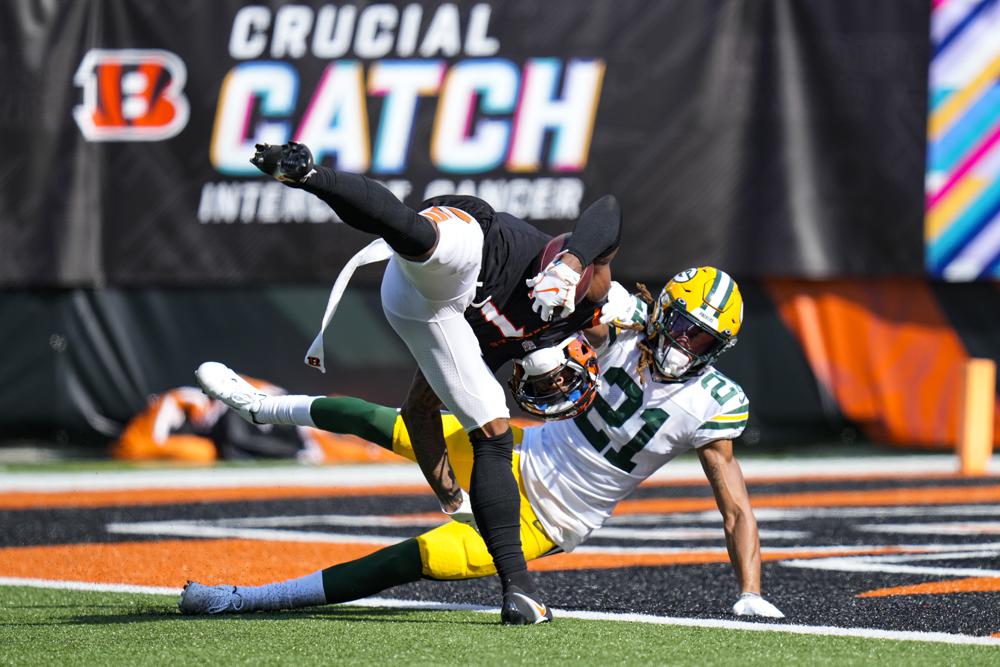 Packers keep finding solutions as they work through injuries

Packers keep finding solutions as they work through injuries

They’re missing their 2020 All-Pro left tackle, their best pass rusher and their top cornerback. They’re not scoring as frequently or winning as decisively as they did last season.

Yet somehow and some way, the Green Bay Packers have made it through the first five games of the season with the same 4-1 record they owned a year ago.

They’re just making their victories a little more suspenseful this year. Consider the Packers’ 25-22 overtime victory at Cincinnati on Sunday a prime example.

“That just goes to show the type of men we have in our locker room,” Packers linebacker De’Vondre Campbell said after the game. “Nobody flinched. Nobody complained. Nobody did anything but their job and we were able to handle business and get the victory. That’s what good football teams do. They find a way to get it done.”

Twice in the last three weeks, the Packers have nearly lost a game they controlled most of the way, only to find a way to win at the end. Mason Crosby has played a major role both times, for very different reasons.

Crosby kicked a 51-yarder as time expired to give the Packers a 30-28 victory at San Francisco after the 49ers scored a go-ahead touchdown with 37 seconds left. In the Bengals game, Crosby ended a franchise-record string of 27 consecutive successful field-goal attempts by missing three straight to keep the Packers from wrapping up the victory before he finally made a 49-yarder in overtime.

“We stuck together and that’s all that mattered at the end,” running back Aaron Jones said. “We didn’t blink or flinch. That’s the testament of a good team.”

So is the Packers’ ability to withstand injuries.

Those types of contributions have helped the Packers continue figuring out ways to win when they’re not at full strength.

The top playmakers on offense – Rodgers, Jones and 2020 All-Pro receiver Davante Adams – are making plays. This marked the first time in franchise history that the Packers had a 300-yard passer, 100-yard rusher and 200-yard receiver in the same game.

Adams had 11 catches for a career-high 206 yards and one touchdown. He has 42 receptions for 579 yards this season to lead the NFL in both categories. … Campbell continued his fast start to the season by intercepting a pass in overtime.

Crosby had his worst day as a pro since Oct. 4, 2018, when he missed four field goals and an extra point in a 31-23 loss to the Detroit Lions. This time, Crosby missed three field goals and an extra point before making the winner in overtime. … TE Robert Tonyan, who had 11 touchdown catches last season, was held below 10 yards receiving for the fourth time in five games.

CB Kevin King joined the long list of injured Packers when he hurt a shoulder Sunday.

2 – number of field-goal attempts Crosby had missed since the start of the 2019 season heading into Sunday.

The Packers go back on the road to face the Chicago Bears, who are a game behind them in the NFC North after winning 20-9 at Las Vegas on Sunday. This is the second game in a five-game stretch that features four road contests.

TOP PHOTO: FILE – Cincinnati Bengals wide receiver Ja’Marr Chase (1) flips into the end zone on a failed touchdown-attempt as he is hit by Green Bay Packers cornerback Eric Stokes (21) in the second half of an NFL football game in Cincinnati, Sunday, Oct. 10, 2021. (AP Photo/AJ Mast)