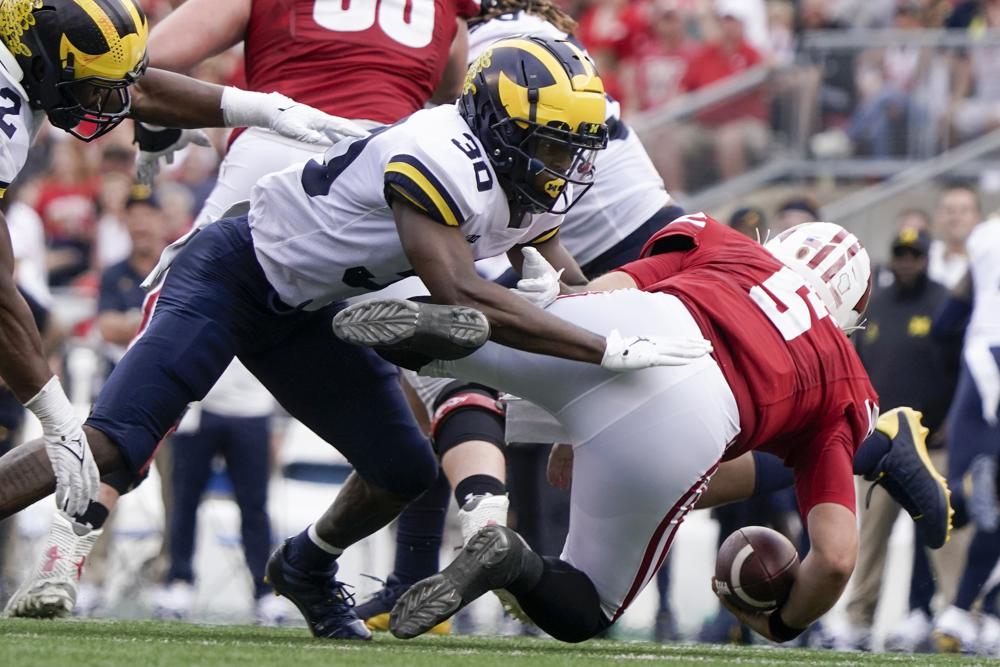 MADISON, Wis. (AP) — Wisconsin is listing quarterback Graham Mertz as questionable for Saturday’s game at Illinois after a chest injury knocked him out of the weekend loss to Michigan.

Mertz didn’t return to the Michigan game after Daxton Hill sacked him early in the third quarter of the Wolverines’ 38-17 triumph. Mertz expressed optimism Monday that he’d be able to play against Illinois (2-4, 1-2 Big Ten).

“I was out there today,” Mertz said after practice. “I’ll just go with it day by day.”

Mertz was taken to the hospital for evaluation after his injury and got released later Saturday. Wisconsin coach Paul Chryst said all the test results were encouraging.

“I feel all right,” Mertz said. “I’m just kind of taking it day by day, getting treatment and trying to get better every day.”

Tight end Jake Ferguson also is considered questionable for this week after leaving the Michigan game early due to a chest injury.

Wisconsin (1-3, 0-2) is trying to recover from its worst start since 1990 as the Badgers prepare to face one of their former head coaches for the first time in program history. Illinois coach Bret Bielema coached Wisconsin from 2006-12 before leaving for Arkansas.

Mertz has completed just 56.4% of his passes for six interceptions and just two touchdowns, but he had led two straight scoring drives just before his injury. That included a three-play, 63-yard drive that took just 15 seconds and culminated with an 18-yard touchdown pass to Chimere Dike.

“I felt like we were just clicking, making plays together, playing the ball we want to play as an offense,” Mertz said. “We definitely want to build on that.”

Wisconsin’s inability to compete with Michigan after Mertz’s injury underscored his value to the team..

Wisconsin trailed Michigan 13-10 on Saturday when Mertz and Ferguson both left the game. Michigan proceeded to score 25 straight points.

Chase Wolf took over for Mertz and went 3 of 8 for 52 yards with a touchdown, interception and fumble. Wolf hasn’t started a game since his senior season at Cincinnati’s St. Xavier High School in 2017.

“I prepare each week as if I’m the starter, but I think playing that half against a good team like Michigan will build some confidence in me because I haven’t been hit like that in four years, since high school,” Wolf said. “So it was good to kind of knock the rust off there. If I do happen to play this weekend, I’ll be ready.”

NOTE: Wisconsin has released details of the raise for Chryst that the Board of Regents approved last month. Chryst will receive $5.25 million annually, up from $4.35 million. Chryst took a temporary 15% pay cut last year to help cut costs during the pandemic.