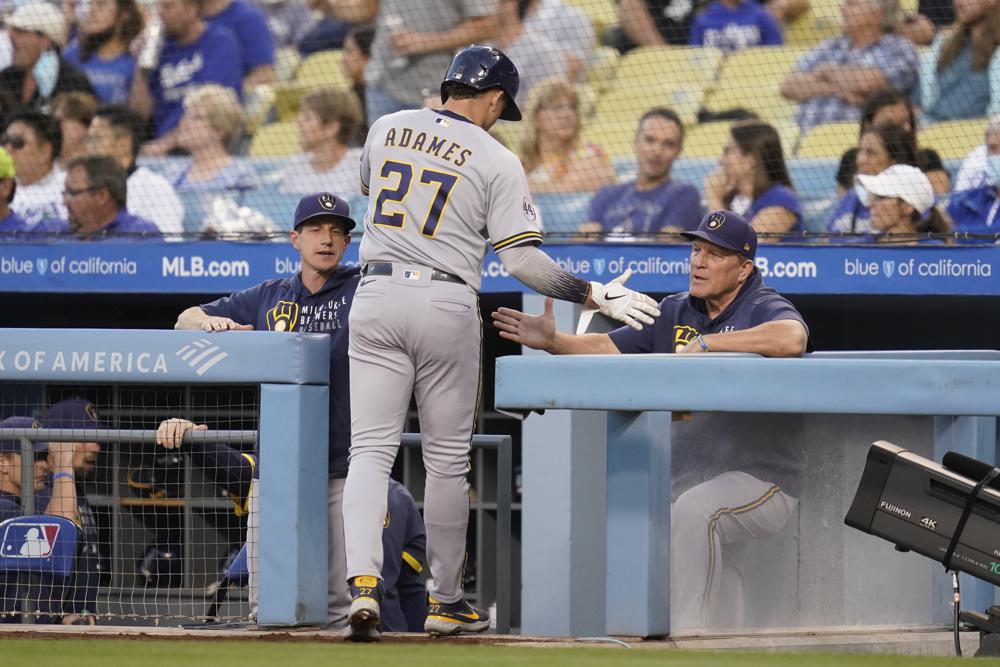 LOS ANGELES (AP) — One last game, one last chance for the streaking Los Angeles Dodgers to grab a share of their ninth consecutive NL West title.

The playoff-bound Dodgers (105-56) must beat Milwaukee again on Sunday and hope the rival first-place Giants (106-55) lose again to San Diego to tie for the title. That would send them and the Giants to a deciding Game 163 in San Francisco on Monday.

“If we don’t win, it doesn’t matter what anyone else does,” third baseman Justin Turner said.

Julio Urías became the Dodgers’ first 20-game winner since Clayton Kershaw in 2014, pitching one-run ball into the seventh inning as Los Angeles beat the Brewers 8-3 on Saturday night to extend the NL West race to the final day of the regular season.

“The only focus for us is to win tomorrow,” manager Dave Roberts said. “That’s all we can control.”

The Giants lost to San Diego earlier Saturday, reducing their lead to one game. The Dodgers were watching before their game began.

“There was a good buzz going around the clubhouse heading into the game knowing the opportunity for us,” Turner said.

The Dodgers or the Giants are guaranteed to have the most wins of a team that fails to finish first, bettering the 1909 Chicago Cubs and 1942 Brooklyn Dodgers, who had 104 wins each.

Urías (20-3) gave up one hit, struck out seven and walked two over 6 1/3 innings in his 32nd start of the regular season, becoming the majors’ only 20-game winner this year. The 25-year-old left-hander retired 16 in a row after allowing a double to Eduardo Escobar in the first.

“The focus, adrenaline and energy level was all at peak position knowing what was at stake,” Urías said through a translator.

Urías left in the seventh as part of a double switch, handing the ball to Roberts, who grabbed his arm to chat before the pitcher walked off to a standing ovation from the crowd of 49,705.

“He just said, ‘Great job, great season,’” Urías said. “I was very pleased and very happy with the ovation of the crowd.”

He finished his first full season in the rotation with a 2.98 ERA and 195 strikeouts.

“It’s a dream season. Very blessed and very thankful,” Urías said. “I was very blessed all year to stay healthy.”

Kershaw won 21 games in 2014, when he earned the last of his three Cy Young Awards. He watched from the dugout. Urías became the fourth Mexican-born pitcher to win 20 games in the majors, joining former Dodger Fernando Valenzuela and Milwaukee’s Teddy Higuera (both 1986) and Esteban Loiaza of the Chicago White Sox (2003).

“It’s a feather in his cap winning 20 games. Those are hard to come by these days,” Roberts said. “It’ll be something he’ll always remember and be proud of.”

The Dodgers got a three-run homer from Turner in the first, a two-run blast by AJ Pollock in the fourth, and a solo shot by Corey Seager in the fifth, giving them 17 homers in their last four games. Max Muncy’s RBI double in the eighth made it 8-1.

Trea Turner went 2 for 4 to extend his career-high 18-game hitting streak and all but lock up the NL batting title with a .328 average. His closest competition, former Washington teammate Juan Soto, went 0 for 3 against Boston, dropping his average to .315.

Trea Turner will become the first Dodger to win a batting crown since Tommy Davis claimed back-to-back titles in 1962 and ’63.

Christian Yelich’s fielder’s choice groundout scored Willy Adames, who walked, to give the NL Central-champion Brewers an early lead. Urías walked Adames again with two outs in the sixth before Escobar struck out swinging to end the inning.

Adames homered off David Price in the ninth for the Brewers’ first hit and first run since the first inning. Tyrone Taylor added an RBI single. Escobar doubled for his 1,000th career hit in the inning.

“That’s a number that’s nice to achieve,” Brewers manager Craig Counsell said. “He didn’t walk in as an everyday player. He worked into that and made himself a dangerous player.”

Milwaukee’s Corbin Burnes (11-5) made a brief start, pitching just two innings. The right-hander whose name has been in the Cy Young Award conversation gave up three runs and two hits, struck out four and walked one. He finished the regular season with an NL-best 2.43 ERA.

The Dodgers tied the franchise record for consecutive home wins set by the Brooklyn Robins. They won 14 in a row at Ebbets Field from April 21-May 12, 1921. LA has won six in a row overall.

Dodgers: Kershaw (left forearm discomfort) went on the IL. He will undergo tests on Monday.

Dodgers: RHP Walker Buehler (15-4, 2.49) starts but his innings could be limited with the postseason days away.

TOP PHOTO: Milwaukee Brewers Willy Adames (27) returns to the dugout after scoring during the first inning of a baseball game against the Los Angeles Dodgers Saturday, Oct. 2, 2021, in Los Angeles. (AP Photo/Ashley Landis)