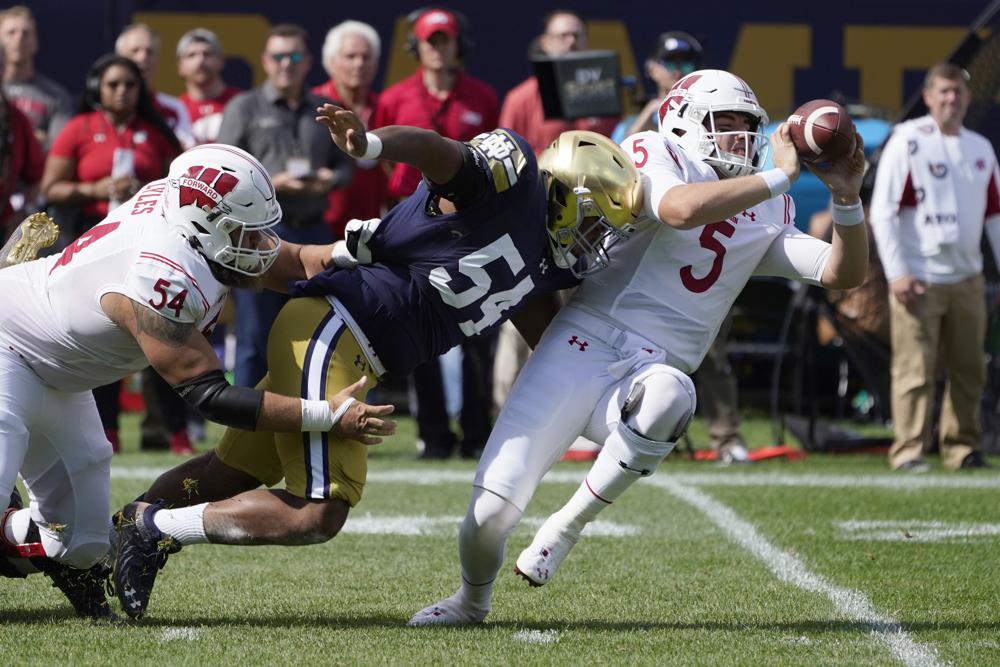 Mertz was 18 for 41 for 240 yards with four interceptions and a fumble in the Badgers’ 41-13 loss to Notre Dame on Saturday. He threw two pick-sixes in the game’s final 2 minutes, 13 seconds.

Chryst said Monday his message to the sophomore is to stay positive. Mertz has thrown only one touchdown pass along with six interceptions this season.

“What can we do to help him?” Chryst said. “Hope is not a method. What can we do to make progress, and I think you also have to tie in everyone with it. It’s also what’s awesome about this game is that it’s a team sport.”

Wisconsin (1-2, 0-1 Big Ten) needs its offense to improve dramatically as the Badgers prepare for Saturday’s home game with No. 14 Michigan (4-0, 1-0), their third meeting this season with a ranked foe. Wisconsin has lost its last seven matchups with Top 25 teams.

The Badgers’ depth chart lists Mertz as the starter. Chase Wolf, the backup, has been intercepted three times out of 11 pass attempts since the start of the 2020 season.

Mertz said footwork, accuracy and reads are all priorities.

“You’re going to have games where you have an interception, and it’s how you react after that,” Mertz said. “How you grow and learn from it.”

“It’s trusting my process and I’m working through stuff,” he said. “It’s working to be more complete, play better football and score some touchdowns.”

One area that Chryst said he expects improvement is with Mertz and his communication with the running backs. The Badgers gained 74 yards on 28 carries for an average of 2.6 yards per rush against Notre Dame. The 74 rushing yards were a season low for the Badgers.

During two different series in the third quarter, running backs Chez Mellusi and Isaac Guerendo weren’t in the right spots in the lineup. Prior to the snap, Mertz moved them from the slot to the backfield.

“It’s making sure that they know it,” Chryst said of the running backs. “If they don’t, they go to him. We didn’t have a lot of game plan specific things that way, where it should have been tricky or anything.”

The Badgers’ have also hit a rough spot with third-down conversions. The Badgers are 13 of 47 on third downs (27.7%) through three games. They were 1 of 14 against Notre Dame.

Wisconsin ranked seventh in the Big Ten last season with a third-down conversion rate of 38%.

“We’ve been in good situations and haven’t converted well,” Chryst aid. “Third-and-shorts aren’t at a percentage that we would like. It would be a lot easier if it were one guy or one thing to replace or fix. That goes on me and on us. We’ve got to get that corrected, and that’s stating the obvious.”