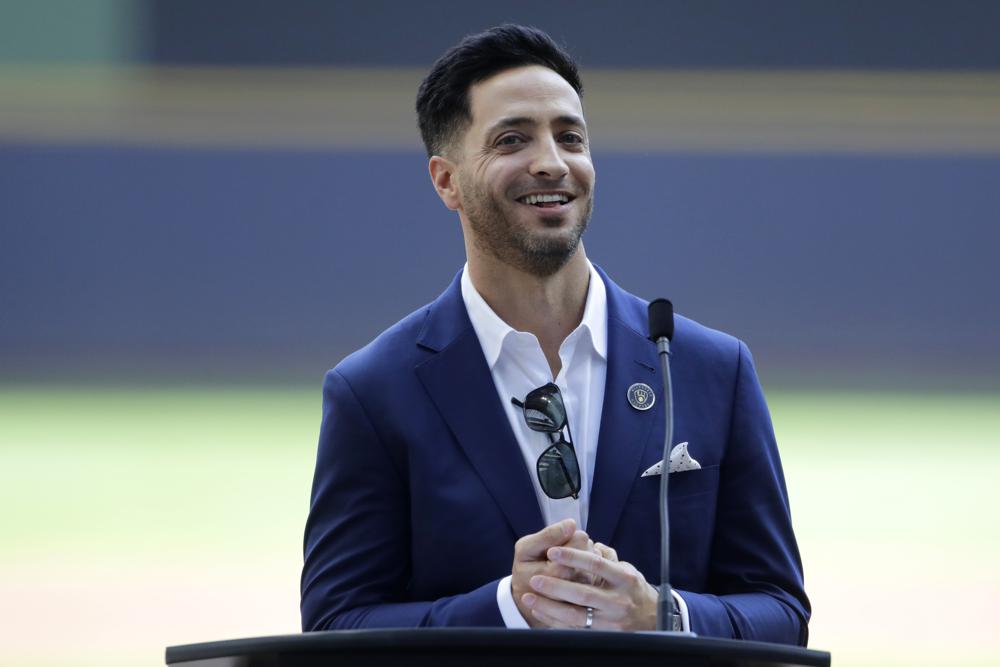 MILWAUKEE (AP) — Ryan Braun threw out the ceremonial first pitch before the Milwaukee Brewers’ game Sunday as part of his farewell, a 30-minute celebration of a 14-year major league career that included the 2011 NL MVP award and a lengthy suspension for a drug violation.

Now 37, Braun hasn’t played all season and said during spring training that he was leaning toward retirement. He announced on Sept. 14 that he would not play again.

“My emotions today and over the last few weeks have admittedly been very mixed,” he said during a news conference before the game. “It starts with overwhelming gratitude and joy, but there is also a real sadness that it’s over, that this has actually come to an end.”

A six-time All-Star, Braun played his entire big league career with the Brewers from 2007-20.

“Thank you for picking me up when I fell down,” Braun told the appreciative crowd.

The ceremony came before the NL Central-leading Brewers hosted the New York Mets.

“It’s very rare in today’s game for any athlete to have that chance,” Braun said of playing for just one team. “I feel incredibly blessed and incredibly fortunate that it worked out that way.”

“What was special was his consistency,” owner Mark Attanasio said.

The Brewers declined their half of the mutual option in Braun’s contract for 2021, paying him a $4 million buyout rather than the $15 million he would have received. Braun flirted with the notion of returning to the Brewers during the 2021 season.

“We discussed it, multiple times,” Braun said. “We discussed it throughout the course of the season. Both in July and August, we had pretty serious conversations about it. It never got to the point where like I felt it was imminent.”

He was suspended in 2011 for 50 games for violating baseball’s drug agreement but the players’ association successfully overturned the penalty, persuading arbitratoir Shyam Das that protocols for the chain of custody for the sample were not followed.

Braun was suspended in July 2013 for the final 65 games of the season for violations of the drug program and labor contract following baseball’s investigation of the Biogenesis of America anti-aging clinic. He issued a statement then that said: “I am not perfect. I realize now that I have made some mistakes. I am willing to accept the consequences of those actions.”

“Certainly, as I reflect on my career, it was not perfect, and I am at peace with that,” he said Sunday. “If I had the opportunity to go back and do some things differently, I absolutely would, but I don’t have that chance.”