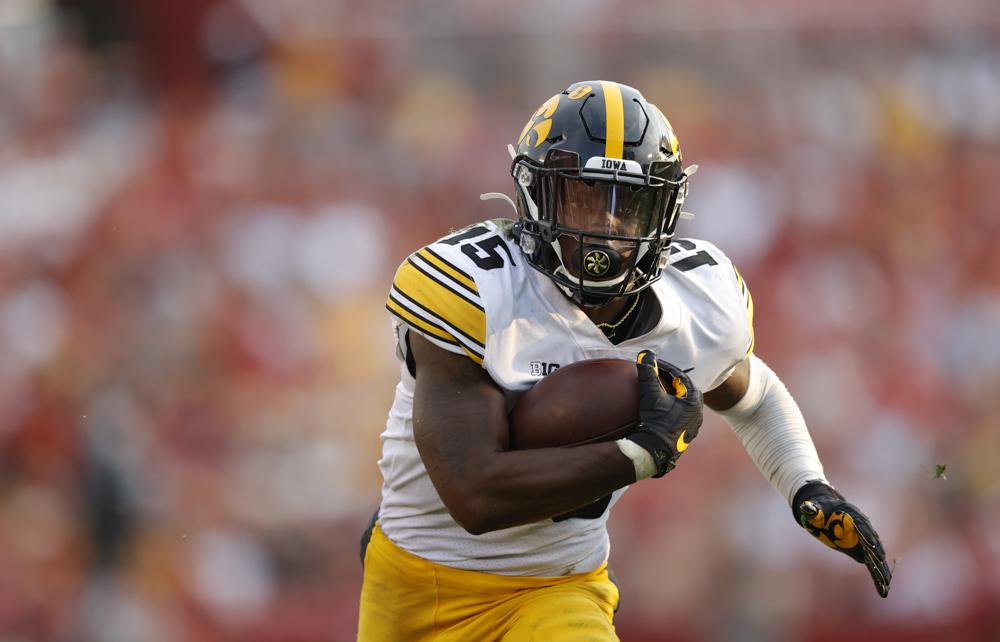 No. 5 Hawkeyes looking for more consistency from offense

No. 5 Hawkeyes looking for more consistency from offense

IOWA CITY, Iowa (AP) — Thanks to a strong defense, No. 5 Iowa has its highest ranking since 2015. The Hawkeyes need more production from their offense if they’re going to stay there.

“Obviously we haven’t done as good as we think we can as an offense,” left tackle Mason Richman said. “And I think that’s exciting, especially after winning both games. It means we can keep getting better, keep improving as a unit.”

The Hawkeyes (2-0, 1-0 Big Ten) beat consecutive ranked opponents in Indiana and Iowa State. But they are last in the Big Ten in rushing, passing and total offense and three of the team’s seven touchdowns have been scored by the defense.

“We’ve gotten a lot of help from our defense,” tight end Luke Lachey said. “It’s a team sport, and we’ll take that, for sure. But our offense isn’t where we think it can be, and it starts everywhere.”

The Hawkeyes got two interception returns for touchdowns from cornerback Riley Moss in the 34-6 season-opening win over Indiana. Linebacker Jack Campbell had a fumble return for a touchdown, and Iowa got 20 points off four Iowa State turnovers in last Saturday’s 27-17 win. Iowa’s defense has forced seven turnovers, leading to 37 points, to start the season.

The Hawkeyes had minus-6 yards of offense in the third quarter against Iowa State but scored 10 points in the quarter on Campbell’s return and Caleb Shudak’s field goal set up by an interception by linebacker Seth Benson.

Punter Tory Taylor has been a part of the Hawkeyes’ success as well. Taylor ranks sixth nationally with an average of 50.4 yards per punt, with seven of his 14 going for 50 yards or more and six punts landing inside the opponents’ 20-yard line.

“Tory does a great job of pinning teams back inside the 10,” receiver Charlie Jones said. “He’s one of the best, if not the best.”

The expected playmakers on offense have been steady without a lot of impact.

Quarterback Spencer Petras, in his second season as a starter, has completed 24 of 48 passes for 251 yards and a touchdown. Running back Tyler Goodson has 154 rushing yards and two touchdowns. Tight end Sam LaPorta leads the team with six catches for 104 yards.

The Hawkeyes’ offensive line is young outside of center Tyler Linderbaum, a preseason Associated Press All-American. Richman is a redshirt freshman, right tackle Nick DeJong is a sophomore, right guard Justin Britt is a sophomore and left guard Cody Ince is a junior.

Senior right guard Kyler Schott, who broke his foot in a farm accident before preseason practice began, is expected to return Saturday against Kent State.

“I look at our football team coming out of August, we’re young at both lines, from an experience standpoint,” coach Kirk Ferentz said. “You look at the offensive line, we expected some bumps, at least I did. It was part of the process. I am pleased with how the guys have held up. What I would be concerned about is if we didn’t see continual growth.”

It has helped that the Hawkeyes have built big leads in both games. They led 31-3 at halftime against Indiana and had a 27-10 lead early in the fourth quarter against Iowa State. That has allowed the offense to play at a different tempo.

“We want to be as aggressive as possible,” Jones said. “But that’s kind of out of our control a little bit. That’s up to the coaches.”

Ferentz said he expects there will be improvement.

“Certainly we don’t have the consistency we need,” he said. “But it will come.”