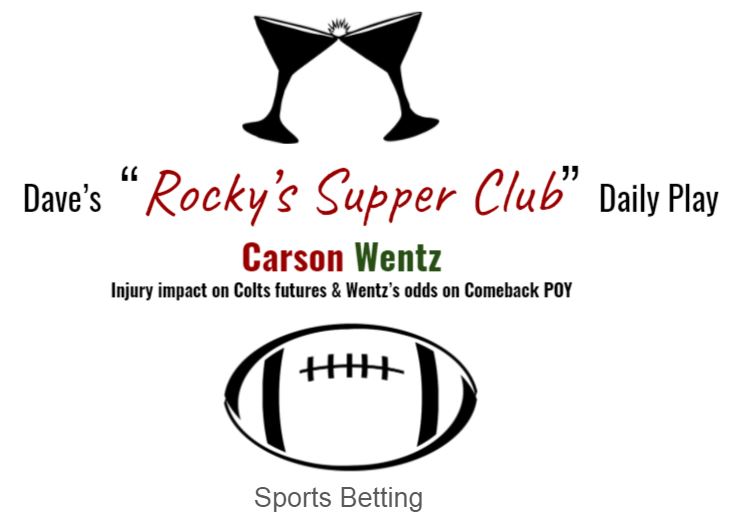 Carson Wentz, the guy who just can’t catch a break on the injury front, is out anywhere between 5-12 weeks according to Colts head coach Frank Riech.

This is BAD for Wentz, and BAD for the Colts who don’t have any legitimate back up plan for Wentz since the loss of Jacoby Brissett and lack of free-agent signal callers on the market. Many expect the Colts to make a play for Bears 3rd stringer, and the guy who emasculated Wentz in Philly, Nick Foles.

Imagine you’re Wentz, who was having an MVP season in 2017 before an injury forces him to miss the remainder of the season, Nick Foles steps in and wins the franchise’s only Super Bowl. That’s pretty bad. Now imagine you’re Wentz, get to a new team with a new lease on life and BAM, you’re out again, and BAM you’re replaced by Nick Foles again.

Ouch. That’s like “sports nightmare” stuff right there. But, if the Colts are lucky, that’s what will happen. If they’re not so lucky, this season could be an absolute disaster on the field, and for those that put any money on the Colts to do something in the division, conference, or Super Bowl.

Looking at the impact of the Carson Wentz injury, we can already see significant line movement on Colts futures with the Colts, who were already 2nd in their division on the odds market, are now even further in the hole. They’ve seen their odds lengthen from +115 to +180. Meanwhile, the Titans’ odds have shortened from -115 to -134.

The Colts odds to win the AFC have also lengthened. Prior to the injury, the Colts were given +1400 odds, the 5th best on the market. Now they’re given +1800 odds, 8th best and tied with the Patriots.

Carson Wentz was also among the favorites to win the Comeback Player of the Year at +1000, now he sits at +2500. Without Wentz playing at that kind of level, the Colts aren’t in a position to compete. If anything, these odds changes are lenient for the Colts, and only because oddsmakers don’t know how long he’ll be hurt. Look for the Colts’ odds to tank with each passing week unless either they make a move for a new QB or Jacob Eason turns into a starting-caliber player.