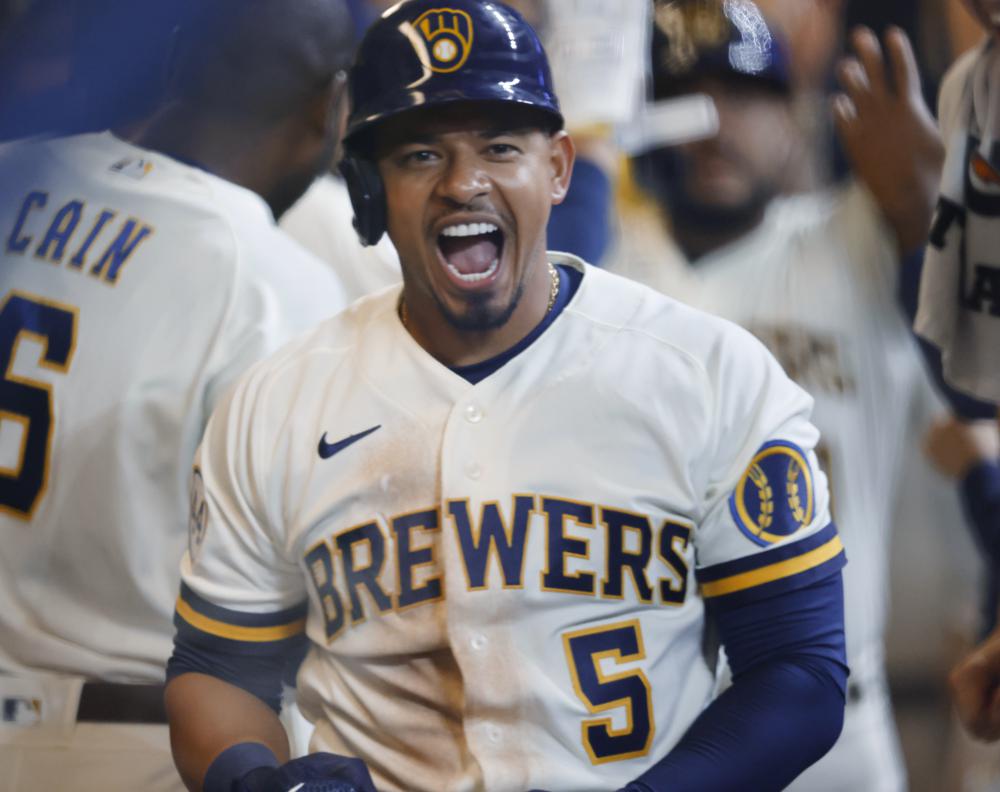 MILWAUKEE (AP) — Eduardo Escobar hit a three-run homer and an RBI triple to back up Eric Lauer’s five shutout innings in the Milwaukee Brewers’ 6-2 victory over the Pittsburgh Pirates on Monday night.

Escobar’s two-out triple off Kyle Keller in the sixth extended the Brewers’ lead to 2-0. He followed that up by sending a 421-foot drive to right against Nick Mears in the seventh.

Escobar also walked twice to reach base on each of his four plate appearances. This marked his first home game for the Brewers since Milwaukee acquired him from the Arizona Diamondbacks on Wednesday.

Pittsburgh trailed 6-0 heading into the ninth but brought the tying run to the plate after John Axford and Brad Boxberger each issued bases-loaded walks. Boxberger ended the comeback attempt by striking out Phillip Evans to earn his fourth save in six opportunities.

Bryse Wilson (2-4) worked five innings and allowed just one run in his Pirates debut, but the Brewers feasted on Pittsburgh’s bullpen after his departure.

Wilson came to the Pirates along with minor league pitcher Ricky DeVito in a Friday trade with Atlanta.

Lauer (4-4) allowed just three hits, struck out three and walked nobody. He also hit a batter. In his last six appearances, Lauer has given up only five runs over 31 1/3 innings.

The Brewers took the lead for good in the third inning. Lorenzo Cain led off with an infield single, stole second, moved to third on Lauer’s bunt hit and scored on Kolten Wong’s sacrifice fly.

Milwaukee broke the game open with a pair of two-out rallies against Pirates relievers.

The Brewers had a runner at first with two outs in the sixth when Escobar brought home Omar Narváez with a triple into the right-field corner. Keller walked Tyrone Taylor on a 3-2 pitch outside with the bases loaded to extend Milwaukee’s lead to 3-0.

Mears’ problems in the seventh started when Kolten Wong hit a one-out single that went off the right-hander’s leg. Mears remained in the game after throwing a few warmup tosses, but he was ineffective and gave up the three-run blast to Escobar that made it 6-0.

Axford filled Hader’s spot on the roster after the Brewers acquired him from the Toronto Blue Jays earlier in the day. Axford pitched for the Brewers from 2009-13, but Monday marked his first major league appearance since 2018.

This three-game series continues Tuesday night with a matchup of right-handers as Max Kranick (1-2, 7.31 ERA) starts for Pittsburgh and Adrian Houser (7-5, 3.69) pitches for Milwaukee.

TOP PHOTO: Milwaukee Brewers’ Eduardo Escobar celebrates in the dugout after his three-run home run against the Pittsburgh Pirates during the seventh inning of a baseball game Monday, Aug. 2, 2021, in Milwaukee. (AP Photo/Jeffrey Phelps)

0
0   0
previous Alexander not feeling pressure after huge season for Packers
next Bucks retain one fan favorite, lose another in free agency
Related Posts