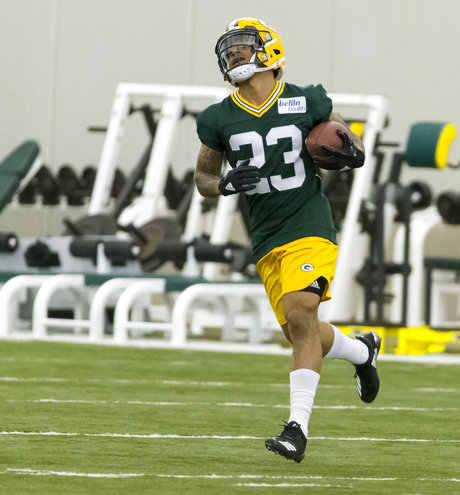 The first-round draft pick made the all-rookie team in 2018. He was a Pro Bowl alternate in 2019. He earned second-team All-Pro honors at the age of 23 last season.

He capped that 2020 season by recording two interceptions against Tom Brady in an NFC championship game loss to the Tampa Bay Buccaneers.

Alexander says he doesn’t feel any pressure heading into his fourth season, even though he’s regarded as one of the league’s bright young stars and has a mammoth contract on the horizon.

“I have strong faith in my abilities and I have a bunch of confidence,” Alexander said after Friday’s practice. “A lot of times, I don’t really pay much attention to that stuff because I know how good I am. So, it’s never any pressure. It’s just another day, me vs. me. Just being the best.”

It’s not only Alexander vs. himself. It’s also Alexander vs. All-Pro receiver Davante Adams, a training-camp matchup pitting star teammates against each other.

Even after lining up against Adams countless times, Alexander says the challenge leaves him “drooling out the mouth.”

Early in Thursday’s practice, Adams got behind Alexander for a long touchdown reception from Aaron Rodgers. Later, Alexander was all over a back-shoulder pass to prevent a completion.

While Alexander relishes the challenge on the field, one of the team’s most charismatic players keeps himself grounded through meditation. Even a few minutes a day, he said, works wonders in keeping himself centered.

Alexander says he “was all over the place” his rookie year, but he’s come a long way in a short time mentally and physically.

Coming out of high school in Charlotte, North Carolina, Alexander was ignored by most major college programs. Alexander went to Louisville, where he intercepted seven passes in three seasons, earned the nickname “Alexander Island” for his ability to eliminate receivers by himself, and landed in Green Bay with the 18th pick of the draft.

Thinking about it got him a little emotional.

“It meant a lot, you know?” Alexander said before taking a deep breath to catch his emotions. “I’m just thankful that everyone else gets a chance to see what I always thought I was. I love the love, because that’s something that was rarely (given) to me. I think it’s cool but, at the same time, it’s also humbling, because I know where I came from, so it always pushes me. I’m one, if that makes sense. I’m the ant climbing up the cold mountain.”