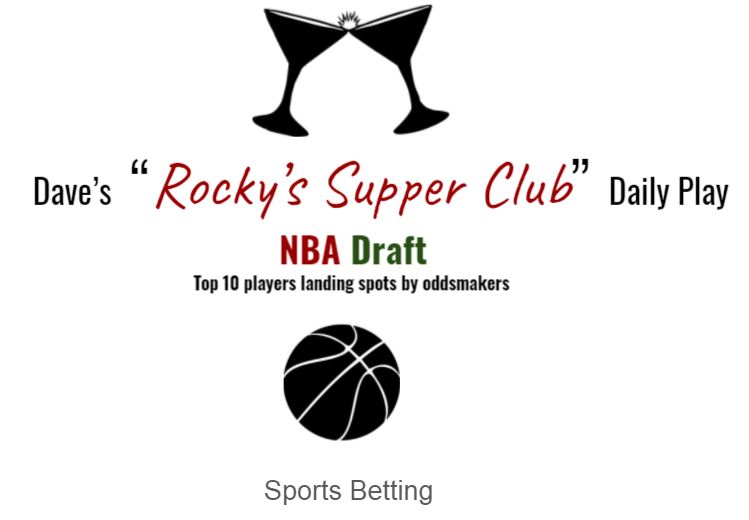 What’s on the table today?: NBA Draft odds for players projected in the Top 10

Ok, full disclosure. I’m an NBA guy. I love the league, the season, the playoffs, the off-season drama, the draft, all of it. Which means, I’m getting pretty stoked about Thursday night’s NBA Draft, which according to multiple league experts is going to be the deepest draft, talent wise, in years.

The Detroit Pistons the 1st overall pick and most oddsmakers have the Pistons take Oklahoma State guard Cade Cunningham with the first overall pick. Cunningham reminds some of a Luka Doncic type, tall guard who can handle, score and distribute while grabbing more than his fair share of rebounds.

Cunningham would definitely be worthy of the number one pick, but because this years’ draft is so loaded with talent, especially at the top, this pick is not a lock. As a matter of fact, Monday’s ESPN reports that the Pistons were considering Cunningham and two other prospects as the 1st pick shows just how deep the 2021 class is.

So, who do the oddsmakers think will go Number 1? Cunningham.

Who do I think SHOULD go Number 1? Jalen Green from the G-League Ignite. Why? Because Jalen Green skipped college and played against PROFESSIONALS in the G-League averaging a whopping 18 points per game. The college game is great and all, and in the Big 12 Cade Cunningham surely saw some good talent, but it’s nowhere near the level of professional talent that Green played against (and dominated) last season.

There is also a growing number of NBA Draft analysts that see USC’s Evan Mobley as a future Chris Bosh/Anthony Davis type of player which is a heck of draft comp to have. I wouldn’t take Mobley over Green but I would consider him over Cunningham. All three of these players are potential 10 time all-stars if things break right which makes this draft so interesting and the Pistons choice at Number 1 so intriguing.

Thanks to our friends at Covers.com below you will find the projected Top 10 in this year’s NBA Draft and the prices you can find from various books to land in their projected slots. The NBA Draft will be held Thursday night at 8pm (CT) from the Barclays Center in Brooklyn.