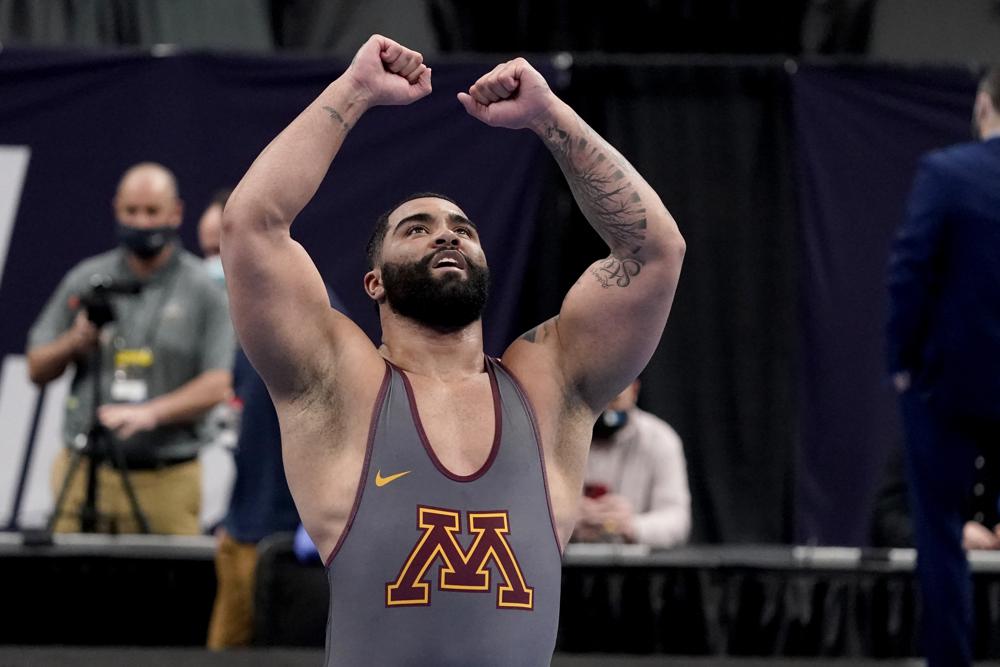 Gable Steveson loves to put on a show — during and after his biggest matches.

Moments after he won at the U.S. Olympic trials at 125 kilograms to qualify for the Tokyo Games, he was taking down the strap on his singlet when he heard the crowd chanting.

Steveson had celebrated wins with backflips before — quite a feat for a man who weighs about 275 pounds. And though he was drained after qualifying for his first Olympics, he couldn’t help himself. The man who aspires to be a World Wrestling Entertainment superstar like his mentor, Brock Lesnar, had to deliver.

“So, I just pulled the strap up and I was like, ‘Forget it, let’s go.’” he said. “I just did the flip, and now everybody requests it everywhere I go. And it’s like my trademark. Like, people are waiting for me to do a flip. And who knows when the next one will be.”

Steveson, 21, hopes to transfer that swagger into becoming one of wrestling’s youngest U.S. Olympic gold medalists. He wants that stage to help launch a career in WWE. Eventually, he hopes to cross over into movies like former WWE star Dwayne ‘The Rock’ Johnson.

Steveson’s stardom was seemingly planned. His mother named him Gable Dan — after wrestling icon Dan Gable. Gable was a two-time national champion wrestler at Iowa State and an Olympic gold medalist in 1972.

Steveson, who is from Apple Valley, Minnesota, said Gable’s name was known around the area.

Steveson has handled the pressure that comes with having that name in the sport. He followed in Lesnar’s footsteps by winning a national championship as a heavyweight for the University of Minnesota. He was the Dan Hodge Trophy winner as the nation’s best college wrestler after a 17-0 season. Then he won the Olympic trials. Now, he could add to his resume in Tokyo.

But for all the showmanship, Steveson is most special on the mat. He has the expected power of a big man, but possesses unusual quickness and agility for a someone his size, allowing him to wrestle differently than most of his opponents.

“Seeing his athleticism and speed, his quickness, his positioning, the way he can turn and create angles — you don’t really see that at heavyweight,” fellow U.S. Olympian Kyle Dake said. “Most of the time, it’s big, strong heavyweights, push, push, push and, you know, they kind of win by having the stronger defense and not making mistakes. Gable’s going out there to wrestle and wrestle a bunch of positions.”

Steveson’s star is rising rapidly. He was photographed with WWE star Roman Reigns and his manager, Paul Heyman, at this year’s WrestleMania — an event Steveson calls the Super Bowl of professional wrestling. He threw out the first pitch at a Minnesota Twins game on June 11. And he said he’s getting used to kids wanting his autograph when he goes to the grocery store.

But he wants to keep things in perspective. In his path to win gold is Turkey’s Taha Akgul — the 2016 Olympic gold medalist. Steveson quoted another WWE icon — “Nature Boy” Ric Flair — when describing what might be ahead.

Steveson said Geno Petriashvili of Georgia also is a dangerous opponent who is “just as good” as Akgul. Petriashvili defeated Akgul to win the world championship in 2019 and is the No. 1 seed.

“It is the Olympic Games,” Steveson said. “Everybody is good. Things can happen. And I’m coming for that gold medal, obviously, just like they are. So it’s going to be it’s going to be a battle.”

TOP PHOTO: FILE – Minnesota’s Gable Steveson celebrates after defeating Michigan’s Mason Parris in their 285-pound match in the finals of the NCAA wrestling championships in St. Louis, in this Saturday, March 20, 2021, file photo. The NCAA heavyweight champion is brimming with confidence heading into the biggest competition of his career. His stardom was seemingly planned from the beginning — his mother named him Gable Dan — after amateur wrestling icon Dan Gable. (AP Photo/Jeff Roberson, File)

NCAA’s Emmert: It is time to decentralize college sports