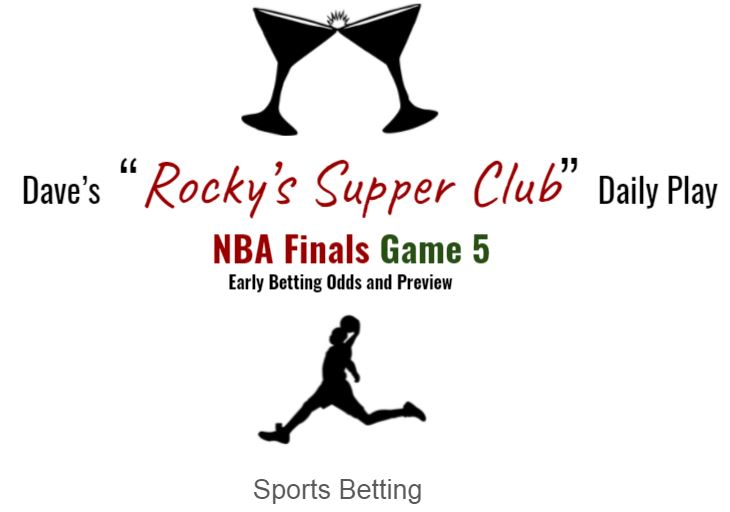 The Milwaukee Bucks did what they needed to on Wednesday night beating the Suns in Game 4 109-103. It wasn’t always pretty, but the Bucks got it done and have now tied the series at two games apiece heading back to Phoenix for Game 5 on Saturday night (8pm WKTY).

Teams that win Game 5 in the Best-of-Seven NBA Finals format have gone on to win the series 72% of the time making this Saturday’s contest a relative “must win” for both clubs.

While the Suns are currently the betting favorite, according to ESPN’s Stats and Information the Bucks have a 51.8% chance to win, with the Suns just under at 48.2%. What this tells me is that even though the Suns are the early favorite, “sharp” money is likely to come in on the Bucks to cover and will also likely push the spread down to somewhere in the (-3) to (-3.5) for Phoenix before tip.

That the past two games have also gone UNDER their predicted total is an indication as to why the number is currently hovering at 218 -218 ½ as opposed to the 220 – 220 ½ we’d been seeing for Games 3&4. If the Suns get off to a hot start with their home crowd, expect this game to go OVER. If the Bucks can keep Chris Paul away from being an effective scorer as they’ve done over the past two, this game will likely fall at right about the total of 218.

By Saturday morning we will have a better idea of where all the money has landed (Suns or Bucks) and will be able to see if there has been anything significant to move the line. In the meantime, if you’ve got a strong feeling the Bucks are going to win straight up, hold on until the number drops to Bucks (+3) or (+3.5) for best value. Otherwise you can take them at (+4) and possibly get some extra juice.

If you think this game is going to be a lower, or higher scoring affair than 218 ½, I’d jump on that total now so you can get the benefit of what we saw from both teams last night, without having to deal with sharp or public money pushing the total.

Game 5 on Saturday night will have pre-game coverage beginning at 7:30pm on WKTY with the tip-off slated for 8pm.