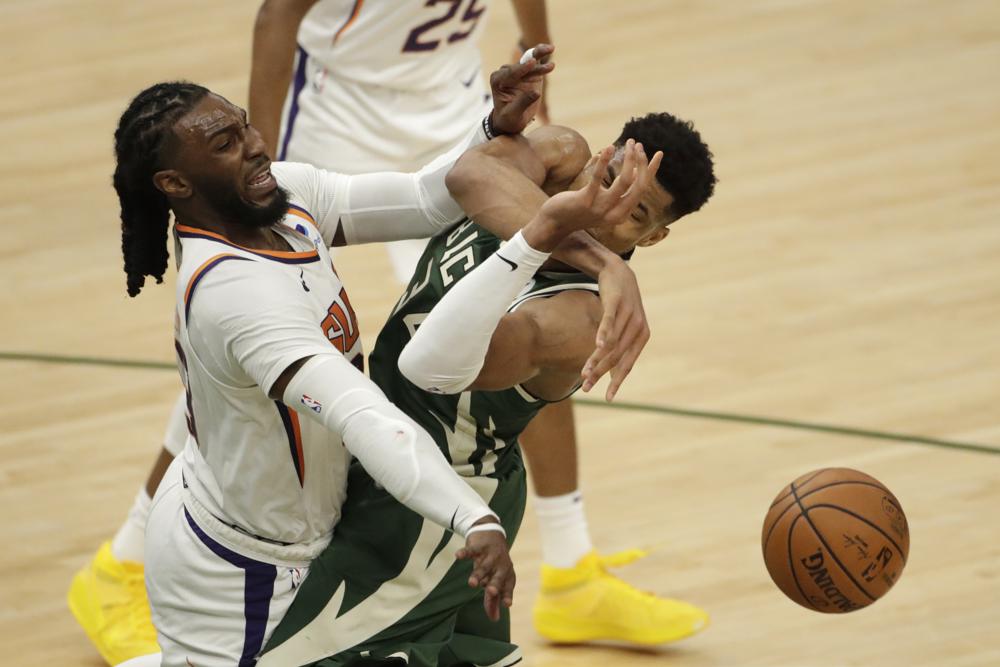 MILWAUKEE (AP) — Giannis Antetokounmpo pointed to a pair of scratches, one on his forehead and the other on his cheek.

Those NBA Finals battle scars are proof, he figures, that the frustrated Phoenix Suns are indeed fouling him.

The Suns may be hacking and whacking him, but they sure aren’t stopping the Milwaukee Bucks star.

Coming off two straight 40-point performances, Antetokounmpo will try to help the Bucks even the series in Game 4 on Wednesday.

And whether playing with pain in his knee or shaking off hits to his face, the Suns know Antetokounmpo is going to keep attacking them.

Antetokounmpo had 41 points and 13 rebounds in the Bucks’ 120-100 victory in Game 3. That followed his 42 points and 12 rebounds in Game 2, making him just the sixth player with consecutive 40-point games in the NBA Finals.

The Suns have already faced LeBron James and Nikola Jokic during this run to their first NBA Finals since 1993, so they’ve had to figure out ways to overcome MVP players.

But Antetokounmpo, with his end-to-end bursts that seem to take just two or three dribbles, is a different type of challenge. Paul said Suns coach Monty Williams’ instructions are just to try to get in the 6-foot-11 forward’s way, but it’s difficult to give too much attention because the Bucks have shooters such as Khris Middleton, Jrue Holiday and Brook Lopez set up around the perimeter.

Paul said the Suns will just stick with their game plan.

“We’re going to keep trying to build a wall,” he said.

Antetokounmpo is used to that.

He recalls it being about two years ago when teams started to employ that defensive strategy of packing multiple players in his path to the basket.

Antetokounmpo still doesn’t enjoy playing against it — “I’m not going to lie; I hate it,” he said — but he’s come to look at it as a compliment, adding that it’s “funny that there’s a defense out there called the Giannis Wall.”

Most importantly for the Bucks, he’s learned how to beat it. Antetokounmpo believes he was already a good passer before teams started using the wall and he’s willing to move the ball to open players when they do. He had six assists in Game 3.

“It’s kind of hard, because you want to be effective, you want to get downhill, you want to do everything, but now you also — you take it personal also,” Antetokounmpo said.

“There’s a team that’s building the wall of three people and two guys behind and trying to stop you. Now you have to not take it personal and make the right play, find the right guy.”

Antetokounmpo shot 17 free throws in Game 3, which Williams noted afterward was one more than the entire Suns team. Asked Tuesday why he chose to complain about it, one of NBA’s most polite people suddenly turned testy.

“They had one player with 17 free throws; we had 16,” Williams said. “That’s not complaining. That’s stating facts.”

But Williams knew from watching the film that the Suns’ problems Sunday started way before any fouls. When Phoenix missed its first shot, Antetokounmpo grabbed the rebound and pushed the ball up the court. The Suns paid too much attention to him and lost track of Holiday, who drifted alone into the corner to take the two-time MVP’s pass for an open 3-pointer.

“It’s a hard truth that you have to do both. You have to be able to show a wall, but also have the integrity of your defense intact on the other side,” Williams said.

Antetokounmpo, two shy of Michael Jordan’s record for consecutive 40-point games in the NBA Finals, could be even better in Game 4. The schedule has had the teams play just once in five days, giving him plenty of time to rest his injured left knee that forced him to miss two games in the Eastern Conference finals.

The Suns hope Devin Booker will also be better after his 3-for-14 shooting in Game 3. He averaged 29 points in the first two games.

“He’s a great player, but he’s human, also,” Bucks coach Mike Budenholzer said. “But I think we’re expecting we’re going to have to be even better on him.”