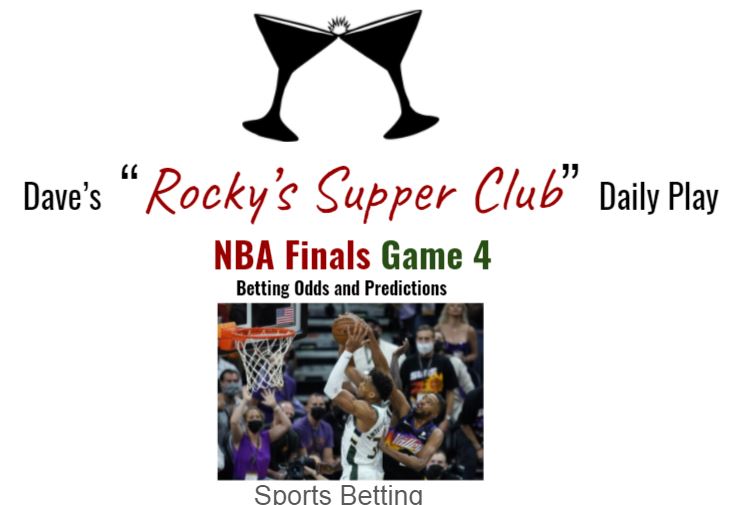 Tonight is the night…Game 4 of the NBA Finals with the Bucks down 2-1 and currently a (-4) favorite with the total sitting at 220 ½ after opening at 219 ½. The spread opened with the Bucks (-3.5) showing that enough money (61% according to Covers.com) coming in on the Bucks and bumping this line up.

After scoring 118 points to win games 1 and 2, the Suns were overwhelmed in the second quarter of Game 3 and couldn’t find their footing. They also had no answer for Giannis Antetokounmpo.

Antetokounmpo scored 20 points in Game 1, his first game in a week due to the knee injury incurred in Game 4 of the Eastern Conference finals against the Atlanta Hawks. Since then, the 26-year-old flipped to bulldog mode. He turned in back-to-back 40-point games (83 total), the first to do so in the Finals since LeBron James. Only Michael Jordan, with four consecutive 40-plus point efforts in the Finals, has sustained a higher level of scoring production.

Even when primary defender Jae Crowder does keep him from getting to the basket, Antetokounmpo has 46 points in the paint since the start of Game 2, making 23 of 25 attempts within 6 feet of the rim.

With tonight’s game being a MUST WIN for the Bucks, and with Giannis showing so much poise, and emotion (to borrow from Mike Schmidt) in interviews this week, I’m REALLY feeling the Bucks right now. In this game, and in this series.

So, now that I’m feeling this Bucks team, how am I going to play tonight’s game? I’m putting together a BIG TIME three-leg parlay that will have me play the spread a couple of ways, and tackle the total. Take a look: