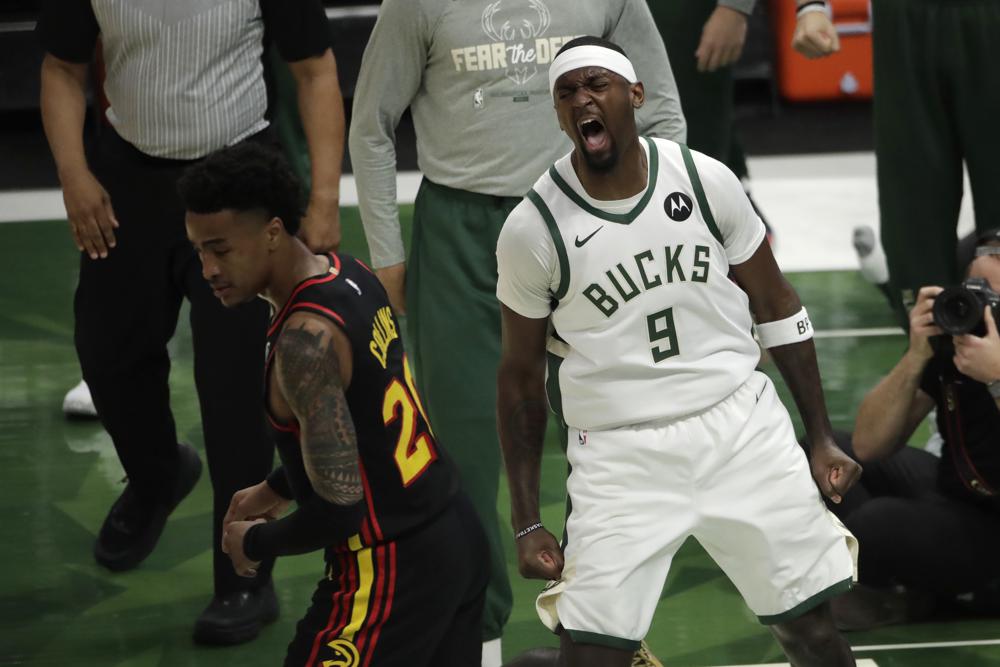 MILWAUKEE (AP) — Milwaukee Bucks forward Bobby Portis is relying on lessons he learned earlier in his career as he adapts to his inconsistent playoff usage.

Portis provided a big spark off the bench, scoring 11 points in 18 minutes in Milwaukee’s 120-100 Game 3 NBA Finals victory over the Phoenix Suns on Sunday. That came after he played just five minutes in a Game 2 loss.

It’s a familiar pattern for Portis, who didn’t play the final three games of the Bucks’ second-round series against the Brooklyn Nets but averaged 12.5 points against the Atlanta Hawks in the Eastern Conference finals.

“I don’t sit and sob or get mad or anything if I’m not playing,” Portis said after Game 3. “I want to win. I came to Milwaukee to try to impact winning and be the best Bobby Portis I can be. Having good coaches and good teammates to just keep me sane, all credit goes to them.”

Portis said one of the first things he learned as a pro is that “nobody is going to feel sorry for you in the NBA.” Portis says veterans such as Taj Gibson, Joakim Noah, Jimmy Butler, Derrick Rose and Aaron Brooks taught him that during his rookie year with the 2015-16 Chicago Bulls.

“They all stayed on me a lot and told me, ‘just stay ready,’ knowing you want to have your moment, but just keep working on your game, staying in shape,” Portis said.

He’s produced a number of memorable moments in this postseason.

When Giannis Antetokounmpo missed the last two games of the East finals with a hyperextended left knee, Portis moved into Milwaukee’s starting lineup and averaged 17 points and 8.5 rebounds in those games.

He isn’t playing as big a role now that Antetokounmpo is back on the floor, but Portis showed Sunday that he still can make a difference. He provided a major energy boost to delight a sellout crowd that continually chanted his first name.

Bucks coach Mike Budenholzer indicated after the game that Portis could have earned himself more opportunities.

“He’s important for us,” Budenholzer said. “I think him helping and finding a place for him is something we need to do.”

Suns forward Cam Johnson said after Game 3 that he’s feeling OK. Johnson had been lying on the floor in pain midway through the fourth quarter after tangling with Antetokounmpo in the paint.

“I took a shot to the rib (that) kind of knocked the wind out of me and in the process my ab cramped up,” Johnson said. “So that’s why I was down on the floor. If any of you all had an ab cramp, you know it’s just kind of tough to move. So I was OK. I just needed a second for it to calm down so I could get up.”

Milwaukee has gotten back into this series by converting offensive rebounds.

Part of that is due to the foul trouble that caused Suns center Deandre Ayton to miss most of the third quarter. But the issues went beyond Ayton’s absence.

The issue will be a major priority for Phoenix heading into Game 4.

“The second-chance points, that was a struggle for us,” Suns coach Monty Williams said. “We know that’s what they want to do. So we’ve got to come up with the 50-50 balls. We’ve got to box out better. That’s on us. We can’t blame anybody else for that.”

TOP PHOTO: FILE – Milwaukee Bucks’ Bobby Portis (9) reacts after dunking during the first half of Game 5 of the NBA Eastern Conference Finals against the Atlanta Hawks Thursday, July 1, 2021, in Milwaukee. (AP Photo/Aaron Gash)