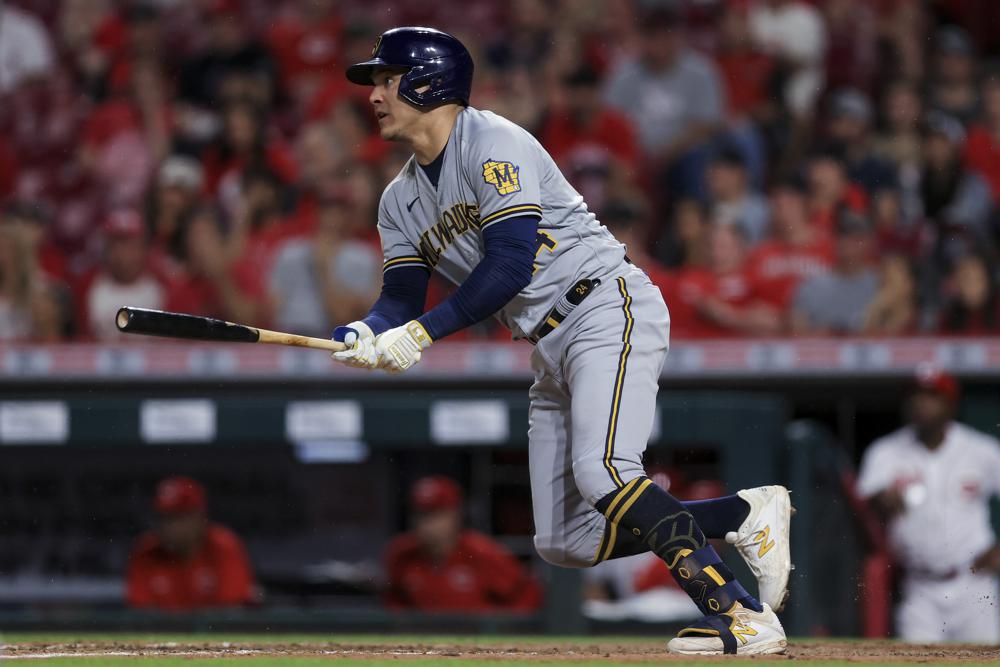 The matchup marked the first of seven straight games between the top two teams in the division  four in Milwaukee and, after the All-Star break, three in Cincinnati. The Reds had won six of their previous seven overall.

Ive just got to be focused and ready, dont try to do too much,” García said. “Im just trying to think, middle-middle, put a good swing on it and see what happens.

Manager Craig Counsell said Garcia has “been very consistent this year and thats important. That consistency has been really helpful. Hes having a really nice power season.

Reliever Devin Williams (6-1) earned the win and Josh Hader pitched a scoreless ninth for his 21st save.

Milwaukee took a 2-0 lead in the first after Reds pitcher Tyler Mahle slipped trying to field an infield hit by García with the bases loaded, then walked home another run.

The Reds went ahead 3-2 in the fifth.

After two walks by Brewers starter Adrian Houser, the Reds loaded the bases for the third time and Jake Cousins relieved for his eighth career appearance.

Cousins’ first two offerings to Tucker Barnhart were wild pitches, each scoring a run. Barnhart hit an RBI single for the lead.

Manager David Bell said Brach has been outstanding for us, weve relied on him heavily. Even though he would never say so, he might be fatigued a little bit.

The first of two doubles by Keston Hiura tied the game at 3 in the sixth.

The Brewers have remained in first place despite their batters posting the NLs lowest batting average, which was .220 entering Thursday, and the most strikeouts.

The Reds loaded the bases in the first and second innings, but came up empty. In the second, Houser escaped with back-to-back strikeouts of Jesse Winker and Nick Castellanos. Both All-Star starters, the pair entered Thursday ranked among the top five in the NL in OPS, slugging and average, with Castellanos .335 average leading the league. They went a combined 1 for 8 on Thursday.

Some fans also paid attention to a second game, on their phones: Game 2 of the NBA Finals between the Milwaukee Bucks and the Phoenix Suns. The Suns won in Phoenix, 118-108, to take a 2-0 lead in the seven-game series.n games.

REDS ON THE MOVE

Cincinnati IF Max Schrock returned from a rehab assignment and then was optioned to Triple-A Louisville. … Minor league OF Darlin Guzman was traded to the Blue Jays to complete the Jan. 22 deal in which the Reds acquired RHP Héctor Pérez.

Reds: Placed RHP Sonny Gray (rib cage strain) on the 10-day IL and recalled RHP Tony Santillan from Triple-A Louisville. Gray made two starts since being activated from a rehab assignment, including a seven-inning outing Wednesday in which he allowed the Royals two runs in a 5-2 win. Gray said he doesnt think he will miss a start.

Brewers: Sent OF Lorenzo Cain to Triple-A Nashville on a rehab assignment. Cain, who hasnt played since May 31, had been on the IL (right hamstring strain). Manager Craig Counsell said Cain would not return until sometime after the teams first series following the All-Star break. … LHP Hoby Milner was optioned to Nashville.

Reds LHP Wade Miley (6-4, 3.06 ERA) faces Brewers LHP Eric Lauer (3-3, 4.11 ERA) on Friday. Miley has pitched six or more innings in each of his five previous starts. He no-hit Cleveland on May 7. In Lauers last two starts, he shut out the Rockies over six innings, then held Pittsburgh to one run in 6S innings.