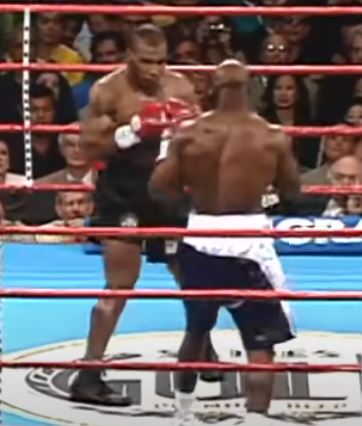 Tyson takes Holyfield’s ear…boxing has never been the same

Tyson takes Holyfield’s ear…boxing has never been the same

Packers hoping homefield is to their advantage this year

On this day in sports history, 1997, Mike Tyson and Evander Holyfield fight for the 2nd time with the WBA Heavyweight Championship on the line.

Most remember this as Mike Tyson’s lowest moment in the ring, and that’s hard to argue. However, as somebody who remembers this fight LIVE, I remember how frustrated Iron Mike was with the headbutts. Not just in this fight, but in Tyson / Holyfield 1, the headbutts were so prominent I’m surprised the ref didn’t call the fight for that alone. They did not of course, which is one of the reasons I believe Mike went so out of his mind crazy.

When Tyson’s rage boiled over, and boil over it did, there was no coming back and the ear-bite is what boxing fans will remember forever as one of the lowest points for a champion…ever.