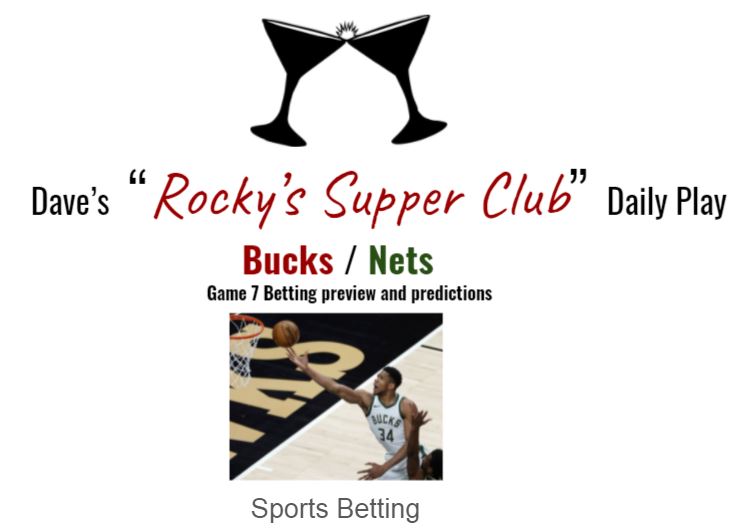 Ok Bucks fans, they did it. The Bucks held on in Game 6 with a 104-89 win to tie the series at 3 games a piece. In this series the home team has won every game.

Khris Middelton scored a playoff career high 38, while Giannis stepped up, hit 6-10 from the line while scoring 30 and grabbing 17 boards. The Nets saw Kevin Durant again go for more than 30, notching 32 and 11 rebounds, but committing 7 turnovers which helped doom the Nets.

For Milwaukee, so much is riding on Game 7. Not just the series, but the potential fate of coach Mike Budenholzer who, if the Bucks do lose, will have seen himself be once more out-coached by a rookie head coach. Remember, Nick Nurse of the Toronto Raptors was in his first season when the Raptors defeated the Bucks in 6 games and went on to win the Championship. Saturday night’s Game 7 very well may determine the future of coach Bud in Milwaukee.

When the lines opened for Saturday’s game (7:30pm WKTY), the Bucks were favored by 1.5 points (-1.5), but as of the writing of this column, the game is now a consensus “Pick Em”, which gives no points to either the Bucks or the Nets. This is the catch all, “we don’t know who’s going to win” from oddsmakers.

The total is also a “Pick Em” right now at most books, MGM the only Vegas property currently taking plus or minus money on the total with 215 ½ being set as the number.  I would take the UNDER 215 1/2 in this spot.

Odds makers see this game as a tough one to handicap, and that’s fair. This series has been a wild pendulum swing from one extreme to the next, with Brooklyn looking like world-beaters in Games 1 and 2, before losing Harden and Irving, and falling flat in Games 3 and 4. Game 5 was the Bucks to lose, and they did, surrendering a 17 point second half lead while watching KD have one of the best playoff performances of all-time going for 49, 17, 10.

Without much to go off of at this time, I’d recommend in-game wagering where available. Once the ball starts bouncing lots of opportunities will be out there and you may come across some real juicy props.

For me, this is simple. The Bucks NEED to win, and I think they CAN, but won’t. I have the Nets winning Game 7 in a lower scoring affair, something along the lines of 105-98.

If I were betting this morning (which I’m not, I’m going to wait for in-game wagers), I’d take the Nets as a “Pick Em”. However, I’ve not wanted to be wrong SO bad, in SO long, so my actual hope is that by taking the Nets, the Bucks will actually win. That’d be a loss of a couple of bucks for me, but a win for the real BUCKS, who need to show themselves, and the fans the team was right to sink all of their eggs into the Giannis, Middleton, Holiday basket.