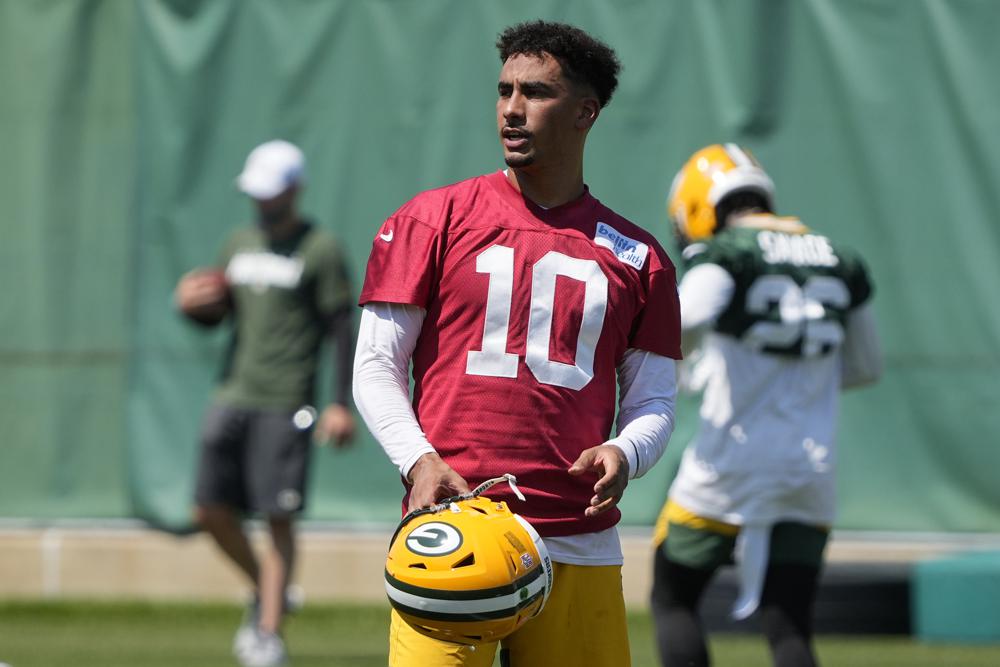 But the situation certainly does appear to be impacting the second-year pro’s workload.

As a rookie, Love didn’t play a single down and never participated in any preseason games due to the pandemic. With Rodgers sitting out Green Bay’s mandatory minicamp, the Packers now must prepare for the possibility Love could open the season as their starting quarterback.

“My mindset this whole offseason’s been to get ready, get myself ready, and that’s been my mindset since I got here,” Love said Wednesday. “Whether Aaron was here or not here, that’s going to be my mindset regardless, because I have to get myself ready to play and be able to go out there and take charge of the team and be able to perform at a high level and do my best so everybody else can do their jobs as well.”

Love has been considered Rodgers’ eventual successor ever since the Packers traded up four spots in last year’s draft to take the former Utah State quarterback with the 26th overall pick.

When ESPN reported just before this year’s draft that Rodgers doesn’t want to return to the Packers, it became apparent Love might need to take over as soon as this season.

“I’ve just been living my life, man, trying to do what I can do to get better in this offseason and obviously not knowing what’s going to happen next,” Love said.

Love has received much of the work with the first-team offense in the first couple of days of minicamp. Packers coach Matt LaFleur noted Tuesday that Love “needs every rep he can get right now” due to his inexperience.

Love has shown the ups and downs expected of a player this early in his career. He struggled Tuesday but performed much better Wednesday.

“You’ve got to treat every day as its own entity and you can’t rest on what you did the day before whether it’s good or bad,” LaFleur said Wednesday. “And that’s what we’re looking for from him, and I think he’s done a nice job responding on a daily basis.”

Maintaining focus is a difficult task for any young quarterback, but Love faces even more of a challenge because of the circumstances surrounding his arrival in Green Bay.

General manager Brian Gutekunst didn’t notify Rodgers beforehand that the Packers were going to select a quarterback in the first round. Rodgers said later the Packers’ decision caught him by surprise.

Both quarterbacks say there’s no issue between them.

“With my situation, look it’s never been about the draft pick, picking Jordan,” Rodgers said last month in an ESPN interview. “I love Jordan. He’s a great kid, a lot of fun to work together.”

Love said Wednesday that he and Rodgers have “got a good relationship.” Love said he spoke with Rodgers about a week before heading to Green Bay to begin offseason work, though he didn’t discuss the details of that conversation.

While it’s tough to measure Love’s progress because of his lack of experience, the Packers say they’ve noticed a difference. Quarterbacks coach Luke Getsy said Love is “light years ahead” of where he was a year ago.

All-Pro receiver Davante Adams said this week he’s praying that Rodgers comes back while also offering encouragement for Love. Adams wants to make sure each of Green Bay’s quarterbacks is ready to go if one of them ends up having to take over.

“I think he’s doing a good job right now,” Adams said of Love. “He’s locked in, and I can see, he may be a little bit nervous, but that’s what comes with it, it’s a lot of responsibility, a lot of things on his plate. He’s just got to have his mind right, ready to go. I’m definitely letting those guys know, look, whatever happens, you know you’ll have our support. It’s not your fault you get thrust into a situation if that’s what happens.”

Love is trying to prepare for any situation. That means he doesn’t have any time to worry about what anyone else is saying about Green Bay’s quarterback issues.

“I ust don’t listen to any of the outside noise,” Love said. “I just try and stay true to myself and understand that I can’t control anything that’s going on outside of the building. I can just focus on how I can get better each day and, like I said, control what I can control. That’s all I’m trying to do.”

TOP PHOTO: Green Bay Packers’ Jordan Love runs a drill during an NFL football minicamp Tuesday, June 8, 2021, in Green Bay, Wis. Aaron Rodgers’ absence from the Green Bay Packers’ minicamp means more opportunities for 2020 first-round draft pick Jordan Love, who now must prepare for the possibility he could open the season as a starting quarterback after not playing a single down his rookie year. (AP Photo/Morry Gash)