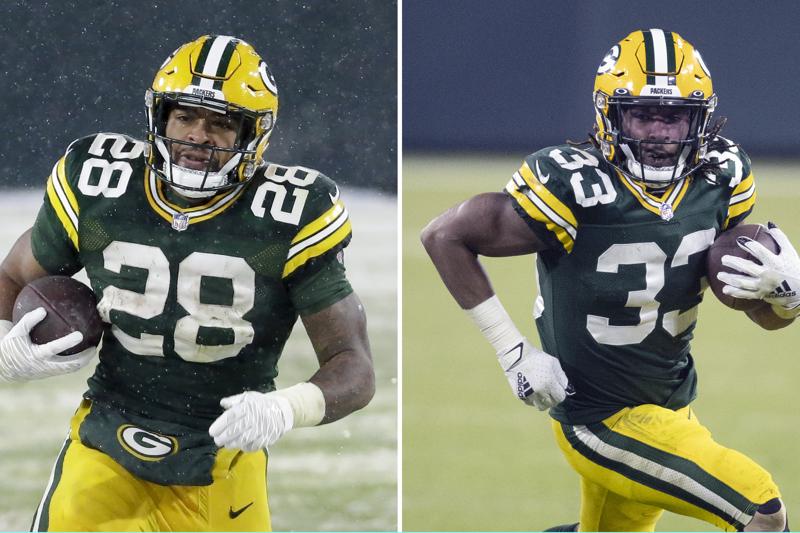 Green Bay’s Aaron Jones has a new running mate in the backfield now that Jamaal Williams has left for the Detroit Lions.

“I think we can be the best running back tandem in the NFL,” Dillon said.

As the Packers conduct voluntary organized team activities without disgruntled MVP quarterback Aaron Rodgers and most of his top receivers, Jones and Dillon are both working out and preparing to lead Green Bay’s rushing attack.

Both have plenty of motivation.

Jones wants to honor his father, Alvin Jones Sr., who died on April 6 at the age of 57. Jones lost his father less than a month after signing a four-year, $48 million contract to remain with the Packers.

“Definitely, the rest of my career will be dedicated to my father,” Jones said. “He’s the reason I started playing football. He’s what kept me going so many times. As a kid when you want to give up, he kept me going.”

Jones credits his father for helping the 2017 fifth-round pick from UTEP develop into a Pro Bowler. Jones and Jim Brown are the only NFL players to rush for at least 3,000 yards and 35 touchdowns while averaging at least 5 yards per carry over their first four seasons.

Dillon is seeking to make the most of his expanded role after a difficult rookie season in which he missed five games due to COVID-19 and spent the entire year behind Jones and Williams on the depth chart. It was a learning experience for a guy who averaged 24.1 carries per game during his college career.

He did manage to rush for 124 yards in a late-season victory over the Tennessee Titans when Williams was out with a quadriceps injury.

“I definitely know what I can contribute,” Dillon said. “So (I’m) just looking to contribute and build on top of that and have more games like that Tennessee game.”

Dillon showed enough potential that the Packers felt comfortable allowing Williams to leave via free agency. The 2017 fourth-round pick from BYU had 1,985 yards rushing and 961 yards receiving over the last four seasons.

Although he had just 46 carries in his rookie season, Dillon already has earned plenty of attention on social media, thanks largely to his enormous quadriceps muscles.

Dillon spoke to the media via Zoom on Wednesday while wearing a sweatshirt that said, “The Quadfather.” Two weeks ago, he posted on TikTok a video that showed him crushing a watermelon with his quads.

“Somebody said if you get to 200,000 followers, you’ve got to break a watermelon,” Dillon said. “I’m a man of my word, so I had to do it, give the people what they wanted. It’s a lot harder than it looks.”

Green Bay’s rushing attack should benefit from the contrasting styles of its two top rushers, with Jones showcasing breakaway ability and Dillon having the strength to punish potential tacklers while picking up first downs.

“They’re a little bit different, I should say a lot different, in their styles,” running backs coach Ben Sirmans said. “But at the end of the day, you look at what they can bring to the table, both of those guys are going to be able to produce.”

Dillon is quick to point out both he and Jones are complete backs, even if they have different strengths.

“You look at us and you see thunder and lightning, which absolutely we are,” Dillon said. “But, you know, the lightning guy, Aaron, he can also grind out some yards. And the thunder guy, myself, I’d like to say I can still beat some guys running away from them.”