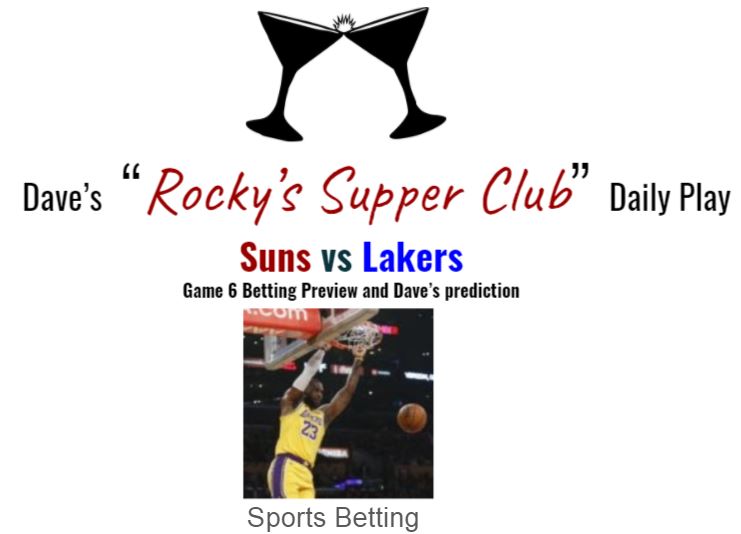 The Phoenix Suns will head on the road to the Staples Center on Thursday night with a chance to close out their first-round series in Game 6 versus the Los Angeles Lakers.

The Lakers are trying to become just the sixth defending NBA Champions in league history to be bounced in the first round of the playoffs in the following season. Los Angeles raced out to a 2-1 series lead but Phoenix has responded with back-to-back wins to put the defending champs on the brink of elimination. The Suns are coming off of a statement win in Game 5 after handing the Lakers a 30-point drubbing on Tuesday.

Playing without Anthony Davis because of a left groin strain, the Lakers were not competitive from the outset of Game 5 as the Suns finished off a 115-85 rout. Phoenix grabbed a double-digit lead just past the midway point of the first quarter, led by 20 midway through the second and held a 30-point lead by halftime, 66-36.

LeBron scored 24 points Tuesday, but the rest of the Lakers starters combined for 11. Kentavious Caldwell-Pope tried to play through a bruised knee that kept him out of Game 5 but left Tuesday’s game early. Dennis Schroder didn’t score a point while missing all nine of his shots from the field.

According to NBA.com, the Lakers sport the second-worst offensive rating in the postseason at just 101.0 through the first five games of the first round. It also ranks 10th in the NBA Playoffs with a -5.1 net rating despite ranking fourth defensively with a 106.2 mark.

Being home for Game 6 will help, but the Lakers were at home in Game 4 and fell 100-92 while shooting 39.5 from the field. Davis played 19 minutes in that one before leaving with his groin injury.

That said, after MUCH internal debate and consideration, I can’t go against LeBron and the Lakers in this spot. Too much is riding on this game, and the history for LeBron in the first round (14-0) in his career is pushing me towards the LAKERS (-2).