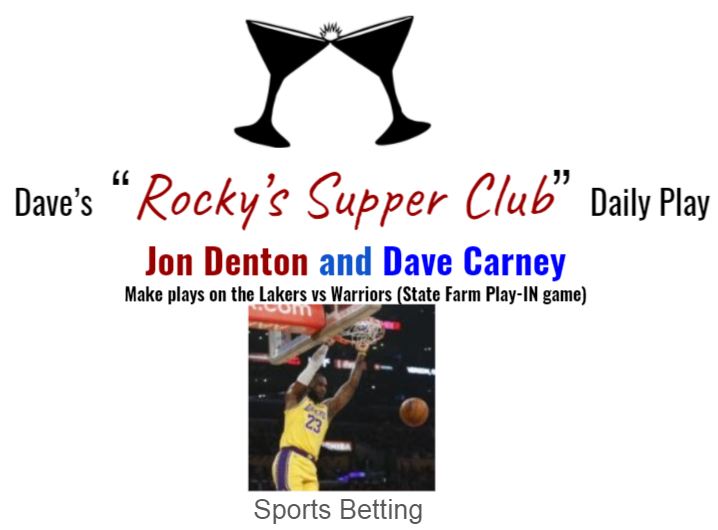 What’s on the table today?: Jon Denton and Dave Carney make plays on the Lakers vs Warriors in the State Farm Play-In Tournament.

Tonight the Golden State Warriors and host Los Angeles Lakers will add a new chapter to their 72-year rivalry when they square off in an NBA play-in game Wednesday night at Staples Center.

The Warriors won a tie-breaker on the court Sunday over the Memphis Grizzlies to place eighth in the Western Conference, while the Lakers lost a season-series tie-breaker to Portland to land seventh, creating the all-California pairing in the West’s first-ever 7-8 play-in matchup.

The winner will advance into the Western Conference playoffs main draw as the No. 7 seed and face the Phoenix Suns in the first round.

The loser also will have a chance to make the playoffs, but would have to win at home on Friday against the winner of Wednesday’s 9-10 duel between the Memphis Grizzlies and San Antonio Spurs in order to move on and meet the top-seeded Utah Jazz.

This morning on-air, Jon Denton (former UNLV superstar QB now our Sports Betting Insider) and I came up with our plays for tonight’s game, taking stabs at Player Prop bets, the Over/Under, and a play ATS (against the spread).

If you missed out on Jon and I on-air this morning going over all these particulars, here are the plays that we’ve made, in no specific order:

Tip-off for tonight’s game on ESPN will be 9pm (CT). Enjoy and good luck!!