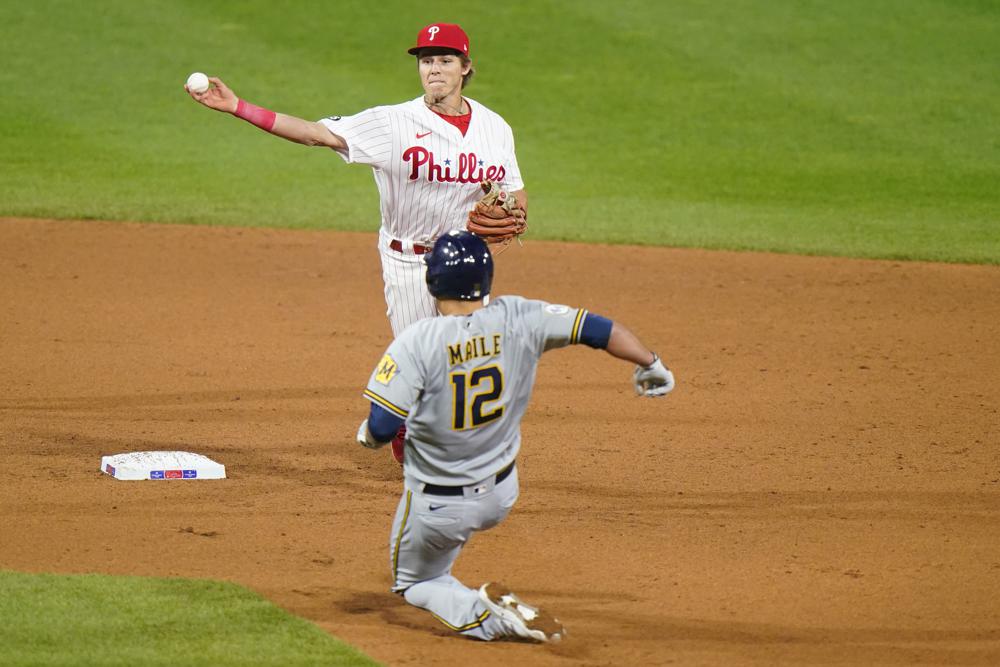 The Phillies won three straight games for the first time since they started the season 4-0.

Enyel De Los Santos — on the lineup card for this one — left two runners stranded to end the eighth. José Alvarado returned from a two-game suspension for triggering a bench-clearing incident and worked a scoreless ninth for his second save.

Rhys Hoskins hit an RBI single in the first, and Peralta allowed five runs over the first five batters.

But the Brewers rallied on another chilly, windy night at Citizens Bank Park. Avisail Garcia hit an RBI single in the third inning that was almost more, but a replay review overturned a safe call at the plate. More than 10,000 fans cheered each time a replay showed Daniel Vogelbach was out on center fielder Odubel Herrera’s throw, and a brief review took the run off the board.

Tyrone Taylor connected for a pinch-hit homer in the fifth against Chase Anderson, and Garcia added a two-run single off Jojo Romero that cut it to 5-4. Taylor has two pinch-hit homers this season and three overall.

Anderson, who was 38-27 with a 3.83 ERA in four seasons with the Brewers from 2016-19, departed after 4 1/3 innings. Matt Moore — the fourth Phillies pitcher — tossed a scoreless seventh in his first appearance since April 17 after going on the COVID-19 injured list.

Phillies manager Joe Girardi took the blame for a lineup mix-up a night earlier when De Los Santos, called up from the minors earlier in the day, came out of the bullpen to pitch the seventh but was denied entry by umpires because he didn’t appear on their lineup card.

Brewers: INF Mark Mathias, who hasn’t played all season after getting hurt in the spring, tweeted he underwent season-ending shoulder surgery. … INF Daniel Robertson (concussion) is close to a return.

Phillies: RF Bryce Harper wasn’t in the lineup for the third straight game because of a sore left wrist. … OF Matt Joyce (right calf strain) was placed on the 10-day IL. OF Roman Quinn also was placed on the 10-day IL with a laceration of the right index finger. OF Mickey Moniak and INF Scott Kingery were recalled from Triple-A Lehigh Valley. … 2B Jean Segura (right quadriceps) singled, was hit by a pitch and scored twice on a rehab assignment for Triple-A Lehigh Valley.

The Phillies send RHP Zack Wheeler (2-2, 3.49 ERA) to the mound against Milwaukee RHP Brandon Woodruff (2-0, 1.80 ERA) on Thursday. Woodruff has allowed only one earned run in 18 career innings against the Phillies.