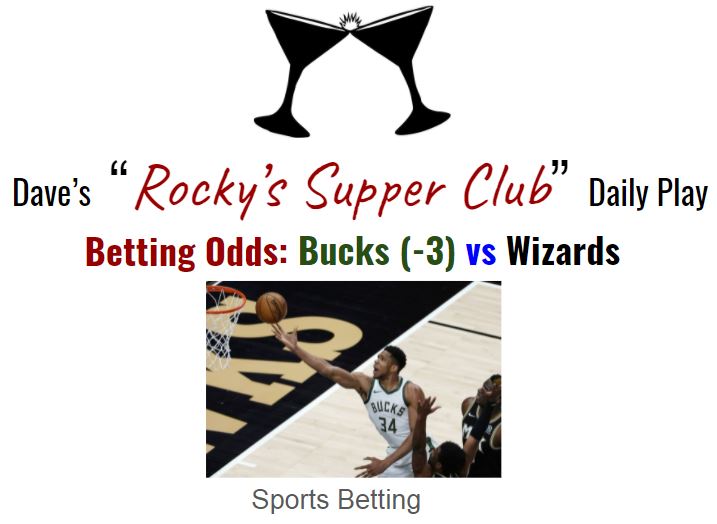 Tonight on WKTY the Bucks are back in action following a very good 124-118 win over the Brooklyn Nets on Tuesday night. Giannis was stellar going for 36 points and 12 rebounds, while getting extremely good contributions from Jrue Holiday (23 points, 10 assists), Khris Middelton (23 points), and Donte Divincenzo with a career high 15 boards.

The opponent for the Bucks tonight? The red-hot Washington Wizards who’ve won 11 of their last 13, and are fresh off a 154-141 win over the Pacers on Monday night. Russell Westbrook has been GOING OFF for the Wizards, in his most recent outing becoming the first player in NBA history to have 2 triple doubles with more that 20 rebounds and 20 assists in a single game. The only other player in the history of the league to have one, Wilt Chamberlain.

Bradley Beal has also been playing some amazing ball for the Wiz this season averaging a whopping 30.9 points per game, currently good for 2nd in the league behind Golden State’s Steph Curry at 31.5. That Washington is currently the 10 seed in the East, and in line for the final “play-in” spot shouldn’t be discounted. This team was crushed by COVID-19 early in the season and had many pundits wondering if they’d even be able to play all the games on their schedule.

Fast forward to tonight’s game, and the Wizards are one of the hottest teams in the NBA, and the kind of opponent that NOBODY wants to see in a one-game situation. The Bucks should be very careful of this squad tonight.

The opening line on this emerged early with the Bucks as a (-7) favorite and the total set at 242. After just a few hours of sharp bets coming in, Vegas has this number down to the Bucks (-3) with the total down a point and a half to 240 ½. What this suggests is: the action is coming in fast and furious on the Wizards to COVER, and the game to go UNDER.

Peeling back the layers you can see why this game is trending that way, over the Wizards last five road games, Washington is 5-0 (ATS). The Wizards are also 9-1 (ATS) in their last 10 games following a straight up win of more than 10 (which they accomplished in that 154-141 win over the Pacers on Monday).

The UNDER was also seeing a lot of early sharp money with Milwaukee going UNDER the total in 6 of their last 7 overall, and UNDER in 6 of their last 7 following a 100+ point performance in the prior game (which the Bucks accomplished last night in the 124-118 win over Brooklyn).

My initial reaction is to take this game UNDER 240 ½, but I’m going to go the other way and say this one goes OVER the total thanks to Washington coming in off a rest day, and the Bucks following up an emotional win over Brooklyn in back-to-back spot. That says to me Washington will be running and gunning, and the Bucks may be playing some shot-for-shot basketball tonight.