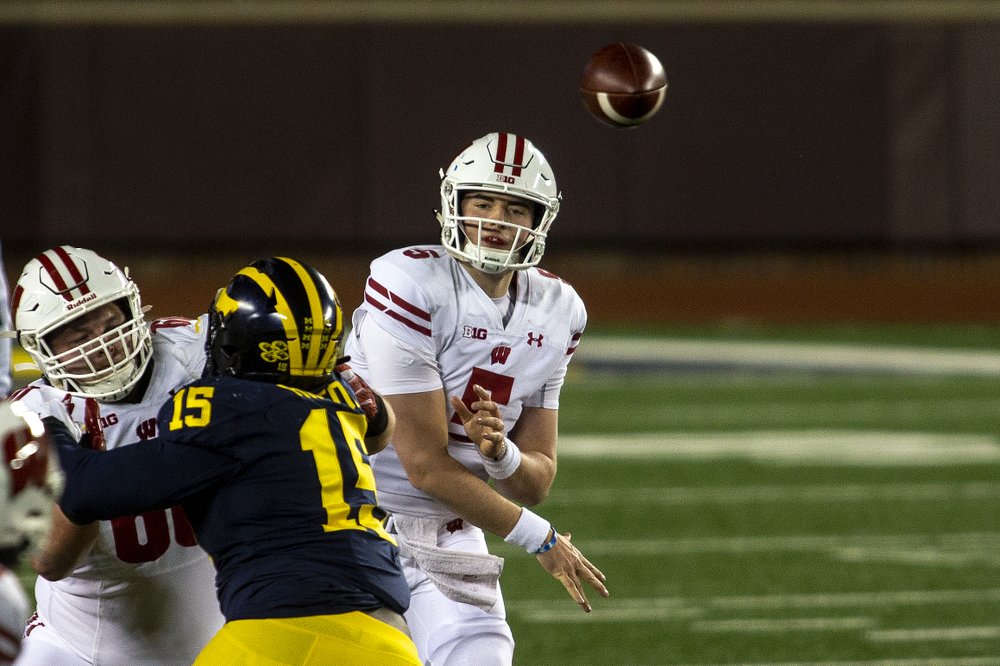 Injuries left Wisconsin without Jalen Berger and other running backs for much of the spring. But the Badgers did have many of their receivers available, a refreshing change from last fall.

Coach Paul Chryst was cautiously optimistic about the passing game.

“It’s a work in progress,” Chryst said Friday before Wisconsin’s final spring practice session. “I’ve liked what they’ve done and I think they have confidence in each other, yet I think part of my job is to, obviously you want them to have confidence, but you also want them to realize there’s a lot still to be done. There’s a lot of work to be done. This has been a really good start to it.”

Mertz opened the pandemic-delayed season last year by going 20 of 21 and throwing five touchdown passes in a 45-7 blowout of Illinois. He set a school single-game record for completion percentage and tied the program mark for touchdown passes, raising hope that the Badgers would have a dynamic aerial attack to accompany their sound running game.

It didn’t quite work out that way.

Mertz tested positive for COVID-19 shortly after that game, played through a shoulder injury later in the season and struggled to lead an offense missing many of its top weapons.

He expects better results this year.

“From where we were last year to where we’re going to be this year, completely different,” Mertz said earlier this spring. “I’ve got complete confidence in that.”

His receivers feel the same way.

“I think this year the ceiling for us is very high,” Kendric Pryor said.

After his brilliant outing against Illinois, Mertz threw five interceptions and four touchdown passes the rest of his redshirt freshman season.

During a three-game skid that included losses to Northwestern, Indiana and Iowa, Mertz was intercepted five times and threw one touchdown pass. Wisconsin scored a total of 20 points during those games.

Mertz, who has spent the offseason trying to improve his footwork, said the shoulder injury was no excuse for his poor play.

“Having a little banged-up shoulder doesn’t justify losing three games and playing like that,” Mertz said. “I’m not going to sit here and make that an excuse, because it’s not.”

Mertz will be leading an offense with much more firepower this season.

Pryor, Danny Davis and Jack Dunn all opted to capitalize on the extra season of eligibility the NCAA gave them due to the pandemic. They’re joined by promising young receivers including Chimere Dike and Devin Chandler.

Pryor and Davis missed the majority of the 2020 season with concussions, frustrated by their inability to help the struggling offense.

“We’ll use that as an edge and as a fire for us,” Davis said. “We want to be better and we will be better. We’ll for sure use that as fuel.”

Wisconsin also returns tight end Jake Ferguson, who had 30 catches for 305 yards and four touchdowns last season to lead the Badgers in all three categories.

Ferguson said earlier this spring that “you can feel the energy’s up” as the Badgers are motivated to bounce back and start contending for Big Ten titles again.

Chryst wants to make sure that attitude lasts beyond the spring.

“Right now, I still want them to be hungry, too,” Chryst said. “I think they have confidence in each other. I do believe that. We’ve got to continue to put the work in. Every area, we can still get better at.”

0
0   0
previous Wisconsin, Utah schedule matchups for 2028, 2033 seasons
next Analysis: After draft, some obstacles ahead for NFL in 2021
Related Posts