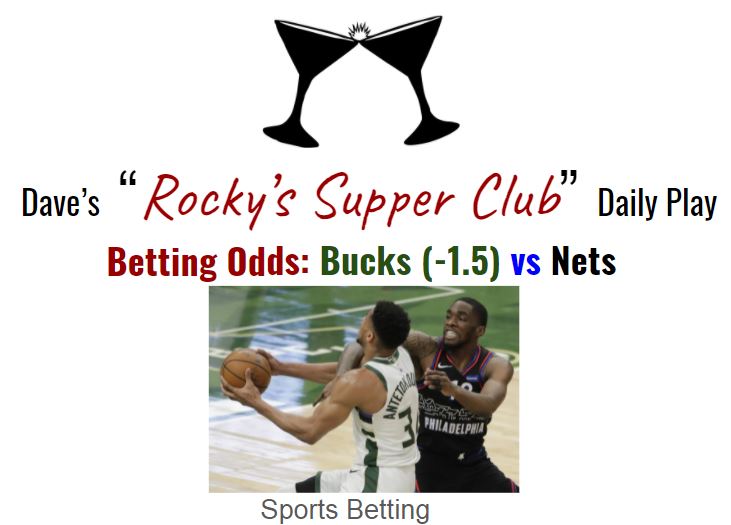 On Sunday the Bucks and Nets played a fantastic, close game, with Giannis going off for a season high 49, out dueling Kevin Durant who also went off, notching 42 points and grabbing 10 boards. The Bucks won that game thanks to a late Durant miss, 117-114.

Tonight on WKTY these two squads are back at it with the Bucks emerging as an early (-1.5) favorite on Fox Bet. The total for tonight’s game has also been set by Fox Bet at 241.5.

The Bucks and Nets excel offensively when they run up and down the floor. Milwaukee is third in the NBA in pace at 102.53 and they lead the NBA with 119.3 points per game. The Nets are not far behind with a pace set at 100.38 while currently sitting second in the NBA with 118.7 points per contest. The number has gone over in nine of Milwaukee’s last 12 home games, and both these teams are shooting the rock exceptionally well.

However, with recent trends and some old-school wisdom I’ve acquired through my 30+ years of NBA consumption, I like this game going UNDER the total of 241.5. Taking a gander at one of my go-to research sites (Covers.com) I can find some really strong evidence over very recent stretches of games that suggest the UNDER is and should be the play.

Consider these trends when deciding if you’re going to make a play on the total:

If you’re still not convinced that I’m on to something here and still don’t want to play the total, but rather take a stab at the Bucks covering tonight’s (-1.5) spread, I may have found some information that will make you (possibly) more confident in going that direction.

The ultimate spot is short favorites -3 or less that see the line move at least a half-point in their favor (these teams are 81-59 ATS (57.9%), however that is NOT where the Bucks are right now. The open was MIL (-2) and has since moved a half point AWAY from the Bucks. The movement is key because it signals some respected money backing away from the home favorite and forcing oddsmakers to adjust the number.

As I stated above, I don’t like tonight’s play ATS, I like the UNDER 241.5. I  figure these two teams will be even more focused on the defensive side of the ball, and both feeling a little tighter with the season winding down and these final games versus each other as good of a “test” as either will have before the postseason. Should be fun, and should tell us a little more how good this Bucks team can be in consecutive games against a team in Brooklyn that looks every bit the title contender they’ve set out to be.