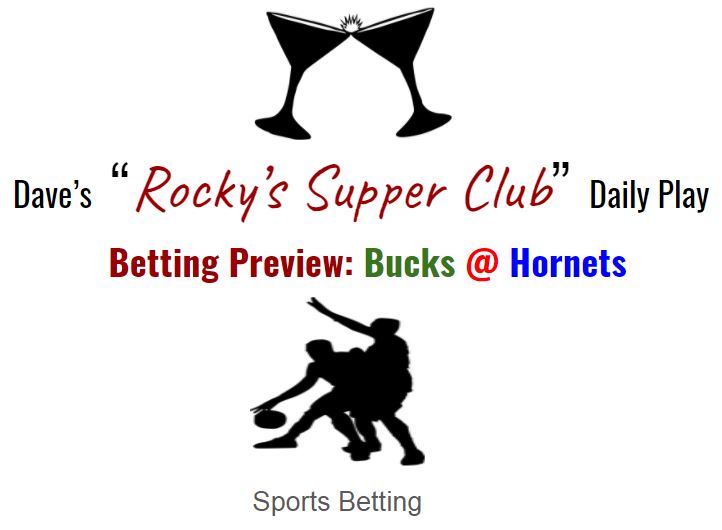 The Milwaukee Bucks are looking to get back on track following a 111-104 loss to the Trae Young-less Atlanta Hawks on Sunday with a visit to Charlotte Hornets tonight on WKTY.

The Bucks most recent loss saw the team give up an 8 point lead in the fourth quarter, largely due to lackluster defense and hot shooting from Lou Williams who sank 4 three’s in a span of just seven minutes that gave the Hawks their ONLY lead of the 2nd half and eventually helped propel Atlanta to the win.

Prior to the loss Sunday to Atlanta the Bucks had been winners of two in a row versus the Philadelphia Seventy-Sixers, however both games were played with the Sixers minus Ben Simmons, and the second game (a 132-94 blowout) didn’t see MVP candidate Joel Embiid suit up either. Those were nice wins versus a team that sits ahead of Milwaukee in the standings, but did little to answer any questions of who is the better team. The Sixers were so depleted the games were simply a wash in that respect.

The Charlotte Hornets are entering tonight’s game winners of their last two contests, including a 125-104 win over the Celtics on Sunday, and a 108-102 win over Cleveland on Friday. The Cavs game should have been a win for the Hornets, but the Celtics, that was a statement game.

Even without LaMelo Ball, the number 3 overall pick of this years’ draft, and someone who looks like a legit star in the making, the Hornets have held their own in the Eastern Conference posting a record of 30-30 entering tonight’s game. That is a testament to how strong the rest of this under-the-radar Hornets team is, with Gordon Hayward having a great bounce back season, and Miles Bridges emerging as a real threat in the open court and from behind the arc.

With both teams trying to sure up their postseason slots (the Bucks currently at 3rd in the conference, the Hornets at 8 and currently a “play-in” team in the NBA Tourney) this game looks like it’s got the makings of a lower scoring affair, with both squads pointing to some recent trends going UNDER in this scenario.

Consider the following from Covers.com:

In recent weeks I’ve been less than impressed with the Bucks ability to close out teams in close games, and I’ve been a little reluctant to bet on the Bucks on the road versus opponents that have something to play for.

That said, I like the trends we’re seeing on the Total play, with the UNDER coming in well for both teams in this situation.  If I were making a play on this game and wanted to NOT bet against the Bucks, take the UNDER 223 ½.  If you’re looking for the best value, take the Hornets +9.