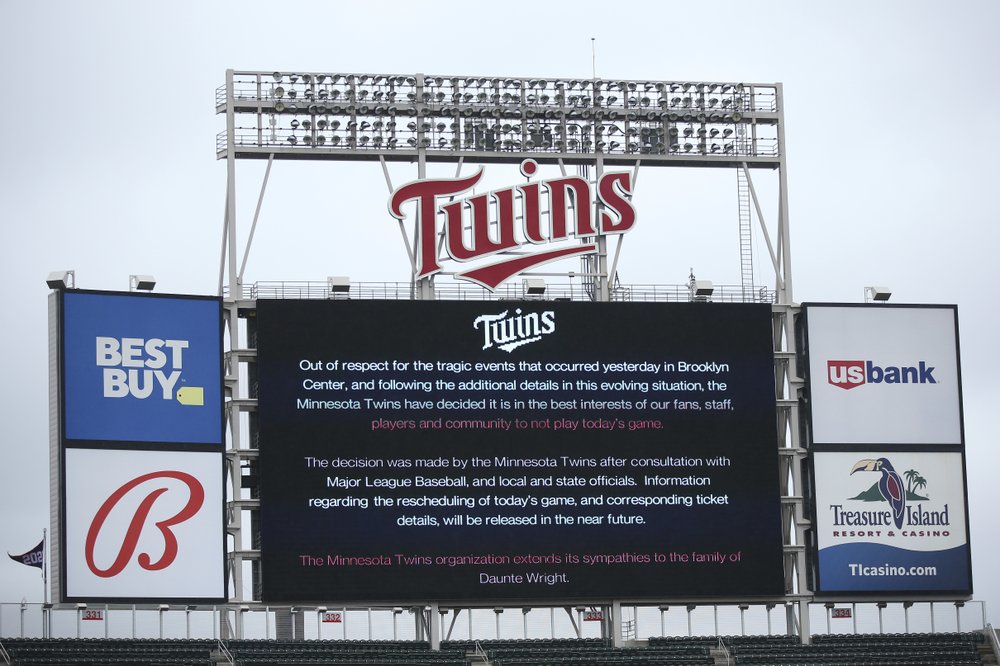 MINNEAPOLIS (AP) — In the raw aftermath of another killing of a Black man by police in Minnesota, there was no place for pro sports in the Twin Cities on Monday.

The Minnesota Twins, Wild and Timberwolves all postponed their games a day after the shooting of 20-year-old Daunte Wright following a traffic stop in a nearby suburb.

Major League Baseball’s Twins were set to begin a four-game series against the Boston Red Sox on Monday afternoon at Target Field.

About an hour before the scheduled first pitch and as players warmed up in light rain, the police chief in Brooklyn Center — a city adjacent to Minneapolis where violent protests took place the night before — announced that the shooting was an “accidental discharge,” with the officer involved firing her handgun instead of a stun gun.

“We came to the conclusion that the right thing to do was for us to not play today, rooted in respect for the Wright family but also rooted in our mind in the safety of all of those involved in today’s game,” Twins president Dave St. Peter said.

The Red Sox were staying at a hotel outside the city due to the timing of their visit during former Officer Derek Chauvin’s murder trial. Most visiting teams stay within a few blocks of the ballpark. The Twins, who consulted with MLB and state and local officials about the postponement, said there had been no discussion of moving the series to another city.

The NBA’s Timberwolves called off their game on Monday night against the Brooklyn Nets, without immediately announcing when it would be rescheduled.

The NHL’s Wild were supposed to host the St. Louis Blues on Monday night. The postponement was made “out of respect for heartbreaking incident” in Brooklyn Center, the team said. That game was rescheduled for May 12, during the extra week the league has added to the regular season to accommodate postponements due to COVID-19 protocols.

“I think we all just figured it was the right thing to do,” Wild general manager Bill Guerin said.

Minnesota Gov. Tim Walz announced a curfew from 7 p.m. Monday until 6 a.m. Tuesday for the three counties that include Brooklyn Center, Minneapolis and the capital of St. Paul, where the Wild play. The rest of the Red Sox-Twins games are scheduled for Tuesday, Wednesday and Thursday afternoons. Without a game clock in baseball, plus wet weather in the forecast for Tuesday, there would be no guarantee the games could finish in time if the curfew were extended to additional nights.

Security around downtown Minneapolis already has been heightened because of the trial of Chauvin, whose knee prosecutors say was pressed on George Floyd’s neck for more than nine minutes as the unarmed Black man was handcuffed and pinned to the pavement on May 25, 2020.

That sparked a summer of sometimes-violent unrest and a national reckoning over racial injustice, felt poignantly and painfully in Minneapolis. Chauvin’s trial at the county government center is about eight blocks from the ballpark, where temporary barricades and fencing were set up as a precaution. Three other officers who were on the scene of Floyd’s death face a separate trial in August.

“Obviously a tough situation, sad situation, especially in this area, right?” Red Sox manager Alex Cora said, extending “thoughts and prayers” to the Wright family. “It’s been tough the last 12 months, with everything that’s going on.”

MLB took a high-profile stance on a race-related issue recently by moving the All-Star Game out of Atlanta due to a new Georgia law restricting voting access.

The Twins last year affixed a black “Justice For George Floyd” banner on the wall at Target Field between left and center field.

New York Yankees outfielder Aaron Hicks, who is Black, asked to be removed from the starting lineup against the Toronto Blue Jays in Dunedin, Florida, on Monday night because of the situation in Minneapolis. Hicks was drafted by and played his first three major league seasons for the Twins.

Whatever the player’s point of view, in whichever sport, the clubhouse conversation will continue.

“Those are never going to end, especially with what we’re dealing with as a community right now, especially with the way that it’s coming into the Twins organization and into our clubhouse directly, and our guys are feeling it,” Twins manager Rocco Baldelli said. “We will never stop talking about it, and we also have some guys that I would put in the category of passionate and were really damaged and hurt by everything that was going on today.”

TOP PHOTO: The scoreboard at Target Field explains the postponement of the baseball game between the Minnesota Twins and Boston Red Sox on Monday, April 12, 2021, in Minneapolis. The Minnesota Twins have postponed their game against the Boston Red Sox because of safety concerns following the fatal police shooting of a Black man in a nearby suburb. (AP Photo/Stacy Bengs)