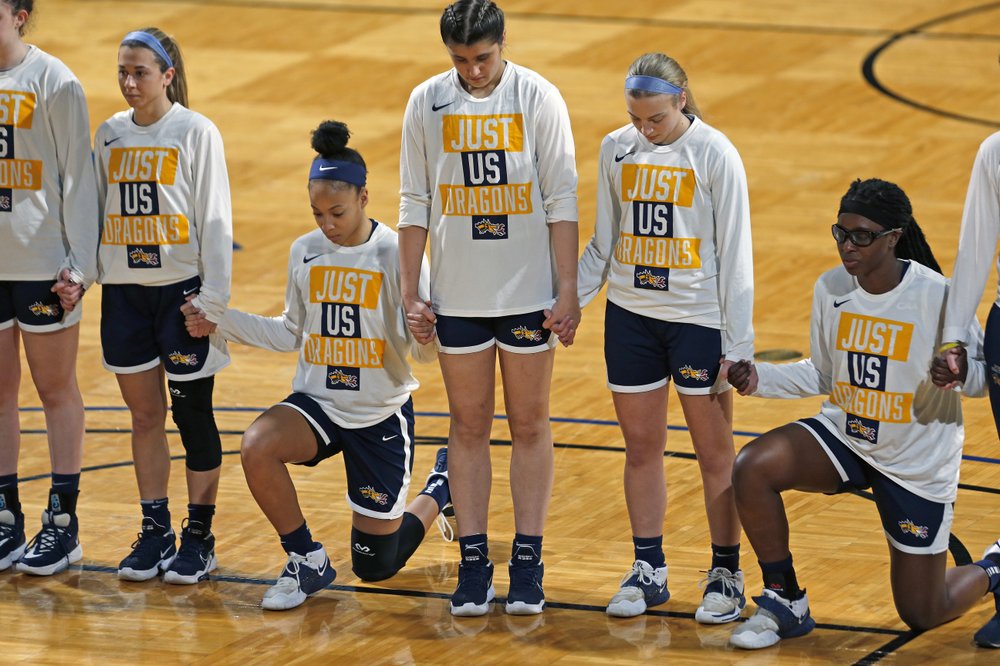 INDIANAPOLIS (AP) — Their protests are not centered on a controversial war in some far off jungle but on issues of racial and social inequity at home. Their pulpit is not a segregated lunch counter, a music festival in upstate New York or Freedom Rides through the South but the seemingly boundless power of social media.

The voices of thousands of college athletes are being heard louder and clearer than they have in years and it is the most politically and socially active generation in a half-century, since the turbulent years of the late 1960s and early ’70s.

From seemingly small issues of inequality in NCAA Tournament weight rooms to life-and-death issues of police brutality and endemic racism, athletes are increasingly calling for change, intent on molding what the future should look like for everyone.

“Some of the things that have occurred this past year, it’s encouraged a lot of us to speak out on things, social justice, and how we feel,” said Loyola Chicago’s Lucas Williamson, who is working on a film project involving the school’s 1963 national title team that broke down racial barriers.

“The things we’ve seen, going back to last summer, it’s been emotional for me,” Williamson said, “and it’s given me the confidence to go out there and speak on some things I feel confident about, and some things that I feel are just causes.”

While the movement gained momentum last summer, when George Floyd and Breonna Taylor died at the hands of police and protests hit America’s streets, the reality is that social unrest has been bubbling out of sight for years.

It took Colin Kaepernick taking a knee to bring it to the surface.

The NFL quarterback’s polarizing stance against social and racial injustice in 2016 was embraced by other pro athletes, and that in turn encouraged college athletes to take a stand. They joined the #MeToo movement against sexual harassment and abuse, and began threatening to strike — to walk off the field of play — unless their demands were heard and met.

Protests by more than two dozen Missouri football players against on-campus racism led to he ouster of the president of the university system and the chancellor of its flagship campus. And despite pushback from legislators that threatened to strip funding for scholarships, they found support from athletes on campuses across the country.

The movement had gone mainstream. The momentum had become unstoppable.

According to Andrew M. Linder, a professor of sociology at Skidmore College, there are two main reasons for this athlete-fueled focus on change: First, younger people in general are more progressive on such issues as race, gender and injustice than previous cohorts at the same age, and second, they have been emboldened by their athletic heroes.

“Many of the current group of college players may have grown up being inspired by not just their on-court play but also their dedication to speaking out,” Linder said. “Consider a college freshman that was about 12 years old when LeBron James wore an ”I Can’t Breathe” T-shirt in solidarity with protests of Eric Garner’s death. Sports heroes’ words and deeds matter.”

James has 49.5 million followers on Twitter. His reach is almost unending. Yet even college athletes whose voices in the past might have been drowned out are being heard.

At the women’s NCAA Tournament in Texas, a video from Oregon’s Sedona Price that exposed the poor workout facilities compared to their counterparts at the men’s tournament forced the NCAA to make an embarrassing apology, and their weight room was upgraded in a matter of days. Men’s players demanded — and got — a meeting with NCAA President Mark Emmert to talk about compensation and equality issues.

“We are in a new generation,” said N’Dea Jones, a standout on the Texas A&M women’s team. “People have been afraid to speak up, especially concerning blackballing or the consequences of speaking up against the NCAA. But from what everybody has been through this year with racial injustices, inequality, and COVID, people have found in themselves that they need to speak up.”

Jones pointed to the WNBA for showing what is possible.

The began by raising awareness of Black Lives Matter years ago with T-shirts and by kneeling, but continued to take greater steps: Players opted out of playing entirely, and many openly campaigned against then-Georgia Sen. Kelly Loeffler — a vocal opponent of the movement who owned the Atlanta Dream — and succeeded in getting her opponent, Raphael Warnock, elected.

“It’s not only the athletes, it’s this generation,” said Minnesota Lynx coach Katie Smith, part of three Olympic gold medal-winning teams and two WNBA champions. “They empower me. It’s amazing they can and are willing to put themselves out there, to institute change and demand what’s right.”

Many of them are doing so at significant risk. A disproportionate number of athletes come from poor economic backgrounds, and their scholarship is the only thing that affords them the opportunity to get an education.

“They don’t have a players’ union behind them, and their scholarships can basically be revoked at any time, and I’m sure those stakes aren’t lost on them,” said Dan Hawkins, a professor of sociology at the University of Nebraska-Omaha.

“I would only add that college athletes, particularly those in the revenue sports, have also started to realize they have real power,” Hawkins said.

There are plenty of college athletes these days that are willing to put in real work on off-court issues like racial, social and economic injustice.

“It has to be stopped. It has to be addressed. You can’t sweep it under the mat,” said Porter Moser, the former Loyola Chicago coach just hired at Oklahoma.. “You hear a lot of people saying, ‘We have mask fatigue.’ Well, we can’t have social justice fatigue. It has to be constant. It has to be every day.”

TOP PHOTO: FILE – Drexel players stand and kneel while the National Anthem is played before the start of the first half of a college basketball game against Georgia in the first round of the women’s NCAA tournament at the Greehey Arena in San Antonio, Texas, Monday, March 22, 2021. (AP Photo/Ronald Cortes)