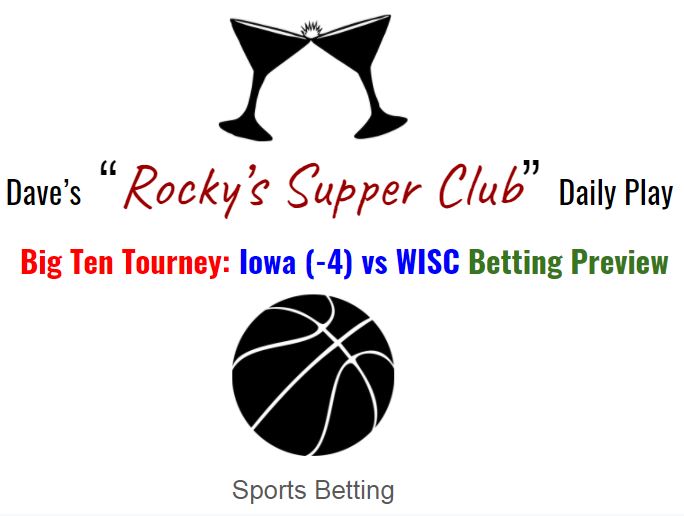 Wow, did the Badgers ever get lucky on Thursday night?! Wisconsin, up by 18 in the second half on a below-five-hundred PSU team, let the Nittany Lions roar all the way back and nearly win the game, falling just short 75-74, landing the Badgers in the 3rd round of the Big Ten Tourney.

This will likely be Wisconsin’s final game in the Tournament however, as the Iowa Hawkeyes, a team that’s already beaten the Badgers twice the season, most recently just last Sunday, has all the indicators pointing towards them as the victor tonight, and a team that should cover the spread of (-4).

In Wisconsin’s last eight games versus ranked teams, the Badgers have lost all eight, with the closest games coming most recently against Iowa and Purdue before them, losing by four in each. Yes the Badgers will be theoretically coming into tonight’s game looking to get “vengeance” from what they think was a game “stolen” from them in Sunday’s loss to the Hawkeyes (the Brad Davidson arm-bar take down that was called a flagrant foul), but that won’t be enough based on what we’ve seen from this Badgers team of late. Wisconsin is simply over-matched most nights.

For Iowa, the real threat lies in whether they look past Wisconsin, or if Weiskamp can’t go and the Hawkeyes “pack it in” to prepare for the Big Dance. I don’t think that will happen, but that is something to take into consideration when deciding to make a play on tonight’s game. Outside of those circumstances, I really don’t see how the Badgers can beat Iowa, Luka Garza, Jordan Bohannon and company given that Wisconsin could barely hang on versus a woeful Penn State team that Wednesday night had to stage an epic comeback just to beat Nebraska. Nebraska for goodness sakes!

Ok, so you’re seeing what I’m seeing too right? These trends show us that playing the Badgers ATS would probably be a BAD idea….but what about Iowa, how do their ATS numbers stack up?

Yep, those trends for Iowa are DEFINITELY more favorable then what we saw from the Badgers, and cements what we were probably thinking already…DO NOT play the Badgers ATS, if you are going to make a play ATS here, look to go IOWA (-4).

Finally, if you are still looking for some action on this game, but you simply can’t bring yourself to bet AGAINST the Badgers, don’t worry, there’s still hope! Looking into the trends we do find some potential value in playing the TOTAL of tonight’s game, with strong indications pointing to taking the UNDER 143.

No matter what you decide, have fun and get ready for the REAL madness of March coming up next!

Bielema has happy return as Illinois pounds Wisconsin, then Badgers fire their coach

Winona State FB Coach Bergstrom: “this week, we get to respond to success”