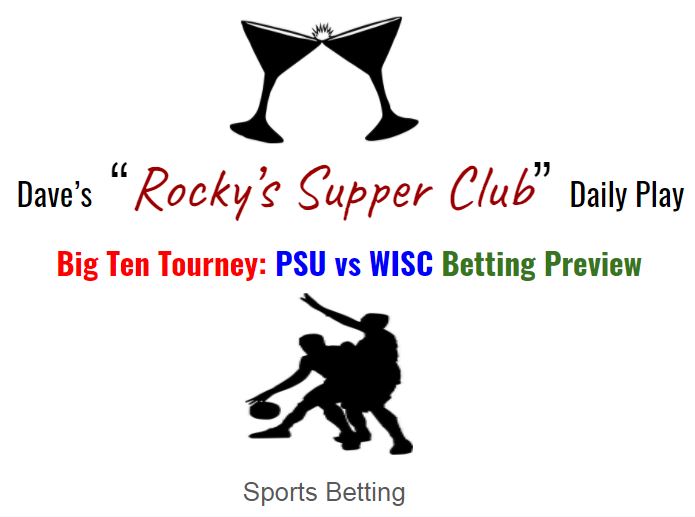 Tonight in the 2nd round of the Big Ten Tournament the Penn State Nittany Lions are looking for what would be considered a major upset over the Wisconsin Badgers who, prior to the most recent AP poll, had been in the Top 25 all season long.

Yesterday I detailed how Penn State, despite their record and struggles this season are actually “better” than their record indicates. Last night versus a fairly hapless Nebraska team however PSU struggled mightily having to stage a second half comeback to Nebraska 72-66. The Nittany Lions also failed to cover the spread of (-6.5) that we also detailed in the column yesterday.

The Badgers are coming in to tonight’s game with three full days of rest since they last lost to Iowa 77-73, and have lost five of their last six heading into tournament play. With the Badgers and Nittany Lions playing twice this season, splitting the contests one a piece, this evening’s game should be fairly close considering how well these teams know each other this season.

In both games, Wisconsin’s leading scorer (Trice) didn’t play up to his expectation, which has  been a problem for this Badger team all season. Consistency has escaped the Badgers and that’s what worries me the most about the spread on tonight’s game, WISC (-5). The number in Vegas opened with Wisconsin (-6) but has since been bet down a full point with sharp money coming in on Penn State to cover the spread. The total which opened at 135 ½ in Vegas books has also seen a sharp amount of money come in on the UNDER, driving the total down to 134.

Another factor that makes a play on tonight’s game ATS a little dicey are the recent trends for both Wisconsin and Penn State, showing that both clubs have some trend advantage based upon recent outings. That of course doesn’t help us at all because it provides no clarity. Take a look at these recent trends from our friends at Covers.com and you’ll see what I see…both of these squads have statistical trends ATS in their favor:

Since we know that both of these teams CAN’T win and cover ATS this puts us in a pickle and essentially has us relying on what our “gut” feeling is ATS. That’s not something that I like to do, and if I were considering a play on this game, it wouldn’t be ATS. Too much is up in the air and recent trends don’t offer any particular clarity or indications.

The play (if you were to make one) for WISC vs PSU seems to be the UNDER of the total 134. Take a look at some of these recent trends, again from Covers.com that show the UNDER play for both teams is coming in with some strong information:

With so much still unknown about this Badgers team, as well as this PSU team, the ATS play seems like one to leave alone. However, the UNDER 134 looks solid, so if you are so inclined, that would be the way I’d go.