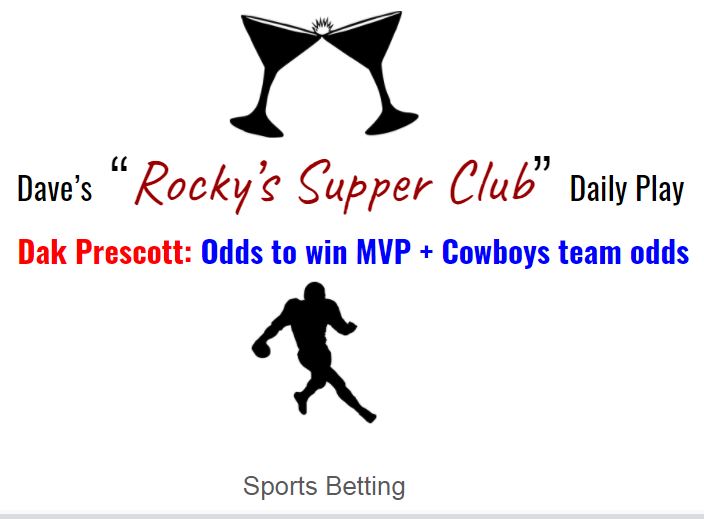 What’s on the table today?: Cowboys odds to win the NFC East & the Super Bowl / PLUS / Dak Prescott’s MVP odds after signing his huge new contract

So, Dak Prescott is now the 2nd highest paid player in the history of the NFL after the Cowboys forked over $160M over 4 years, with a staggering $66M in a signing bonus and a total of $75M given to Dak in year one of his deal.

Full disclosure: I think Dak is a good quarterback, but certainly not GREAT, and in my estimation NOT worth this kind of money at all. There’s a saying in the NFL (for good reason) that you don’t pay GREAT money to GOOD players, and that’s exactly what the Cowboys just did.

In fact, Dallas is now falling into a very dangerous trap that in recent history, hasn’t been easy to overcome. When you pay a QB in excess of 18% of your total cap number, you won’t win a Super Bowl. There has been one rare exception in recent memory, and that was Peyton Manning winning it for the Broncos. Dak Prescott is no Peyton Manning regardless of how banged up Manning was by the time the Broncos beat the Panthers.

If you look back just three years to the 2018 campaign, you’ll note that ALL of the top paid quarterbacks in the league (Aaron Rodgers, Matt Ryan, Matthew Stafford, Kirk Cousins and Jimmy Goroppolo) did have one thing in common. None of them made the playoffs. None.

This year we did see top paid QB’s make the postseason (Rodgers, Brees, Big Ben, Mahomes and Russell Wilson), but who WON the big-game? Oh yea, Tom Brady who continues to NOT take the max so he can help his team with some cap relief so they can attempt to field a championship caliber roster. In the NBA, Tim Duncan did much the same for his whole career, and like Tom Brady, won his final championship in one of his final seasons in the league.

I’m not suggesting that Dak isn’t a quality leader in the locker room, a good guy at home and in public, and a really good quarterback. However, I’m not going to dilute myself into thinking he’s a GREAT quarterback that just NEEDED to be paid the 2nd most money in the NFL. I’m sorry to say but the eye-ball test just doesn’t pass, and neither do the results on the field. Yes Dallas has made a couple of postseason with Dak under center, but was that the Cowboys expectation? Aren’t they supposed to be gunning for Super Bowls?

With my personal thoughts and feelings on this Dak Prescott contract aside, I do want to look at what the oddsmakers are thinking about both the Cowboys chances to win the NFC East, as well as the Super Bowl, and what those oddsmakers think about Dak’s potential (betting wise at least) to be the league’s MVP in 2021.

With uncertainty surrounding Dak, the Cowboys’ Super Bowl odds opened at +3300 on FanDuel Sportsbook as soon as Super Bowl LV ended. Now, Dallas’ odds to win Super Bowl LVI in 2022 have jumped to +2900.

Those odds rank 14th in the NFL, and they are the only team in the NFC East that doesn’t rank bottom-10 in the odds.

William Hill Sportsbook lists Prescott at +1800 to win the 2021 NFL MVP Award, placing Dak in a tie for 8th best with (Chargers 2nd year man) Justin Herbert.  Below are all the players oddsmakers have ahead of Dak in 2021: