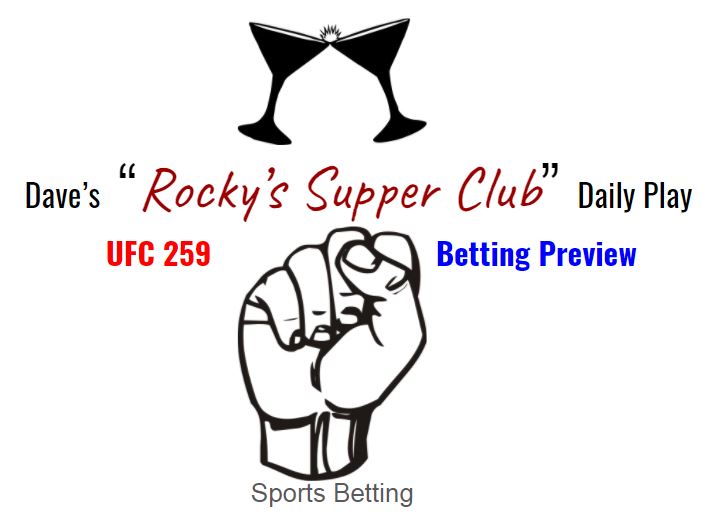 On Saturday in Las Vegas UFC 259 features a main card that has not one, not two, but THREE title fights, one of them (Adesanya vs Blachowicz) could see Isreal Adesanya become one of the very few fighters in UFC history to hold a belt in multiple divisions.

The only fighters to have more than one belt at the same time in the UFC are the who’s who of UFC history; Connor McGregor, Daniel Cormier, BJ Penn, George St-Pierre, and Randy Couture. That’s it, that’s the whole list. If Adesanya does win this Saturday, he’ll be joining a Hall-of-Fame lineup in the annals of UFC history.

Besides the Adesanya vs Blachowicz the other two title fights feature Amanda Nunes vs Megan Anderson, and Aljamain Sterling vs Peter Yan, two fights that may very well steal some thunder from the Main Event. Nunes is by far the BEST female fighter in the UFC today, and while Heidi Fang (this morning on the show) said that Megan Anderson shouldn’t be overlooked, it’s hard to see a fighter like Nunes going down…however, that’s what we thought about Ronda Rousey when she lost to Holly Holmes.

In the Bantamweight division, Aljamain Sterling is looking to take the belt from Peter Yan, a fighter who stylistically could pose some problems for Sterling who’s not known as a striker, instead preferring to win his matches on the matt, using some of the most uncommon submission techniques in the entire UFC.

Since I don’t watch enough UFC to properly gauge how I would bet these fights I’ll have to go with Heidi Fang once again and say that her predictions of (Sterling, Nunes and Adesanya) are solid and worthy of taking. The problem (if any) with taking Nunes is simply the cost, she’s a -1100 favorite. That means you’d have to lay down $1100 to win $100. I guess if you’re a WHALE (like Flyod Mayweahter) you can drop $110K to win $10K, but really, who’s doing that?!

Enjoy the weekend, enjoy the fights, and thanks to VSIN.com for the latest odds: