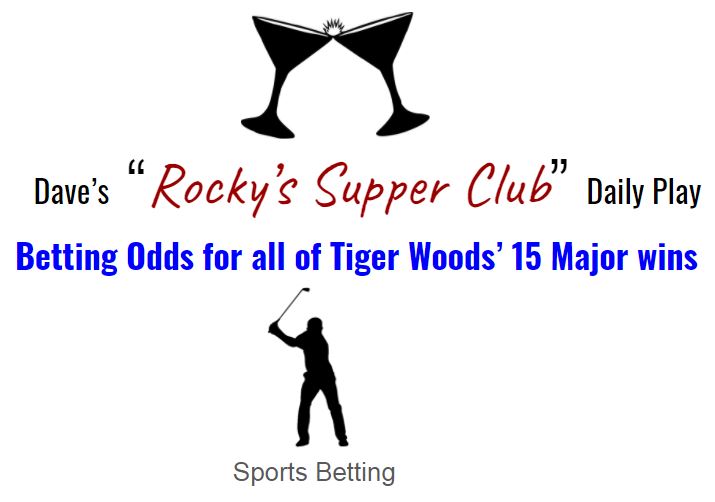 What’s on the table today?: A historical look back at the betting odds for all of Tiger Woods’ 15 Major Championship wins.

When Tiger Woods was pried by the “jaws of life” out of a single car crash Tuesday morning in Los Angeles, the entire world, not just the sports world, stopped everything to follow the developing story. Would Tiger live? How bad were his injuries? Would he ever golf again?

Those questions came in almost as fast and furious as one of Woods’ iconic swings. It was all-powerful, all-consuming, and all we could think of in the moment. It showed that no matter how long it’s been since his reign at the top of the golf world, Tiger Woods, for better or worse, is still the most galvanizing figure in golf, and still one of the most well known sports figures world-wide.

Once we collectively found out that yes, Tiger would live, our minds immediately transitioned back to golf, and where Tiger’s place in golf history lies. On this morning’s program I asked that very question and a majority of respondents agreed with me; Tiger is the greatest golfer to ever play the game. Yes, there are some who still look to the Jack “The Golden Bear” Nicholas, or Arnold Palmer (the golfer not the drink). Those two gentlemen, yes, are in the conversation, but honestly, they couldn’t hold a candle to Tiger Woods in his prime. It’s really not even much of a debate.

Jack Nicholas holds the all-time Major Championship record with 18, Tiger a close 2nd with 15, and most likely that’ll be all for Woods. However, the reign of dominance that Woods enjoyed is not comparable in golf’s past, and will never been seen (at least I don’t think it will) in golf’s future. Woods was a trailblazer, trendsetter, and dominator of the sport the likes of which had never been witnessed. Tiger also brought about a new era of golf fandom that likewise will never be matched. To me, he’s hands down the greatest golfer of all time.

Today, thanks to some great research by my friends at the Action Network I’ve got the betting odds for each of Tiger’s 15 Major Championship wins from his first back in 1997 to his most recent (Masters) in 2019. Enjoy these sports heroes while you can and while they’re at it, like we almost found out yesterday these people can be taken from us at any time.