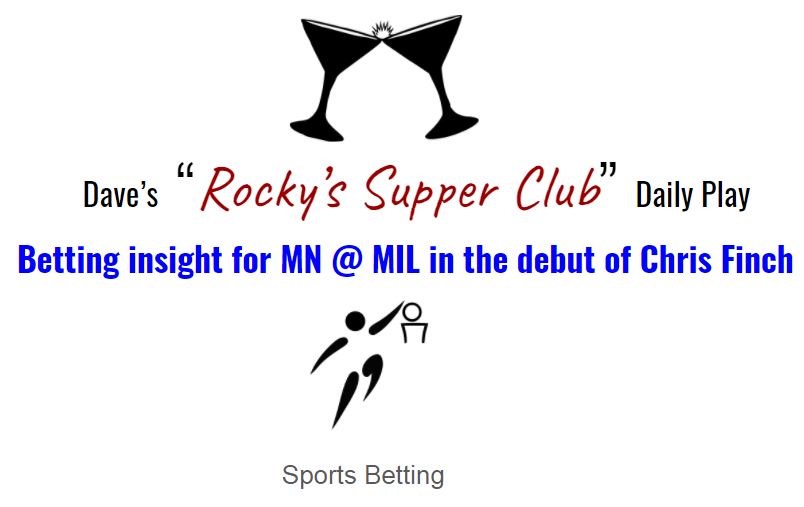 What’s on the table today?: Betting preview: Timberwolves at Bucks (in the debut of Timberwolves new head coach Chris Finch)

The Milwaukee Bucks are currently sitting at 18-13 (winners of 2 straight) for 3rd place in the Eastern Conference. Milwaukee has been one of the NBA’s top offenses at 119.2 points per game to rank second in the league on 55.1 percent shooting from two and 39.3 percent shooting from three, both top five marks. The Bucks defense has been closer to mid-pack at 112.1 points per game allowed on opponent shooting splits of 50.5 percent from two and 38.3 percent from beyond the arc.

Gainnis’s numbers are roughly in line with his two MVP campaigns at 28.4 points, 11.9 rebounds and 5.9 assists per game to lead the Bucks in all three categories. Middleton is averaging 20.5 points and 5.7 assists per game while shooting 43.1 percent from three-point range.

Jrue Holiday continues be out after contracting COVID-19, but indications are that he could be back as soon as Thursday when the Bucks take on the New Orleans Pelicans in a national TV game on TNT. Without Holiday the Bucks are having a hard time finding footing going 3-5 in his absence, showcasing just how important he his to the Bucks chances of winning this season.

The Timberwolves enter tonight’s game with a lot of question marks, including how their new head coach Chris Finch, who takes over for fired Ryan Saunders, will fare in his debut. Will the T-wolves come out gunning for the new leader, or will the play a sloppy and haphazard game because they really don’t know what Chris Finch is going to want from them?

Those questions, along with the Timberwolves lack of success this year (7-24 / last place in the Western Conference) are more than enough to take a strong look at the Bucks -10.5 in tonight’s game. As a matter of fact, when you take a look at some recent ATS trends from Covers.com you’ll see more indications that MIL -10.5 is a strong play this evening.

Bucks are 6-1 ATS in their last 7 games following a straight up win of more than 10 points.

Bucks are 5-1 ATS in their last 6 games following a ATS win.

Bucks are 5-1 ATS in their last 6 games following a straight up win.

Minnesota however shouldn’t be counted out of tonight’s game to at least cover the spread. Without the benefit of knowing exactly how Chris Finch (new head coach) will devise a game plan against the Bucks tonight just might give the lowly T-wolves the opportunity to cover this number (-10.5) or potentially grab an upset win.
That said, a quick look at the T-wolves recent performance ATS from Covers.com and you won’t find a ton to hang your hat on if you were thinking about making a play for Minnesota ATS.

0-4 ATS in its last four games as an underdog.

2-5 ATS in its last seven games following an ATS loss.

It’s going to be interesting to see how all of this plays out on the court tonight, but with the Bucks hungry to re-establish themselves as a Top-Tier team in the NBA, with the Wolves clearly in flux, I can understand why most predictions from “sharp” bettors this morning have the Bucks covering the -10.5.