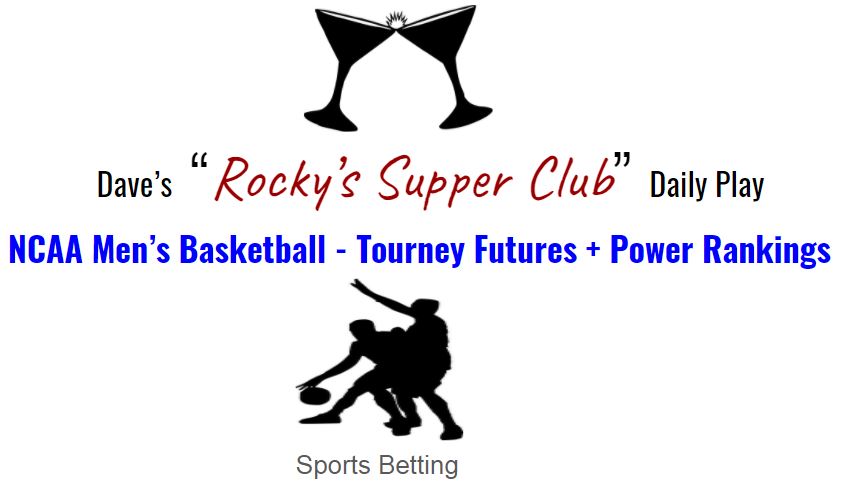 What’s on the table today?: NCAA futures (as of 2/22/2021) for the Top 15 teams according to sports books in Vegas and offshore, as well as what the newest Power Rankings show for those teams after another wild weekend of college hoops.

Please note (Power Rankings from OddsShark combine a ton of statistical info, strength of schedule, opponents, and more. If the Power Rankings don’t look like the ODDS to win, don’t be surprised…they’re NOT)!

Are you noticing something missing from these odds or the Power Rankings? If you noticed there’s none of the traditional powerhouses like Duke, North Carolina, Kentucky, or Kansas, you win!!!

The “blue-chip” teams of tradition are having a really tough go of it this year with Duke having star freshman (from Wisconsin) Jalen Johnson opting out after 16 games, Kentucky actually asking a top tier recruit (a freshman as well) to go home and figure things out, and Roy Williams North Carolina Tar-heels team has been so bad nobody’s even paid attention to them.

With Wisconsin opening up the season as the Pre-Seaon #4 team, lots of us in Wisconsin hoped for more from this years’ Badger team with seven seniors on it than we’re seeing now. However, with the Badgers being given the 14th best shot to win the whole Tourney according to odds-makers, perhaps Wisconsin has been playing with an eye towards the NCAA’s and not as much as the Big TEN season. I personally don’t think so, but if you’re a Badgers fan perhaps that makes you feel a little better?

Normally we’d be looking forward to the NCAA Men’s Tourney with the excitement of upsets on the horizon, storied programs looking to add more hardware, and a host of future NBA players looking to show off in front of schools and scouts. This year, I have NO IDEA what we’re going to see, which makes an earlier than later bet on NCAA Tourney futures something you should really consider, especially if you have a strong feeling on a team that’s not in the Top 3-5. Tons of value is out there for teams in that second tier, and the Badgers are among them at +2200.