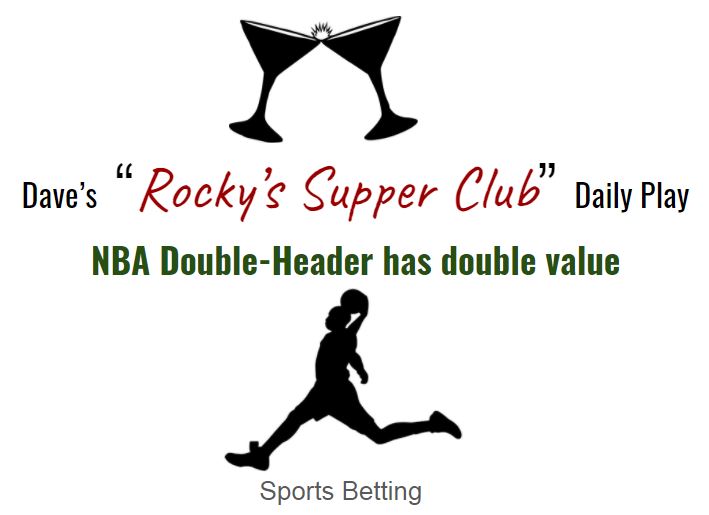 What’s on the table today?: Today I’m serving up a couple of tasty NBA plays that look great for bettors, at least according to the numbers, withe T-wolves (+6.5) hosting the Lakers (-6.5) and player props for the Brooklyn Nets in Phoenix taking on the (literally) red-hot Suns.

Starting off with the Lakers at T-wolves we must consider that Anthony Davis isn’t going to be in the Lakers lineup for at least 2-3 weeks. This of course is a HUGE miss for L.A., but in the five games this season when Davis hasn’t played, the Lakers are still 4-1. That aside, all the other numbers having to do with the BETTING elements when the line opened at MN +7.5 suggested that the Timberwolves were actually the play ATS and on the Moneyline (MN +215). The OVER play on the total (223) is also something to look at with the T-wolves going OVER at home in 3 of four games when they’ve been a dog of more than 6.5 and less than 12.

However, once the line moved down from it’s open (LA -7.5) to the Lakers (-6.5) I do have doubts that Minnesota will be able to cover considering these trends from Covers.com:

Finally, when finishing your consideration of betting on this game, consider that the Lakers, who’ve recently just ended their 7 game winning streak thanks to the Denver Nuggets, are only allowing 106 points per game. The Timberwolves on the other hand are surrendering a whopping 115.7 and are playing with one of the youngest teams in the NBA. Do you think that on national TV (tonight’s game will be broadcast on TNT) Lebron James and the Lakers, fresh off a loss and the news that Anthony Davis will be out until the All-Star break, will want to lay an egg against an upstart Minnesota team? If you’re willing to say YES, then by all means take the T-wolves +6.5, but I wouldn’t touch that with a stick!!!

If you’re going to make a play on tonight’s Lakers at Wolves game, my bet would be to take the OVER (223).

Next up on the menu, a player prop bet for tonight’s 2nd part of the TNT double-header with the Brooklyn Nets on the road taking on the Phoenix Suns.

The Nets are coming off a win Monday in Sacramento versus the Kings 136-125, a game in which they covered the -10 spread even without Kevin Durant. In case this is a news flash, the Kings are terrible and the Nets just may be starting to figure things out.

Phoenix is also coming in off a win 109-90 versus Orlando on Sunday, and has been playing some of the best basketball in the league beating the Sixers, Bucks and Celtics during their current six game win streak. Phoenix has a record of 17-9 and is currently the number four team in the Western Conference.

The spread for tonight’s game has the Suns favored by (-5.5) which is a huge shift since opening this morning at (-3). But I don’t want to bet on the game itself tonight, I want to take a stab at a player prop bet, specifically a Deandre Ayton prop bet.

Ayton is averaging a modest 13.8 points per game this season, but has become a really good shooter and a double-double machine going for 12.3 boards per this season. During the recent six game winning streak for the Suns Ayton has scored over 16 points only twice, versus Boston and versus the Bucks. Two of last year’s best defensive teams in the East. Tonight’s matchup (Deandre Jordan) and the Nets is primed for Ayton to have another big scoring night, which leads us to tonight’s prop bet: Ayton OVER 15.5 points at (-118). https://www.sportsbettingdime.com/news/nba/nets-suns-props-best-bets-february-16th/

In the Nets win Monday night in Sacramento, starting power forward/center Marvin Bagley scored 19 on Brooklyn in 21 minutes. Hassan Whiteside came off the bench for the Kings and in 24 minutes wrecked the Nets for 26 points and 16 rebounds. Let that process, between Bagley and Whiteside the Nets gave up 45 points in 45 minutes to the big-men. Do you really think they can hold ANYBODY, let alone a really decent post and perimeter player like Ayton to anything less than 16 points?? I don’t. Take this prop!

Russell was a champion of activism before winning NBA titles

Appreciation: Bill Russell lived a life like very few others