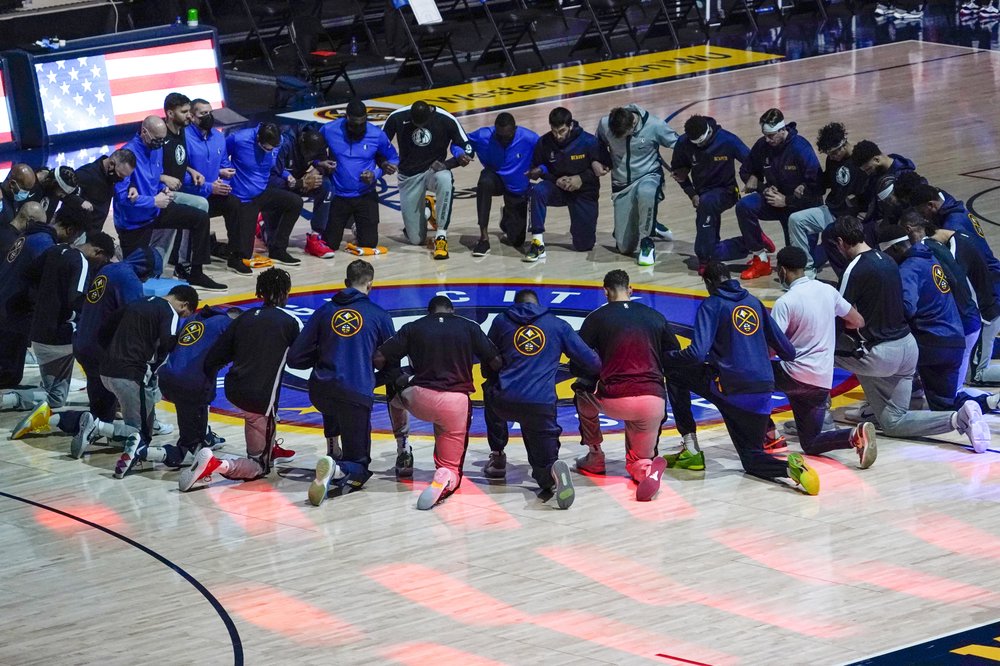 DALLAS (AP) — Dallas Mavericks owner Mark Cuban relented Wednesday and the national anthem will be played before home games this season after the NBA reiterated its “longstanding league policy” to include the song.

The league’s initial reaction to Cuban’s decision was to say teams were free to conduct pregame activities as they wished with the unusual circumstances created by the coronavirus pandemic. Most teams don’t have fans at home games.

But the NBA abruptly reversed course with Cuban’s decision reverberating around the country, including a question put to White House press secretary Jen Psaki during her daily briefing. Athlete protests of social and racial injustice during the “The Star-Spangled Banner” became a flashpoint between then-President Donald Trump and various leagues during his administration.

“With NBA teams now in the process of welcoming fans back into their arenas, all teams will play the national anthem in keeping with longstanding league policy,” the league said.

The Mavericks played a prerecorded anthem with both teams standing along the free throw lines, as spelled out in NBA guidelines, before Wednesday night’s 118-117 win over Atlanta. In the past, Cuban always had live performances of the anthem, although that practice has changed across all sports because of the pandemic.

Less than half of the roughly 1,500 vaccinated essential workers were at their seats during the anthem. All players and coaches stood, including Dallas coach Rick Carlisle with his right hand over his heart.

“It’s an animated discussion, which is certainly not surprising,” Carlisle said before the game. “This was Mark’s decision. He was steadfast about it. It’s been quite a day.”

The Mavericks released a statement from Cuban while acknowledging the club would return to playing the anthem.

“We respect and always have respected the passion people have for the anthem and our country,” Cuban said. “But we also loudly hear the voices of those who feel that the anthem does not represent them. We feel that their voices need to be respected and heard, because they have not been.

“Our hope is that going forward people will take the same passion they have for this issue and apply the same amount of energy to listen to those who feel differently from them,” he said. “Then we can move forward and have courageous conversations that move this country forward and find what unites us.”

The Mavericks played their first 10 regular-season games without fans before allowing the essential workers in for free for the first time Monday against Minnesota.

Rich Patterson, a 29-year-old who works in health care and attended the Atlanta game with a colleague, said the anthem was important to him, but that he wasn’t hung up on whether it was played before sporting events.

“This is a sporting event and I’m here to have fun,” Patterson said from seats a few rows from the front of a platform about a dozen feet above the playing area. “I’m not here to worry about politics on either side.”

Cuban at that point declined to elaborate on his decision to not play the anthem, other than to say nobody noticed until after 11 regular-season home games.

The move wasn’t without support among NBA coaches.

“This should happen everywhere,” New Orleans coach Stan Van Gundy tweeted Wednesday. “If you think the anthem needs to be played before sporting events, then play it before every movie, concert, church service and the start of every work day at every business. What good reason is there to play the anthem before a game?”

The question Van Gundy raises has been debated for some time.

The NBA rule book does not specifically say that the anthem — or anthems, in games involving the Toronto Raptors, the lone Canadian team in the league — must be played before games. The only rule regarding the songs states this: “Players, coaches and trainers must stand and line up in a dignified posture along the foul lines during the playing of the American and/or Canadian national anthems.”

That rule was relaxed last year in the NBA’s restart bubble at Walt Disney World, when the league took no objection to players kneeling for the anthem to show their desire for an end to racial injustice and police brutality.

Players were criticized for kneeling; some of those who stood, such as Miami’s Meyers Leonard and Orlando’s Jonathan Isaac, also faced backlash on social media for choosing to stand. San Antonio coach Gregg Popovich, a graduate of the Air Force Academy and coach of the U.S. men’s national team, also stood for anthems in the bubble.

In an interview with ESPN, Cuban said it was never his intent to quit playing the anthem for good. The outspoken billionaire said the issue was part of an ongoing conversation with people in the community and the league, particularly as fans begin returning to arenas.

Dallas players Jalen Brunson and Willie Cauley-Stein said they felt Cuban was showing support for them, and they appreciated it.

“One thing I’ll say about Mark is he’s not scared of what’s being talked about,” Cauley-Stein said. “It’s not just a business to him. When you get to this level, it’s such a business. And when you’ve got a guy that shows his full character and he’s not being a businessman and he’s like human, that’s big-time for a player to go through.”

Backlash to not playing the anthem was swift in the Texas Capitol, where Republican Lt. Gov. Dan Patrick urged Cuban to “sell the franchise & some Texas Patriots will buy it.” Other GOP lawmakers suggested the tax breaks the American Airlines Center receives should come under new scrutiny.

Patrick said he intends to introduce a bill in the Texas Senate that will ensure the national anthem is played at all events that receive public funding. He said the bill has broad support.

“It is hard to believe this could happen in Texas, but Mark Cuban’s actions of yesterday made it clear that we must specify that in Texas we play the national anthem before all major events,” Patrick said. “In this time when so many things divide us, sports are one thing that bring us together — right, left, Black, white and brown.”

TOP PHOTO: FILE – Members of the Denver Nuggets and the Dallas Mavericks lock arms and take a knee during the national anthem before an NBA basketball game in Denver, in this Thursday, Jan. 7, 2021, file photo. The NBA said Wednesday, Feb. 10, 2021, the national anthem will be played in arenas “in keeping with longstanding league policy” after Dallas Mavericks owner Mark Cuban revealed he had decided not to play it before his team’s home games this season. (AP Photo/Jack Dempsey, File)