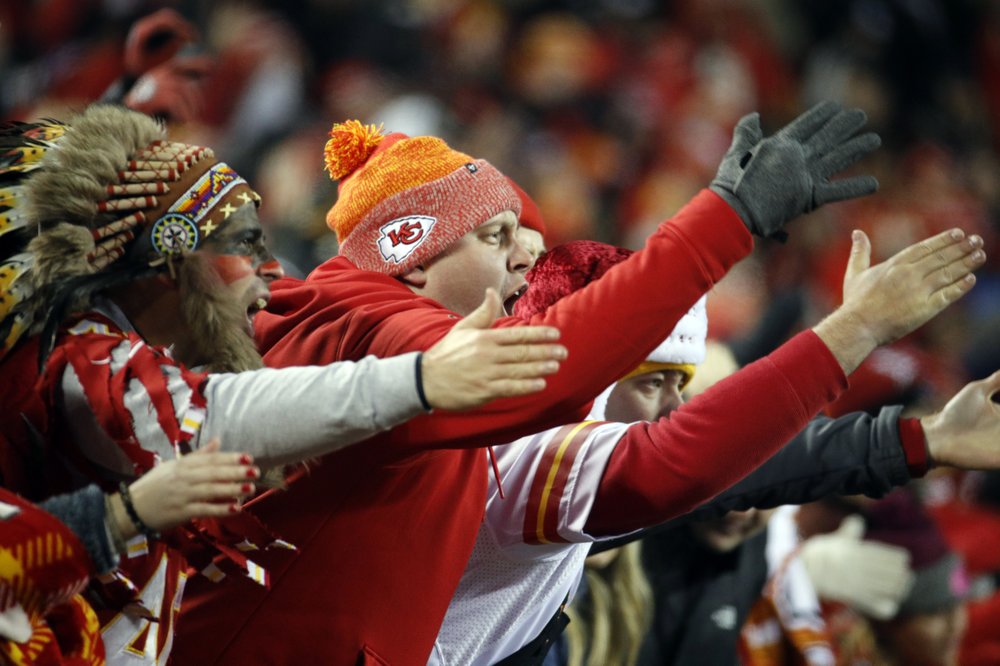 Chiefs under pressure to ditch the tomahawk chop celebration

Chiefs under pressure to ditch the tomahawk chop celebration

Pressure is mounting for the Super Bowl-bound Kansas City Chiefs to abandon a popular tradition in which fans break into a “war chant” while making a chopping hand motion designed to mimic the Native American tomahawk.

Local groups have long argued that the team’s chop tradition and even its name itself are derogatory to American Indians, yet the national attention focused for years on the Washington football team’s use of the name Redskins and the cartoonish Chief Wahoo logo, long the emblem for the Cleveland Indians baseball team. But in the past year, those teams have decided to ditch their Native American-themed monikers, and the defending champion Chiefs are generating more attention due to a second consecutive appearance on the sport’s biggest stage.

A coalition of Native American groups has put up billboards in the Kansas City area to protest the tomahawk chop and Chiefs’ name. A protest is planned outside Raymond James Stadium in Tampa, site of Sunday’s game against the Tampa Bay Buccaneers, and the coalition has hired a plane to fly around the area. A few thousand people have signed onto two online petitions, one of them started by a fourth-grader.

The Chiefs made some changes in the fall, barring headdresses and war paint and making a subtle alteration to the chop, with cheerleaders using a closed first instead of an open palm to signal the beating of a drum.

But Gaylene Crouser, executive director of the Kansas City Indian Center, found the tweak to be laughable.

“They think that that somehow helps, and they are still playing that ridiculous Hollywood Indian song, which is such a stereotypical Indian song from like old Cowboy movies or something. I don’t know how they feel that that made any difference at all,” she said. “And its not like their fans are doing it any different either.”

But the changes aren’t nearly enough for the St. Petersburg-based Florida Indigenous Rights and Environmental Equality, which plans to protest near the stadium Sunday ahead of the kickoff, singing and holding signs.

“Now the team wants to backtrack and say we are being culturally appropriate and we are being respectful of indigenous people by saying no headdresses,” she said. “And that is a good start, but the fans are still operating as if it is an indigenous-type atmosphere because you are still called the Chiefs. And you can still do this movement that looks like a tomahawk chop, but we are going to call it a drum beat instead. It is kind of silly. Just change it.”

Fans of the Chiefs long ago adopted the chanting and arm movement symbolizing the brandishing of a tomahawk that began at Florida State University in the 1980s.

“When we are down it is a rally cry,” said Kile Chaney, a 42-year-old stone mason from Harrisonville, Missouri. “Just to hear all the fans doing the tomahawk chop and hear it echo through the corridors, it is a beautiful noise that we make here.”

Aaron Bien, a 61-year-old automotive repair and body shop owner from Hillsdale, Kansas, described it as no different than any cheer.

“It is the soul. It is the lifeblood,” said Bien, who had been a Chiefs season ticket holder for 15 years before the pandemic limited seating capacity in the stadium this season.

He said the chop has “nothing to do with Native Americans,” noting that the origin of the Chiefs nickname may have more to do with the mayor who helped lure the franchise from Dallas in 1963.

Mayor H. Roe Bartle was a large man known as “The Chief” for his many years of leadership in the Boy Scouts. Team owner Lamar Hunt reportedly named the team the Chiefs in honor of Bartle.

Vincent Schilling, associate editor of Indian Country Today, said that doesn’t make it any better. He noted that, though Bartle was white, he started a Scouting society called the “Mic-O-Say Tribe,” which remains active and continues to use Native American attire and language. Young participants are “braves,” and the top leader is the “chief.”

“He was called Chief because he played Indian and falsely taught Boy Scouts how to dress up as Native Americans,” said Schilling, a member of the St. Regis Mohawk Tribe. “Everyone dressed up like Indians going to those games, perpetuating a horrible cultural stereotype for decades.”

He called the changes the team has made to the chop “insulting” and “a preposterous gesture with a lack of cultural responsibility.”

TOP PHOTO: FILE – In this Dec. 13, 2018, photo, Kansas City Chiefs fans chant and do the chop during the second half of the team’s NFL football game against the Los Angeles Chargers in Kansas City, Mo. The Kansas City Chiefs have since barred headdresses and war paint amid the nationwide push for racial justice, but its effort to make its popular “war chant” more palatable is getting a fresh round of scrutiny from Native American groups as the team prepares to make its second straight Super Bowl appearance. (AP Photo/Charlie Riedel, File)