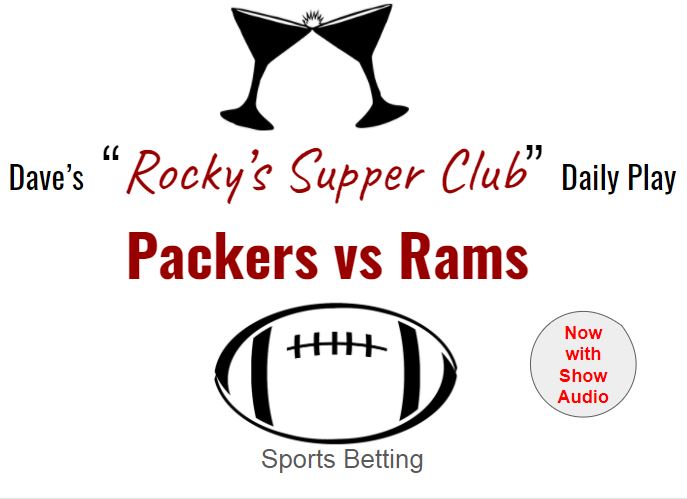 How did I get here?: Still holding since Wednesday’s Two-Team-NFL-Teaser (CLE +16) & (TB +9). Yesterday in the Jon Denton Special he outlined a fantastic Three-Team-NFL-Teaser that if you didn’t see, you MUST go back and take a look at the article, get the play, and make it if you can.

The Jon Denton Special on Thursday was so good actually, friends of mine in Vegas have already reached out and said they’re playing it. Seriously, go back and look at that play, and make it!

What’s on the table today?: This just seems too easy. I’m taking the Green Bay Packers to cover the (-6.5) spread versus the Los Angeles Rams on Saturday, and I feel fantastic about it. No need for me to TEASE this game, the Packers could very well torpedo the Rams and win by multiple touchdowns.

I realize that the Rams are the top rated defense in the NFL, and believe me I’ve been pondering just how much stock I was going to put into that defense this Saturday at Lambeau, and the answer turned out to be, “not much”.

The Green Bay Packers are the number one scoring offense in the NFL this season, Aaron Rodgers is definitely going to win his third NFL MVP, and the Packers defense, which isn’t going to get confused with the Rams, has only given up more than 16 points once in their last five games signaling that Green Bay’s defense has gotten better as the season has worn on.

That’s not good news for the Rams who will be reluctantly playing Jared Goff at quarterback after last weeks’ starter in Seattle John Wolford was ruled out with the neck injury he sustained last week. Had Wolford been able to go, Sean McVay would have started him and reports from several outlets in Los Angeles and around NFL circles suggest the Rams could actually be looking to move OFF of Jared Goff if they can. This is a dude they just paid over $100M bucks too..

Now, those are the reasons that I think the Packers will WIN the game, which I do think they will. What about covering the spread though? Are there numbers that support my prediction that not only will the Packers beat the Rams, but cover the (-6.5) spread and let me truly enjoy my weekend? The answer to that is, yes, yes there is, and here they are:

I fully understand that all games present risks, especially when making a play ATS, and I understand upsets happen. However, this just seems like such a perfect spot for Aaron Rodgers and the Packers. Who knows how many more runs like these the Packers have with Rodgers? I just can’t see them letting this opportunity pass them by and that’s why……Packers (-6.5) all day baby!