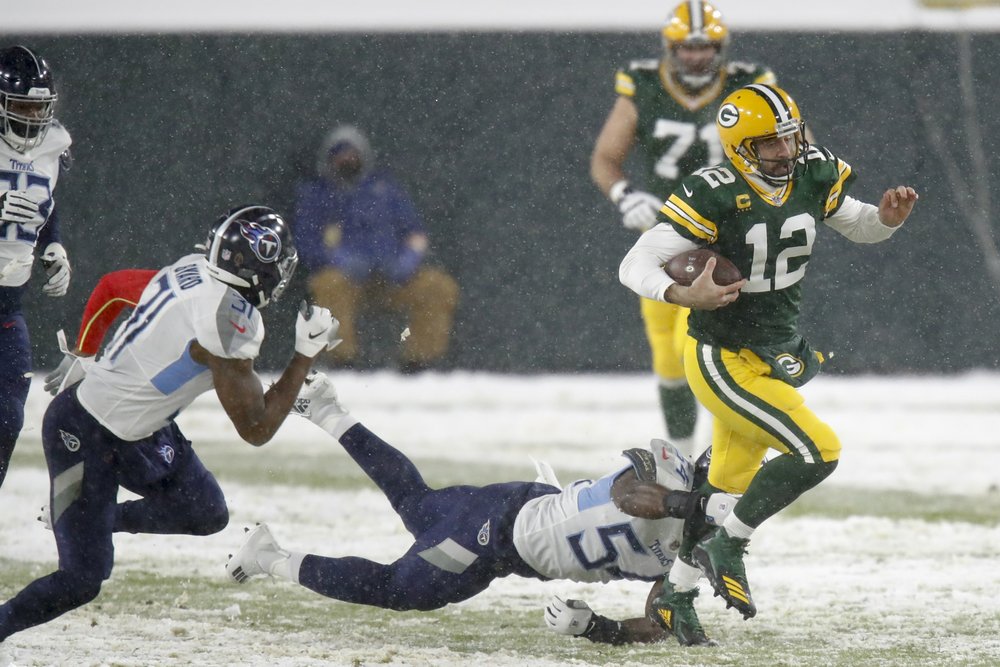 The Green Bay Packers did everything they could in the regular season to boost their chances of reaching the Super Bowl for the first time in a decade.

Now they’re hoping for some cooperation from Mother Nature.

The Packers (13-3) wrapped up the No. 1 seed in the NFC and a first-round playoff bye with a 35-16 road victory over the Chicago Bears on Sunday. Knowing they’re two home playoff wins away from a Super Bowl berth, the Packers want freezing temperatures at Lambeau Field

They want a repeat of the snowy conditions that marked their regular-season home finale, a 40-14 rout of the AFC South champion Tennessee Titans.

The Packers clinched the No. 1 seed by showing their ability to adapt.

They allowed only one sack just three days after losing Pro Bowl left tackle David Bakhtiari to a season-ending knee injury. The Packers moved usual right tackle Billy Turner to Bakhtiari’s old spot and had Rick Wagner take over at right tackle, something they also had done earlier this season when Bakhtiari missed three games with broken ribs.

And although Green Bay led the NFL in average time of possession (32:31) this season, the Packers won convincingly Sunday while having the ball for less than 25 minutes. Green Bay scored 35 points on just 44 offensive plays.

Of course, it helps to have a Hall of Fame-caliber quarterback producing one of his finest seasons and a receiver delivering one of the greatest years in franchise history.

Rodgers threw four touchdown passes Sunday to increase his season total to 48, breaking his own franchise record from his 2011 MVP season. Adams said after the game that Rodgers should have the MVP race locked up.

Adams had his NFL-leading 18th touchdown catch to tie the Packers record that Sterling Sharpe set in 1994. Adams matched the third-highest single-season touchdown total by a wide receiver in league history, behind Jerry Rice’s 23 in 1987 and Randy Moss’ 23 in 2007.

Adams finished the regular season with 115 overall receptions to break Sharpe’s franchise record of 112 in 1993. He did all that despite injuring his hamstring in the second game of the season, causing him to miss the rest of that game and the next two games as well.

“I’ll tell you what I told ’Te in the locker room,” Rodgers said after the game. “I said, (in) 13½ games, you just had the greatest season of a Packer receiver in history.”

The Packers have an NFL-leading 31.8 points per game. Rodgers’ 121.5 passer rating ranks second in NFL history, behind his own 122.5 ranking in 2011. He became the first NFL quarterback to have a passer rating of 100 or higher in 14 games within the same season. He completed 70.7% of his passes to break the franchise record he set in 2011.

Linebacker Krys Barnes, an undrafted free agent from UCLA, continued his remarkable rookie season by having a game-high 14 tackles. … Safety Adrian Amos continued his late-season surge with a game-clinching interception. … Robert Tonyan had his 11th touchdown catch to match the highest single-season total by a Packers tight end. Paul Coffman also had 11 touchdown receptions for Green Bay in 1983. … Reserve tight end Dominique Dafney, who was signed to the 53-man roster just last month, had a 13-yard reception for his first career touchdown and then made the tackle on the ensuing kickoff.

The Packers signed Tavon Austin a month ago in part to boost their return units, but the 2013 first-round pick didn’t help his cause by fumbling on a punt return Sunday.

Packers coach Matt LaFleur noted that Wagner took a big hit early in the game but continued to play. Wagner had suffered a knee injury in the Titans game. “I think this bye week will really do a guy like him a lot of good,” LaFleur said Monday. “And he’s not the only guy.”

The Packers get a week off to rest, heal and discover who they will face in the playoffs either Jan. 16 or Jan. 17. Players will practice Thursday and Friday this week.

TOP PHOTO: FILE – Green Bay Packers’ Aaron Rodgers runs for a first down during the first half of an NFL football game against the Tennessee Titans Sunday, Dec. 27, 2020, in Green Bay, Wis. (AP Photo/Matt Ludtke)