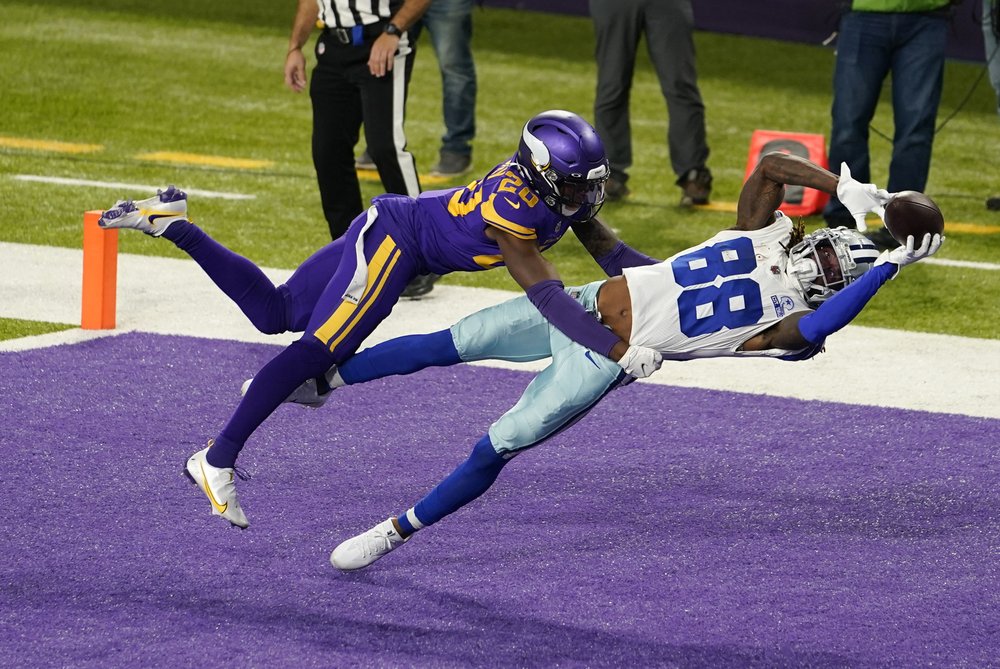 MINNEAPOLIS (AP) — For the sixth time in the last eight games, the Minnesota Vikings had their under-construction defense on the field down the stretch on Sunday with the opportunity to seal a victory.

Three times, this group of mostly inexperienced players made the stop it needed for a Vikings win. This game against Dallas went down as one of the failures.

Andy Dalton led the Cowboys on an 11-play, 61-yard drive over a span of 2:23 for the go-ahead touchdown pass in a 31-28 decision that halted Minnesota’s three-game winning streak. After thwarting late rallies at Houston, Green Bay and Chicago, the defense again showed its vulnerability against Dallas, similar to earlier lapses in losses to Tennessee and Seattle.

“It’s disappointing. I thought we were getting better defensively after the last three weeks, but that didn’t show up yesterday,” coach Mike Zimmer said.

The 42-yard touchdown run by Tony Pollard in the fourth quarter was a devastating allowance, with cornerback Chris Jones whiffing badly on what was a lax attempt at a tackle. The 2-yard toss from Dalton to tight end Dalton Schultz was the type of communication breakdown befitting of a cornerback group currently featuring two rookies and a second-year player in the top three spots.

The pre-snap motion caused confusion between cornerbacks Jeff Gladney and Cameron Dantzler about who had which receiver, leaving Schultz to break wide open on a crossing route. On the whole, Zimmer surmised there was some overconfidence in play after the recent improvement.

“I think a little bit had to do,” the coach said, “with these guys feeling their oats a little bit.”

The star trio of running back Dalvin Cook and wide receivers Justin Jefferson and Adam Thielen have helped quarterback Kirk Cousins thrive again this month after a rough start to the season.

Offensive coordinator Gary Kubiak called another shrewd game against the Cowboys, effectively using a collection of bootleg rollouts and play-action fakes to put Cousins in positions of strength despite facing a steady pass rush.

The Vikings were particularly sharp on first downs, with 17 runs for 82 yards by Cook and 10-for-12 passing for 184 yards by Cousins for an average of 9.85 yards per first-down snap. Cousins completed five passes of 20-plus yards. For the season, the Vikings have gained 40% or more of the yardage needed for a first down or a touchdown on 55.8% of their first-down plays to rank seventh in the NFL.

For all the success Cousins and the offense have enjoyed after the bye, either inside the 20-yard line or in the middle of the field, two-minute situations have continued to be an issue.

The Vikings got the ball with 97 seconds left, one timeout and 75 yards to go for the win, or just 40 or so yards to reach field-goal range, But Cousins threw three straight incompletions to end the drive before it started. Jefferson dropped what would’ve been a first-down catch over the middle. Thielen was tightly covered on a sideline throw on third down. The last try was overthrown.

In the past four games, Cousins — with assists credited to Kubiak and Cook — has nine touchdown passes, a 71% completion rate and an average of nearly 10 yards per attempt. He’s taken only five sacks and produced two turnovers during that span.

Kris Boyd replaced undrafted rookie Dan Chisena in the gunner spot on the punt coverage team and had quite the sequence in the second quarter, negating his 23-yard reception on a fake punt with an illegal shift, then giving Dallas prime field position with an illegal push during the re-kick.

Boyd played the second-most snaps among cornerbacks, but the return of Dantzler will likely eat into his usage time down the stretch. Boyd also dropped a potential game-sealing interception at the goal line, two plays before Dalton threw the go-ahead touchdown pass.

Thielen was placed on the COVID-19 reserve list on Monday, leaving him enough time to be cleared through virus protocols for the upcoming game against Carolina.

Though the Vikings still have four original starters on defense on injured reserve, with defensive end Danielle Hunter (neck) and linebacker Anthony Barr (pectoral) done for the season, and the likelihood of cornerbacks Holton Hill (foot) and Mike Hughes (neck) returning for meaningful contributions dwindling by the day, they had Dantzler (concussion) in the lineup again on Sunday after a two-game absence.

Right guard Ezra Cleveland (ankle) was missed, replaced by Brett Jones, against a Cowboys defensive line that presented plenty of problems. Tight end Irv Smith Jr. (groin) returned to action after being sidelined for one game.

Cook stayed down on the field for several seconds after a jarring blow to his midsection from safety Donovan Wilson forced a fumble during a reception in the second quarter. He didn’t miss any time.

“It’s football,” said Cook, who has averaged 31 touches over the last four games. “I can’t count the hits, but the one across the middle was a good hit.”

11 — Thielen not only leads the NFL in touchdown receptions but is the first player in Vikings history with 11 or more catches for scores over the first 10 games. The franchise season record is 17, shared by Cris Carter (1995) and Randy Moss (1998 and 2003), both Hall of Famers.

The Vikings (4-6) will be favored to win their last three home games against Carolina on Sunday, Jacksonville on Dec. 6, and Chicago on Dec. 20. With daunting visits to Tampa Bay on Dec. 13 and New Orleans on Dec. 25, there’s no room for more losses at home if they want to stay in postseason contention. They’ll probably also have to beat either the Buccaneers or the Saints to get in.

“That’s our ultimate goal, to get to the playoffs,” Cook said, “but we have to get better as a whole, and that’s our mindset.”