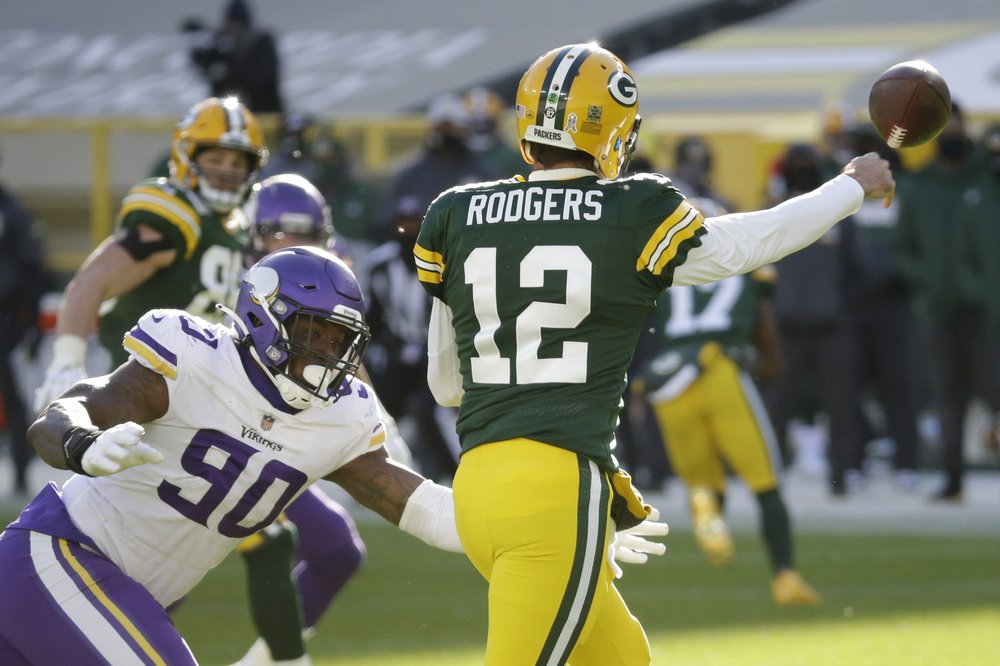 GREEN BAY, Wis. (AP) — Now that Dalvin Cook’s feeling healthy again, the Minnesota Vikings have a chance to turn around a season that seemed headed to oblivion.

Cook gained 226 yards from scrimmage and became the first Viking in over four decades to score four touchdowns in a single game as Minnesota defeated the Green Bay Packers 28-22 on Sunday.

After missing Minnesota’s last game with a groin injury, Cook looked just fine while accomplishing the mission he carried to Green Bay.

“Get my team back on track and get the team back where it needs to be at,” said Cook, who rushed for 163 yards on 30 carries and had two catches for 63 yards. “We work so hard every day, limitless hours that nobody knows. And losing don’t feel good, so getting the win today was most important to me.”

Cook’s presence gave the Vikings a major edge on a day when winds started out at 23 mph and occasionally got stronger, making it difficult to throw downfield. Green Bay didn’t have leading rusher Aaron Jones, who missed a second straight game with a calf injury.

Minnesota (2-5) needed this victory to have any realistic hopes of competing for a second straight playoff berth. Green Bay’s inability to contain Cook brought back reminders of the Packers’ NFC championship game loss to the San Francisco 49ers, when they allowed Raheem Mostert to run for 220 yards.

“We knew exactly what they were going to do in terms of they were going to ride him and also just with the conditions out there, it was pretty windy. And we never put them in a situation where they had to drop back and throw the football – or at least not too many times,” Packers coach Matt LaFleur said. “That’s something that we better get it fixed, and we better get it fixed fast, because I have a pretty good idea of what’s going to happen on a short week on Thursday in San Francisco as well.”

Each of the Vikings’ first four possessions ended with Cook touchdowns. He had two 1-yard touchdown bursts plus a touchdown run from 21 yards out. He also caught a third-and-9 pass behind the line of scrimmage and turned it into a 50-yard score that put Minnesota ahead 28-14.

The only other Vikings to score four touchdowns in a game are Ahmad Rashad in 1979 and Chuck Foreman in 1975.

Minnesota withstood a three-touchdown performance from Green Bay’s Davante Adams, who had seven catches for 53 yards.

Green Bay made it interesting at the end.

The Packers cut the lead to 28-22 when Adams caught a 7-yard touchdown pass and Jamaal Williams ran in a two-point conversion with 2:42 left. Williams was initially ruled down shy of the goal line before replays determined he had scored.

Green Bay got the ball back and reached Minnesota’s 41-yard line with 12 seconds and no timeouts left, but rookie D.J. Wonnum sacked Aaron Rodgers and knocked the ball loose. Eric Wilson recovered at the 24 as time expired.

“Part of the thing with D.J. is, and with all young players, is learning to trust your athleticism and kind of just free flowing and playing,” Vikings coach Mike Zimmer said. “I think maybe that kind of thing will help him in the future as far as (thinking), ‘I was able to do it on a big play and I can do it again.’ ”

Four times in the second half, Green Bay reached Vikings territory without scoring.

“This definitely qualifies as one of those games where if you want to be a great team, you’ve got to handle business at home,” said Rodgers, who went 27 of 41 for 291 yards. “Look, it’s not the same type of home environment (without fans). I get it. But it’s 2020 and we’re in a different NFL this year. It’s still a game we should win, a team with the trade deadline coming and questions about their coach during the week. Yeah. These are one of the games we need to win. Hopefully it’s just a reality check for us.”

Vikings: Rookie cornerback Cameron Dantzler was carted off late in the first quarter after the third-round pick’s head appeared to snap backward as it collided with teammate Anthony Harris’ thigh on a diving tackle attempt. Dantzler injured his neck and was evaluated for a concussion. … Cornerback Kris Boyd appeared to hurt his right knee in the fourth quarter.

Vikings: host the Lions on Sunday.
Packers: play at San Francisco on Thursday.