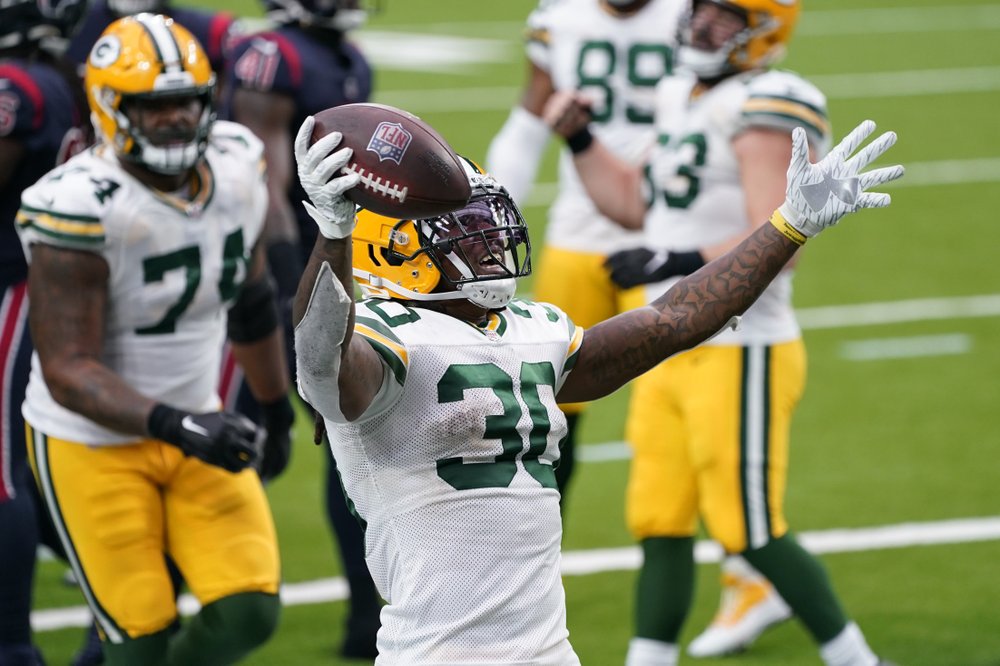 Consider the Green Bay Packers’ latest victory a testament to their depth.

That’s a strength the Packers (5-1) hope they don’t need to continue showcasing quite as much as they did Sunday in a 35-20 victory over the Houston Texans (1-6).

“Certainly when you’re talking about some pretty darn good players, you want those guys in the lineup,” Packers coach Matt LaFleur said Monday. “But it is another opportunity for whoever has to fill that void to get an opportunity to go showcase what they’re able to do.”

Plenty of Packers are capitalizing on those types of opportunities.

Jamaal Williams took over for Jones and had 77 yards rushing, 37 yards receiving and a touchdown. Malik Taylor and tight end Jace Sternberger had their first career touchdown catches.

A new combination on the offensive line gave up no sacks. Usual right tackle Billy Turner took over Bakhtiari’s spot on the left side. Rick Wagner filled in at right tackle.

Green Bay’s depth also was evident on defense, where Josh Jackson replaced King and Will Redmond stepped in for Savage.

Seventh-round draft pick Vernon Scott made an open-field tackle on third-and-goal that forced Houston to settle for a field goal. Fifth-round pick Kamal Martin came off injured reserve and made six tackles in his NFL debut. Henry Black, activated off the practice squad one day earlier, forced a fumble in the game’s last two minutes.

Rodgers added that he was proud of the way so many players made the most of their opportunities and also cited defensive lineman Billy Winn and running back Dexter Williams, who were activated from the practice squad on Saturday.

“I always talk to our guys about the expectations and standards don’t change, no matter who’s in there,” LaFleur said. “It’s awesome when you see guys step into those roles and you don’t miss a beat. We’ve got a lot of confidence in all the guys on our roster.”

Rodgers and Adams continue to form one of the NFL’s most prolific pass-catch combinations. Williams’ ability to step in for Jones showed the Packers’ wealth of talent at running back. The offensive line has overcome plenty of injuries to protect Rodgers well in every game but the loss to Tampa Bay.

The Packers must shore up their special teams after allowing Houston to block a punt and recover an onside kick. Green Bay forced and recovered a fumble in the last two minutes of the game, but that’s the Packers’ only takeaway in their last three contests.

Rodgers bounced back in a big way from his two-interception performance at Tampa Bay. Adams posted so-so numbers at Tampa Bay after missing two games with a hamstring injury, but he had one of the finest games of his career Sunday. Cornerback Jaire Alexander rarely had anything thrown his way as he continued his exceptional season. Outside linebacker Preston Smith was only credited with three tackles – one for loss – but he was all over the field for much of the game and made a big fourth-and-1 stop. Turner showed his versatility with a seamless move from right tackle to left tackle.

Marquez Valdes-Scantling had no catches Sunday and has eight receptions for 82 yards and no touchdowns over his last four games. The Packers need someone to emerge as a No. 2 wideout while Allen Lazard remains on injured reserve.

50 — This was Rodgers’ 50th career game with at least three touchdown passes and no interceptions. The only other quarterbacks in that 50-game club are Tom Brady (60), Drew Brees (54) and Peyton Manning (51).

The Packers are about to get very busy, as they host the Minnesota Vikings (1-5) on Sunday before heading to San Francisco (4-3) on Nov. 5. Green Bay won 43-34 at Minnesota on the season’s opening week.

TOP PHOTO: FILE – Green Bay Packers running back Jamaal Williams (30) celebrates after scoring during the second half of an NFL football game against the Houston Texans Sunday, Oct. 25, 2020, in Houston. (AP Photo/Sam Craft)

0
0   0
previous Wisconsin Coach Chryst Staying Quiet On QB Mertz's Status
next Dodgers 1 win from title after 32 years and more than $3.6B
Related Posts