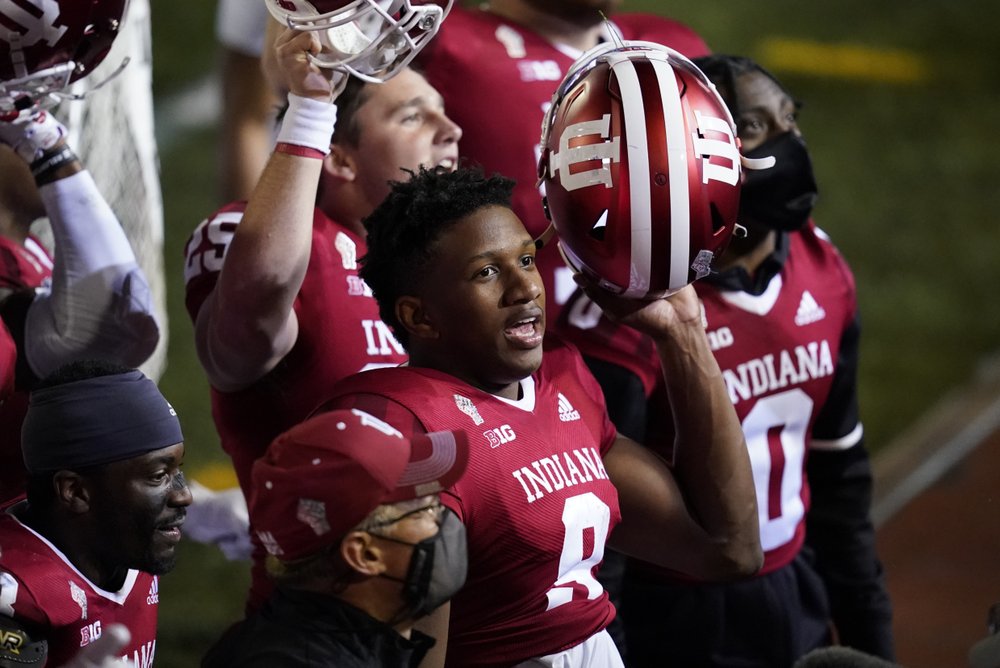 In the disjointed football autumn that is 2020, it somehow makes perfect sense that defenders were left celebrating touchdowns by running backs who accidentally reached the end zone.

Twice in one weekend, once in the Big Ten Conference on Saturday, which led to Indiana’s stunning 36-35 win over Penn State in overtime, and the other in the NFL on Sunday, when the Atlanta Falcons — who else? — flopped their way through yet another fourth-quarter fiasco in losing to the appreciative Detroit Lions 23-22.

The Falcons should have learned their lesson from the Nittany Lions 24 hours earlier.

Penn State’s Devyn Ford got the handoff with a 1-point lead at the Hoosiers 14 and only 1:42 to play in Bloomington in the rivals’ first game of the coronavirus-delayed season. The third-string tailback slowed as he approached the goal line.

If only he went down, the Nittany Lions could have run out the clock because Indiana had just one timeout left.

Instead, the sophomore tiptoed into the end zone, giving Penn State an eight-point lead but leaving Indiana just enough time to tie it and force overtime, which they did with a touchdown and 2-point conversion.

The Hoosiers then won it on another 2-point conversion when quarterback Michael Penix Jr. rolled left and dived, barely touching the pylon with the football in his outstretched right hand and giving Indiana its first win over a top-10 team in 33 years.

Penn State coach James Franklin defended his running back and refused to blame the ill-advised touchdown for the excruciating loss. But he also indicated his players were instructed not to score in that situation.

Teammate Pat Freiermuth consoled Ford afterward, imploring him to “stay off social media, head down and just flush it down, and I’ll have your back regardless.”

“I’ve been in his shoes in high school once,” Freiermuth explained. “It’s very hard to see that end zone open up like that and just think to yourself, ‘Get down.’”

If it makes Ford feel any better, Todd Gurley II made the same mistake Sunday.

The Lions let Gurley score with just over a minute remaining to get the ball back, giving Matthew Stafford enough time to drive the Lions to the winning TD as time expired.

T.J. Hockenson’s 11-yard TD grab tied it and Matt Prater nailed a 48-yard extra point to give the Lions a 23-22 win after an excessive celebration penalty moved the ball to the 30-yard line.

Trailing 16-14, the Falcons were trying to run down the clock and kick a chip-shot field goal for the win when they picked up a first down at the Lions 10 with just over a minute remaining.

The Lions had used up all their timeouts on the drive, so their only hope was to allow a quick TD and they got out of the way as Gurley took the handoff from Matt Ryan. Only safety Will Harris got a hand on the runner, but he released Gurley about 3 yards shy of the goal line.

Gurley realized what the Lions were doing and tried to go down shy of the end zone, but his momentum carried him too far as he landed on the goal line with his ball-carrying left hand.

As Gurley fell across the goal line, Lions linebacker Jamie Collins signaled touchdown as his teammates celebrated around him.

“My job is just going down,” Gurley lamented. “I’m taking all the responsibility.”

The Falcons converted a 2-point conversion to make it 22-16, but Stafford had just enough time to deliver another stunning fourth-quarter dagger to the Falcons, who fired their head coach earlier this month after becoming the first team to ever blow back-to-back 15-point fourth-quarter leads.

“I was mad as hell,” Gurley said of his game-losing touchdown. “I was trying not to (score), but my momentum took me in. It’s kind of crazy.”

0
0   0
previous Clemson QB Lawrence: ‘I have the option’ to leave or stay
next Nightmare scenario: What happens when outbreak hits QB room? Badgers QBs out with COVID-19
Related Posts