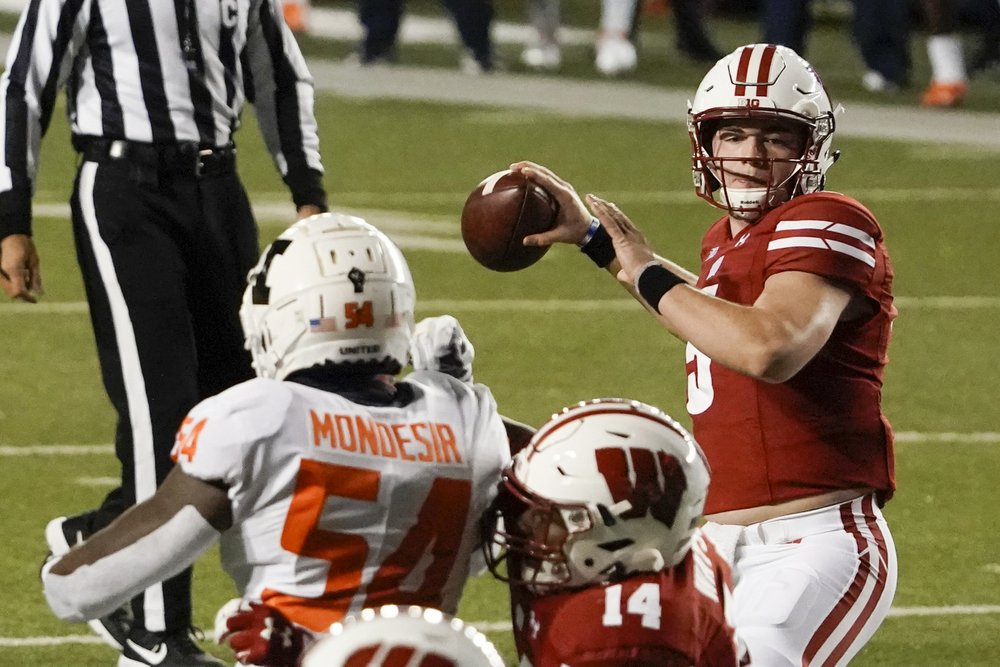 “I will not, cannot and should not therefore comment about anything dealing with our testing and coronavirus,” Chryst said Monday.

Chryst did say he was confident the ninth-ranked Badgers’ game Saturday at Nebraska (0-1) would go on as scheduled.

The Milwaukee Journal-Sentinel and Wisconsin State Journal both reported that Mertz had tested positive. The Journal-Sentinel reported Mertz’s positive test came Saturday, one day after the Badgers’ 45-7 season-opening home victory over Illinois.

Both papers reported that Mertz would be undergoing a second test to determine if the first result was a false positive.

Big Ten protocols say that athletes who test positive through point-of-contact daily testing must take a polymerase chain reaction test to confirm the first result. If that second test confirms a positive result, the athlete can’t play again for at least 21 days.

Chryst said he has no problem with the Big Ten’s 21-day policy, which is more stringent than those of most conferences regarding players who test positive. Wisconsin (1-0) visits Nebraska, hosts Purdue and travels to No. 13 Michigan in its next three games.

“The No. 1 concern for the league, and I appreciate this, was how do we best keep everyone as safe as possible regarding the virus, and then how do you manage the impacts of it when someone has it,” Chryst said. “Admittedly, they told us it was more conservative, and if that helps one person, then that’s a good thing for us. We’ve known that there was a lot of work that went through this. For us to play, if that is something that’s in the best interest of everyone involved, then I completely support it.”

Wisconsin issued a statement Sunday night saying that no players, coaches or staffers tested positive or showed any symptoms before Friday’s game. School officials said they wouldn’t release any testing information regarding individual athletes due to privacy concerns.

An athlete who tests positive must undergo comprehensive cardiac testing and then receive clearance from a cardiologist designated by the university before returning to action.

He was playing because returning starter Jack Coan underwent surgery on his right foot Oct. 6, leaving him out indefinitely. Wisconsin’s only other scholarship quarterbacks are sophomore Chase Wolf and junior Danny Vanden Boom.

Wolf entered the Illinois game late in the fourth quarter but didn’t attempt a pass. He played one game last year and completed his only pass for 2 yards.

“It doesn’t matter what position, as long as I’ve been a part of football, there’s opportunities that come,” Chryst said. “We saw it with Jack getting hurt, right? It’s no different at any other position. Obviously this year there’s some things that will be unique. Hopefully it’s unique just to this year.”