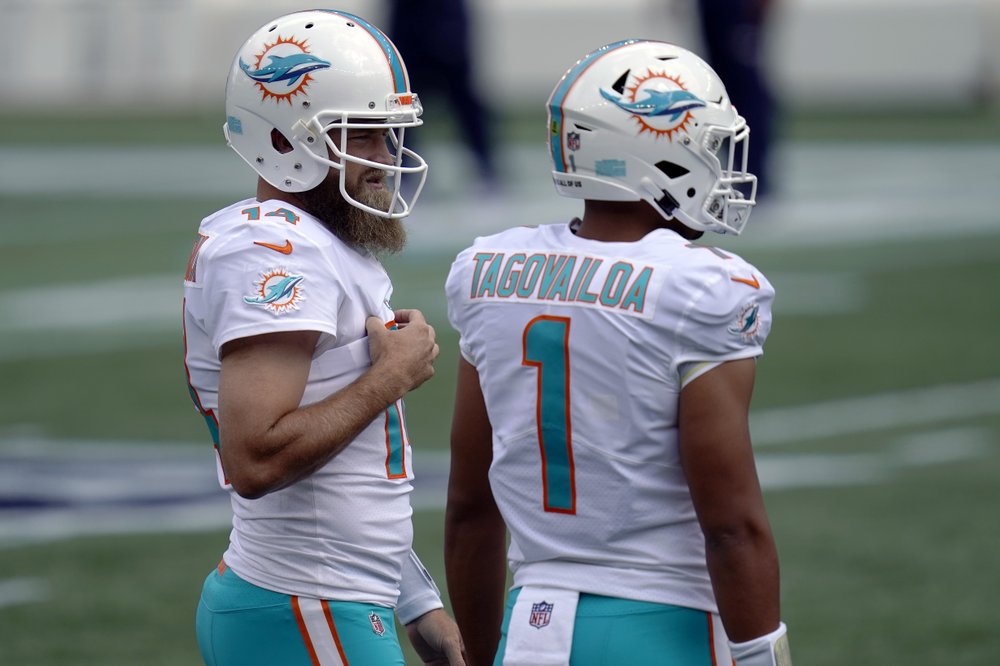 Flores said he regretted that most of his players found out about the change through social media rather than from him, and said benching Fitzpatrick was a difficult decision.

“Fitz has done a great job,” Flores said Wednesday. “But we felt like for the team now, moving forward, this is a move we need to make.”

Tagovailoa, the fifth pick in the April draft, will make his first NFL start on Nov. 1 against the Los Angeles Rams after Miami’s bye this week.

The Dolphins (3-3) have won their past two games by a combined score of 67-17, and Fitzpatrick said he was shocked by the timing of his demotion.

“It definitely caught me off guard,” the 16-year veteran said. “It was a hard thing for me to hear. Digesting the news, my heart just hurt all day.

“This eventually was going to happen; it was a matter of when and not if. It’s still a tough thing for me to hear, and to now have to deal with. But I’m going to do my best.”

Flores told Fitzpatrick and Tagovailoa of his decision Tuesday, but the news leaked before the coach could share it with other players.

“The one thing in this situation that’s unfortunate is that I didn’t get a chance to address the team before this was out in the media,” Flores said. “It’s not the way I or we want to do business. Unfortunately, it’s kind of the way of the world right now.

“I’m not happy about that at all. I’ll address that to the team, and really apologize to them that they had to find out through social media. I don’t think that’s fair to them.”

Flores shed little light on his reason to switch quarterbacks now. Tagovailoa made his NFL debut during mop-up time last week, completing both passes in his first action since suffering a serious hip injury last November that ended his Alabama career.

Even Tagovailoa’s parents were surprised to hear of their son’s promotion.

“They didn’t believe me for a little bit,” Tagovailoa said. “My dad joked, ‘After two throws, they want to put you in?’”

The two Dolphins QBs have what Tagovailoa laughingly described as a father/son relationship, and they said that will continue. But both agreed that for the moment, the situation is awkward.

“This profession is interesting,” Fitzpatrick said, “in that I basically got fired, and my day of work today basically consists of me in Zoom meetings listening to the guy that fired me, and then locked in a room with my replacement for four hours. There aren’t a whole lot of jobs like that.”

While the 37-year-old Fitzpatrick is popular with his teammates, captain Jerome Baker said the locker room is excited Flores is giving Tagovailoa a chance to show what he can do.

“We just put all our trust in Flo,” Baker said. “If he says Tua is the man to lead us, we’re going to go with it.”

Fitzpatrick, in his second season with his eighth NFL team, has been characteristically inconsistent this year. He is fifth in the the league in completion percentage but third in interceptions with seven.

“Fitz has been great for the last year and a half,” Flores said. “I don’t know if there has been anybody more instrumental in trying to instill the culture that we’re looking for. He has made an impact on Tua and a lot of other players on this team. I have a great respect for him, and that made this decision very tough.”

Even so, it was a decision anticipated since the day Miami drafted Tagovailoa as a potential franchise quarterback. The cancellation of offseason drills and exhibition games because of the coronavirus slowed his NFL development, and two weeks ago, Flores said Tagovailoa wasn’t ready to start.

“He has gotten more comfortable,” Flores said. “Accuracy, decision making, all those things have been good in practice. Practice is very different from games, but we’re comfortable and confident he’ll be able to be competitive.”

“Opportunities come,” Tagovailoa said, “and when they come, you’ve got to take them and run with them.”