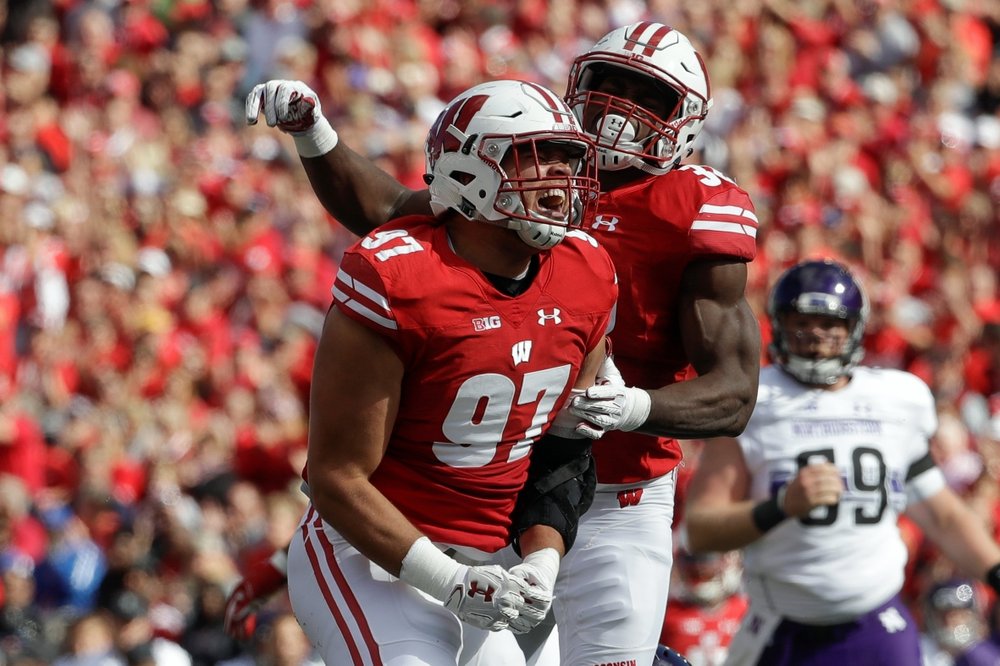 Wisconsin traditionally wins games because of its running game and defense.

Now that Jonathan Taylor has moved on to the NFL, that would seem to put more pressure on the defense to carry the load as the Badgers’ offense adjusts to life without the two-time Doak Walker Award winner.

The defense looks forward to that challenge.

The defense will need to live up to that potential for Wisconsin to reach the Big Ten championship game for the fourth time in five years. The 14th-ranked Badgers open their pandemic-delayed season Friday night by hosting Illinois.

“The chemistry is there,” cornerback Caesar Williams said. “The playmaking is there. It’s just (time to) put it on film.”

Williams is one of three returning starters in a secondary that also features cornerback Faion Hicks and safety Eric Burrell. Wisconsin also has three defensive linemen who made at least six starts in Loudermilk, Garrett Rand and Keeanu Benton.

Linebacker Jack Sanborn had a team-high 80 tackles plus 5 ½ sacks and three interceptions last season. Sanborn sees ways in which Wisconsin’s defense can be even better this season.

“Last year you’d look at games and we’ve got some guys doing one thing, some guys doing another,” Sanborn said. “That’s just one area we’ve talked about a lot that we believe we can clean up, and something that we need to clean up.”

Wisconsin’s biggest task on defense is replacing the playmaking ability of departed outside linebackers Zack Baun and Chris Orr, who combined for 24 of the Badgers’ 51 sacks last season. Baun was an Associated Press All-America second-team selection.

“We feel like we have guys who can step in those roles and create plays and be dynamic for us,” defensive coordinator Jim Leonhard said. “But at the same time, we’re not going to ask them, ‘Hey, do what Chris did,’ or, ‘Do what Zack did.’ That’s not fair to them.”

Leonhard’s presence is part of the reason the Badgers are so optimistic they’ll be even better on defense this year. Burrell refers to his coordinator as a “genius.”

The former Wisconsin player began his college career as a walk-on in 2001 and went on to play 10 years in the NFL. Leonhard returned to his alma mater as an assistant coach in 2016 and was promoted to defensive coordinator a year later.

Wisconsin produced 104 takeaways during Leonhard’s first four seasons on staff to rank second among all FBS teams. Wisconsin ranked third nationally in scoring defense (17.2) and fourth in total defense (297.9) from 2016-19 while building a reputation across the Big Ten.

“They’ve got a good scheme,” Illinois offensive coordinator Rod Smith said. “They play physical. They play hard. They do everything that you’d expect a good defense to do. That’s exactly how they’re coached. That’s the culture.”

Illinois still beat Wisconsin 24-23 last year in one of the season’s biggest upsets, though the Badgers went on to win the Big Ten West Division and finish 10-4.

Wisconsin’s defense now wants to build on that success even without the pass-rushing prowess of Baun and Orr. Coach Paul Chryst can’t wait to see how this experienced group develops.

“I like the group a ton,” Chryst said. “We do have a lot of guys who’ve played. But I think it’s also exciting because it’s a new year. This group can kind of write their own story. That’s the opportunity that’s in front of everyone as the season begins.”

TOP PHOTO: FILE – FILE – In this Sept. 30, 2017, file photo, Wisconsin’s Isaiahh Loudermilk (97) and Leon Jacobs celebrate after a sack of Northwestern quarterback Clayton Thorson (18) during the first half of an NCAA college football game in Madison, Wis. Wisconsin traditionally wins games primarily because of its running game and defense. Now that Jonathan Taylor has moved on to the NFL, that would seem to put more pressure on the defense to carry the load as the Badgers’ offense adjusts to life without the two-time Doak Walker Award winner. The defense looks forward to that challenge. (AP Photo/Morry Gash, File)