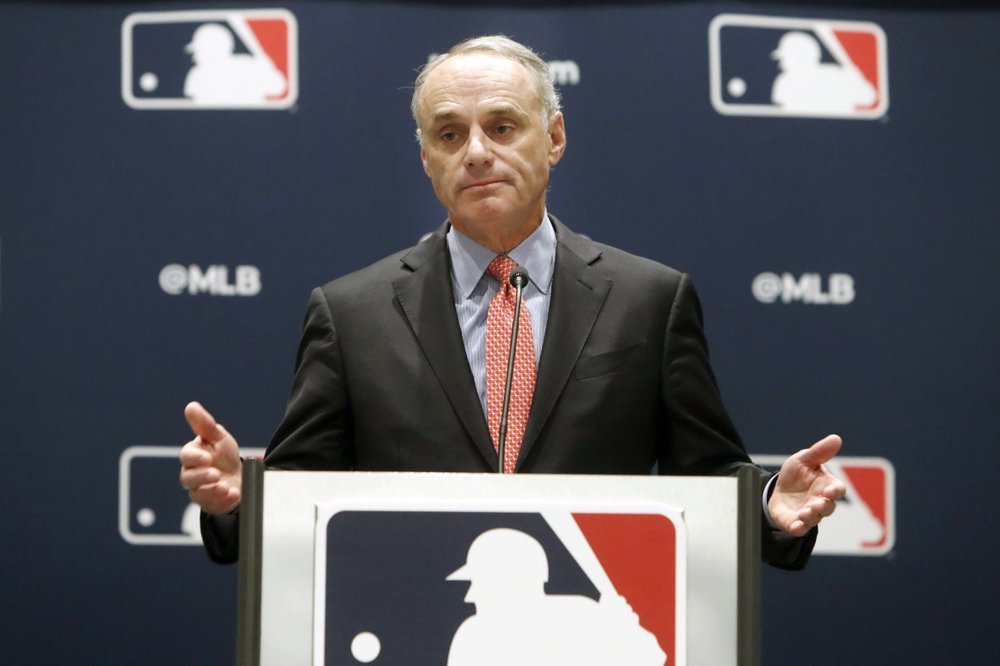 ARLINGTON, Texas (AP) — Ahead of a World Series capping the pandemic-shortened season, baseball Commissioner Rob Manfred said he hopes to keep two of this year’s innovations: expanded playoffs and starting extra innings with runners on second base.

“People were wildly unenthusiastic about the changes. And then when they saw them in action, they were much more positive,” Manfred said Tuesday during an interview with The Associated Press.

Manfred said the 30 teams combined for $3 billion in operating losses due the coronavirus pandemic, which caused all 898 regular-season games to be played in empty ballparks without fans.

After opening day was delayed from March 26 to July 23, MLB and the players’ association agreed to expand the number of teams in the playoffs from 10 to 16. Even before the pandemic, Manfred advocated a future expansion of the playoffs to 14 teams.

“I like the idea of, and I’m choosing my words carefully here, an expanded playoff format,” Manfred said. “I don’t think we would do 16 like we did this year. I think we do have to be cognizant of making sure that we preserve the importance of our regular season. But I think something beyond the 10 that we were at would be a good change.”

With the added runner rule, the longest of 68 games of 10 innings or longer were a pair of 13-inning contests, according to the Elias Sports Bureau.

“I think the players like it,” Manfred said. “I think it’s really good from a safety and health perspective that keeps us from putting players in situations where they’re out there too long or in positions they’re not used to playing.”

Union head Tony Clark said it was too soon to commit to changes for 2021. The sport’s labor contract runs through 2021, and the union’s agreement is needed to alter the 2021 structure.

“We made a number of one-year changes this season under unique circumstances,” Clark wrote in an email to the AP. “We are gathering feedback from players and we’ll bring that to the league at the appropriate time. Obviously, protecting health and safety will remain among several important considerations as those talks unfold.”

Manfred is concerned about whether fans will be allowed to attend games next season.

“We understand what happens with fans is going to be a product of what happens with the virus, what decisions public health authorities make in terms of mass gatherings,” he said. “It is a huge issue for us in terms of the economics of the game. The losses that I referred to earlier were basically in stone when we started the season because we knew about 40% of our revenue is gate-related and we knew we weren’t going to have it.”

“The clubs have done a really good job locally and we tried to do a good job centrally,” he added. “The liquidity is sufficient to get us through 2020. I think if we’re faced with limited activity next year and the kind of losses that we suffered this year, again, it will become more of a problem.”

Manfred was pleased with the rule he pushed for forcing pitchers to face a minimum of three batters or to finish the half inning.

“There’s nothing about what happened this year that has changed, not only in my mind, but anybody in the game’s mind about it, and I think that’s here to stay,” he said.

He would not say whether he favors keeping the expansion of the designated hitter to the National League, citing the need to bargain on the topic with the players’ union. The expansion of active rosters from 26 to 28 players was specific to the stop of spring training in March and resumption in the summer.

Manfred also did not draw conclusions about the average time of a nine-inning game, which increased to a record 3 hours, 7 minutes, 46 seconds, up from 3:05:35 last year. The cause likely was tied to expanded rosters and increased pitching changes.

He also thought it was difficult to analyze whether the drop in the major league batting average to .245, its lowest since 1968, was cyclical or an anomaly,

“What people are telling me about kind of every measure for this year in terms of statistics is that 60 (games) is just not a great sample size and you shouldn’t really put too much weight on it,” he said.

Management and the union battled publicly through the spring, with players demanding prorated pay for the shortened season that had been agreed to in March as part of a deal that included salary advances. They dared Manfred to unilaterally issue the regular-season schedule, which he did, then bargained and reached agreements on expanded playoffs and a bubble for the last three rounds of the postseason.

“We got a lot of important things done this year with the union,” Manfred said. “We had the problems early, Tony was active not only in helping to strengthen protocols, but in encouraging players to adhere to the protocols. And the negotiation over the bubble was not an easy thing. It involved further changes for players, dislocations for players.”

While 45 regular-season games were postponed for COVID-19-related reasons, many involving the Miami Marlins and St. Louis Cardinals, just two were not made up. Teams refused the union’s requests to play a longer regular season that would go deeper into the autumn.

“We did not want to extend the season beyond Oct. 27. Just think about it, put it in some perspective, if we were still playing in the regular season, just 15 games a day in different cities, given where the virus is right now, it would be a really, really difficult situation, and then still having to get through the playoffs in November. Given what everybody’s saying about the virus, the trends we’re seeing, it was crucial that we stick to that Oct. 27.”

He also said the lack of doubleheaders in the original schedule turned out to be key.