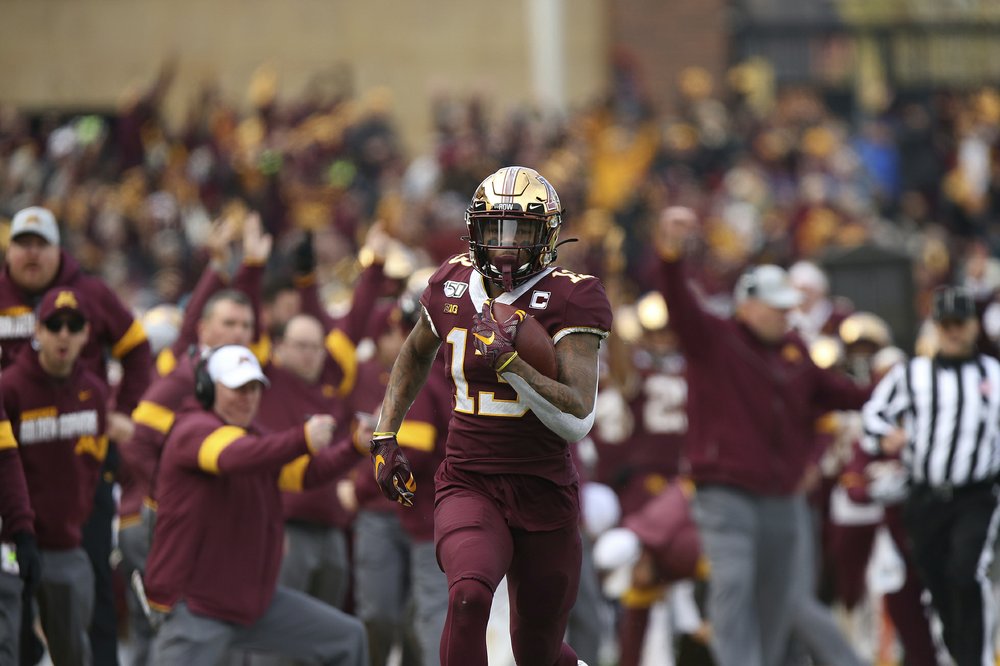 Getting Bateman back could be game-changer for Gophers

Getting Bateman back could be game-changer for Gophers

MINNEAPOLIS (AP) — When Big Ten football went on hiatus, Tanner Morgan settled in with the rest of Minnesota’s quarterbacks for some extra study of the details while getting up to speed on a new playbook.

This summer football school of sorts featuring footwork, fronts and coverages was bound to pay off for Morgan at some point, whether or not the 2020 season was going to take place.

Once the conference consented to playing this fall, Morgan and the Gophers got an even bigger boost when Rashod Bateman, the Big Ten receiver of the year in 2019, decided to opt back in. He initially ruled himself out to prepare for the pros and preserve his health during the coronavirus pandemic.

“I thought he was joking at first,” Morgan said recently, recalling their phone conversation after the Sept. 16 conference announcement. “It’s something we’re really excited about because he wanted to do it for the team. Not for Rashod, for the guys in the locker room, for Minnesota.”

Morgan led the Big Ten with an average of 250.2 passing yards per game last year, fueled by the dominant duo of Bateman and Tyler Johnson, who was taken in the fifth round of the NFL draft by the Tampa Bay Buccaneers. Chris Autman-Bell is back in the mix, too, but the return of Bateman ought to go a long way toward helping the Gophers pick up where they left off with their program-changing 11-2 finish in 2019. They’re ranked 24th in the latest Associated Press poll.

“He was literally my first call,” coach P.J. Fleck said, after hearing the news that the season was on.

Bateman contracted COVID-19 during the summer and experienced significant symptoms, a major reason for his initial discomfort. He made that announcement a week before the Big Ten called off the season. The restart came with more stringent safety and testing measures. Satisfaction with the protocols changed his mind. Motivation to play for his coaches and teammates brought him back.

“I owe them all I’ve got while I can,” Bateman said.

Seven starters have departed on defense, including four NFL draft picks. While the absence of safety Antoine Winfield Jr. will be the most noticeable, the Minnesota-grown linebackers — Thomas Barber, Carter Coughlin (who eventually became a defensive end) and Kamal Martin — the Gophers have leaned on since Fleck arrived in 2017 are now all gone.

That leaves junior Mariano Sori-Marin as the leader in the middle. He started seven games last year, filling in for Martin. Fleck called Sori-Marin one of the most intelligent and passionate players on the team, one who is versatile enough to play all three linebacker spots.

“Our defense is taking over his personality,” Fleck said.

Braelen Oliver, another starting linebacker candidate, was injured in spring practice, jeopardizing his status for the season.

The graduation of Rodney Smith and Shannon Brooks took two of the top three running backs off the roster, but junior Mohamed Ibrahim — who led the team in 2018 with 1,160 rushing yards in just 10 games while Smith and Brooks were injured — ought to ensure there’s no drop-off in productivity on the ground for the Gophers. Smith was the third-leading rusher in the Big Ten last year.

Watching clips of new offensive coordinator Mike Sanford’s past work at Utah State, Western Kentucky, Notre Dame and Boise State has caught Ibrahim’s attention that he’s likely going to be catching the ball more, too, whether on screen passes or quick throws.

“Just emphasizing I have to be able to be an all-around back now,” Ibrahim said.

While Bateman’s return promises to be a game-changer for the Gophers, they’ve been bracing for other opt-outs. Wide receiver and kick returner Demetrius Douglas, who is on track to graduate in December but had two seasons of eligibility remaining, decided to call it a career. Fleck said Oct. 5 during his most recent news conference that he was waiting for a “small number” of players to determine their status before finalizing the roster.

The elimination of nonconference games in this truncated season scrapped a Sept. 26 visit by independent BYU — currently ranked 14th in the Associated Press poll — that would have been the first meeting between the programs. Florida Atlantic and Tennessee Tech were also on the original slate, as was a Big Ten contest at Michigan State.

Now the Gophers will open Oct. 24 against No. 19 Michigan, a team they haven’t beaten at home since 1977 in the lopsided series for the Little Brown Jug Trophy.

The Gophers have four night games over the first five weeks, including three Fridays: Oct. 30 at Maryland, Nov. 13 against Iowa, and Nov. 20 against Purdue. Here’s a quirky statistic: Minnesota is 6-0 under Fleck in games not played on Saturdays.

TOP PHOTO: FILE – In this Nov. 9, 2019, file photo, Minnesota wide receiver Rashod Bateman (13) runs the ball down the field for a touchdown against Penn State during an NCAA college football game, in Minneapolis. Bateman initially opted out of the season on Aug. 4, citing concerns about playing amid the coronavirus pandemic, instead signing with an agent and focusing on the NFL draft. But he changed his mind when the Big Ten returned Sept. 16 with daily testing and earned special reinstatement from the NCAA. (AP Photo/Stacy Bengs, File)

0
0   0
previous No. 16 Badgers ready to contend again after offseason losses
next As football opens, Wisconsin’s other fall athletes must wait
Related Posts